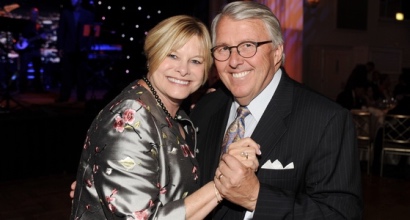 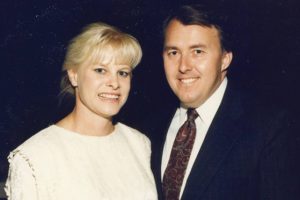 Sitting with Debby Benton on a sunny Thursday afternoon on main campus, the first question of the interview wasn’t mine.

“Chocolate,” I said and she smiled and handed me a bag containing a Starbucks chocolate cake pop.

The interview was off to a great start.

This wasn’t the first time the Graphic has had the opportunity to sit down with Pepperdine’s longest serving first lady. Debby participated in a Q&A back in 2012 and talked with senior Nicola Wenz, reporter, earlier this year, but she seemed just as happy to chat to me as if I was the first to ever reach out.

Debby sat poised in her seat, sunglasses on, seeming happy to just be. She said she intentionally chose a spot in the sun and I agreed it was a perfect pick.

Debby said if she had to sum up her experience at Pepperdine in one word, it would be “exciting.”

“We have just done all kinds of different things,” Debby said. “It’s been very interesting and we got to do things we didn’t ever think we’d ever do.”

And the list of things Debby and Andrew K. Benton have done during their 19 years as first lady and president at Pepperdine is long.

The Bentons first moved to Pepperdine in 1985, as Andrew had just taken a job on Pepperdine’s law team battling the California Coastal Commission, Debby said. Debby was a stay-at-home mom at the time, raising their 2-year-old daughter with a son on the way. In 2000, the Board of Regents chose Andrew to be Pepperdine’s seventh president.

“It was big,” Debby said. “It felt a little daunting at first, but we soon made a lot of friends.”

“Fourteen or fifteen years [ago], Norvel and Helen Young wanted to start the Boone Center for the Family to help Christian families in several different ways and I thought, you know, Pepperdine is the perfect place to do this and it’s just kind of evolved from there,” Debby said. “I think it just came because I naturally just gravitated towards it and like what they do.”

One of the fundraisers the Boone Center for the Family puts on is called Savvy Chic. Savvy Chic, Debby said, is a fashion show in which students participate as well as a live and silent auction and a luncheon. Debby was honored at the 2018 SavvyChic event in November for her “support, advocacy and leadership,” according to the event’s website.

Debby tells a story, however, not of leadership and orchestration, but of service and assistance. She spoke about food tastings with friends to pick out the luncheon menu, shopping for items for baskets to maximize the amount of money raised and coordinating the fashion show with designers. It was becoming a theme in the interview for Debby to remember funny moments or anecdotes rather than listing her accomplishments.

One of Debby’s responsibilities as the first lady is organizing and hosting events and lunches to connect with donors and other notable guests. Some of the prominent people the Bentons have met are Margaret Thatcher, Barbara and George Bush and Gerald Ford, Debby said.

“The people we’ve met and gotten to really know as people have been really special,” Debby said.

Though she did share, a little exasperated, that Andrew invited Gerald Ford over to Brock House to nap before a board meeting without giving her enough time to clean up beforehand or telling her who was coming over.

“It was when our kids were young, the house was a disaster,” Debby said. “[Andrew] said, ‘Oh no big deal, it’ll be fine,’ and then here comes Gerald Ford and I was like, ‘Really?'”

When asked about her legacy, one thing Debby said she hopes students will remember is the time they spent at Brock House. Students are invited over to Brock House for several different events during their time at Pepperdine, from the President’s Reception during New Student Orientation to Senior Sundays, Rock the Brock and the Etiquette Dinner, which is hosted the final Sunday of spring semester.

“We try to have a lot of students in our home [for] different things,” Debby said, “I just hope people think ‘Oh it was fun, they let us come to their home a lot and we did things.’ But I also want the Brock House to be special.”

Debby said the Etiquette Dinner was started after, during one Senior Sunday, a student shared that her family did not sit and eat together for meals and so she never learned the proper way to eat. Students had also expressed to the Bentons that they were being asked to do lunch interviews for jobs, so the Bentons took it upon themselves to teach proper dining etiquette – from first dates to formal interviews.

But the Brock House is also a home and has been home to the Bentons for almost two decades now. Debby said she loves interior design and decorating Brock House, but it can be hard to maintain a look that everyone will enjoy.

“I love decorating,” Debby said. “Everything I did in the Brock House, I’ve had to think, ‘Will everyone love it?’ because the next people may be stuck with it for years and years. So I’m looking forward to having our home done exactly the way I would choose whether anyone else likes it or not.”

But other than Brock House, Debby said she would want the Bentons to be remembered as “being good” with the students, staff and faculty.

“I like to think that we’ve made it better than what we found it,” Debby said.

Both of the Bentons are dedicated sports fans and attend every game they can, Debby said.

“If there’s a game and we don’t have something we have to do, we’re there,” Debby said. “Andy teases that I’ve never heard a call against our team that we like. He can sit and watch a game very quietly and I cannot. It just drives me nuts. It takes me a lot of water to get through sporting events.”

The couple’s support of sports spreads far beyond home games.

“We had always decided when he became president, if one of our teams made it to the national championship, we would try to both go or at least one of us,” Debby said. “And it seems like normally he’s been tied up and I’ve gotten to go and that’s been a lot of fun for me.”

“It was really kind of embarrassing,” Debby said “Neither of us have done anything athletic except go and cheer.”

As for the Bentons’ future plans, Debby said she’s looking forward to having more opportunities to travel. Andrew has wanted to do a tour of the South called “Civil Rights, Barbecue and Blues,” but hasn’t had enough time, Debby said. So that will be a trip they plan to take.

“Only I’m going to change it a little,” Debby said. “Cause when he does it, he wants to stay …. in some really cruddy places because they’re authentic. But when I do it, I want to stay in some nice places; the beautiful Southern hotels, because we’ll be more in the South.”

The family will be moving and taking their 12-year-old dog Scout with them (named after the family’s favorite protagonist of “To Kill a Mockingbird,” Debby said). Debby said the Bentons are excited to “be on [their] own schedule.”

“I’m looking forward to … not having to worry about what next week holds,” Debby said.

But this doesn’t make leaving easy. When asked if there was anything she would miss about Pepperdine, Debby immediately said the students.

“I think you guys keep us young, or make us really old,” Debby said. “It’s nice to learn what you enjoy and what you like. And you give us hope. Some schools, I feel like they see the worst in the kids. But I feel like Pepperdine just gets the cream of the crop.”

After 19 years of experience, Debby’s advice for the next first lady of Pepperdine, Joline Gash, is simple and honest.

“Just make it your own,” Debby said. “Enjoy. I think this is really a great job to get closer to your husband. I’ve enjoyed it, it’s been fun.”

Nicola Wenz contributed to this reporting.