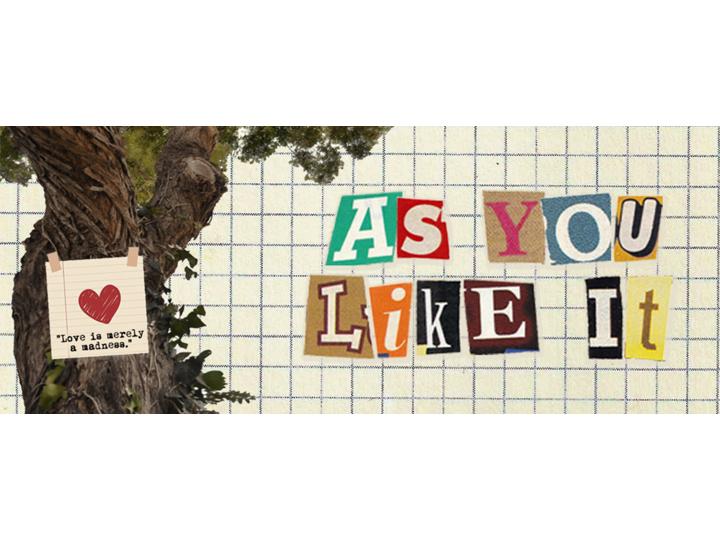 The artwork for “As You Like It” from the play’s webpage shows a modern artistic interpretation of the classic play to advertise the virtual show and will be streamed over Zoom from April 9-11. Senior Layla Dillig said she likes the way this digital production blends modernity with a timeless Shakespearean story. Photo Courtesy of the Lisa Smith Wengler Center for the Arts

“As You Like It” is a classic Shakespearean story about cousins Rosalind and Celia, the fool Touchstone and the young man Orlando escaping the evil Duke Frederick, set in the forest of Arden. There are love stories, questions about the meaning of life and themes of exile and banishment.

“Shakespeare’s timeless tale about the education of the heart is full of music, humor, and romance,” according to the official webpage for the production. “And in his heroine Rosalind, we experience Shakespeare’s masterful wit in its most exquisite form.”

Senior Theatre Acting major Clayton Mattingly, who plays Orlando, said the process of preparing to do a show remotely, with the cast and crew never physically in the same space, was difficult at times and required everyone to rely on each other.

“Our entrances are whenever we press start video, so it’s a lot of trust that everyone starts their video, unmutes at the right times, sets up all their equipment correctly, and we all kind of have to trust that we all do the same things and some good art will come out of it,” Mattingly said.

“We all kind of understand how it feels to be exiled or banished currently,” Mattinlgy said. “Whether it be to our rooms or to our parents’ houses or wherever, due to COVID.”

The play’s director, Associate Professor of Theatre Hollace Starr, said she made it a priority to ensure that all of the cast members felt connected to each other and to the story, despite everyone being physically disconnected.

“We have ensemble moments throughout the play that have been fun to develop with the cast, and that seem to do what I set out to do, which is to kind of let everyone have an important identity within the play,” Starr said.

Both Mattingly and Starr said not being able to practice in person with the whole cast and crew has been an unusual experience they had to work through.

“Instead of everyone being in one room, and kind of feeling like those energies are literally in the space between the actors, everyone’s in 13 different spaces and so it kind of feels sometimes like keeping 13 balls in the air,” Starr said.

Even their traditional rehearsal schedule changed to accommodate the online format, as Starr said she didn’t want to cause Zoom fatigue for her cast. Usually for a show like this, the cast would rehearse six days a week: four hours on week nights and anywhere from four to six, or more, hours on Saturdays.

“I knew that that was untenable for a Zoom schedule,” Starr said. “It’s just not possible for anyone to endure.”

Even though rehearsing “As You Like It” on Zoom has been challenging, senior Theatre Acting major Layla Dillig, who plays Rosalind, said there are benefits to performing virtually — the cast and crew are able to utilize technology to do new and innovative things with the show.

“I’m really excited that we kind of took a classical text like Shakespeare, and first of all, made it available to the modern audience, but also connected it so closely to a thing like technology which is so not Shakespearean,” Dillig said.

Junior Theatre Acting major Yayabell Debay, who plays Duke Senior, said she hopes to be a film actor one day, so doing an entire play virtually gives her and the rest of the cast the opportunity to hone their screen-acting skills.

“It’s almost like we had to morph our acting into a different medium, which is a very cool talent to have in the first place, so we can do theater, and are equally savvy with camera [acting],” Debay said.

“As You Like It” is Dillig’s final production at Pepperdine, and while she said she wishes she could give her castmates, director and crew a hug before leaving, she is very grateful they made a show happen for the seniors who are leaving, and the first-years who are just beginning their Pepperdine theatre experience.

“I think we made the best out of the worst situation,” Dillig said.

It is free to attend the virtual performances of “As You Like It,” but anyone who is interested must register on the play’s official webpage. Viewing links will be sent to everyone who registers to attend.