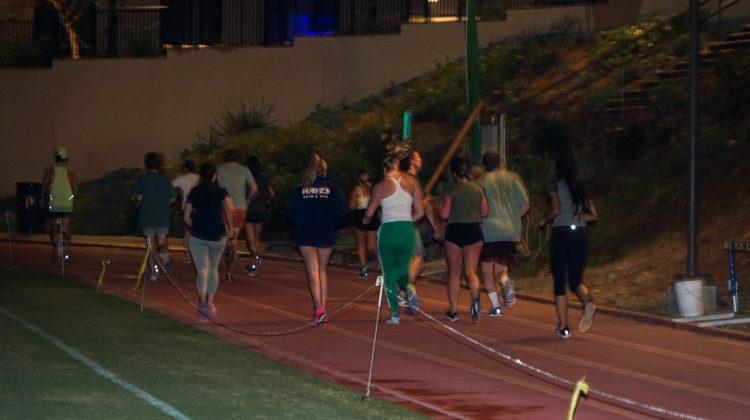 Running Club members run on the Stotsenberg Track at the weekly Thursday night meeting March 17. Co-President Grace McPhaill said the goal of Running Club has been to give students an opportunity to build community while staying active. Photos by Gabrielle Salgado

Pepperdine Running Club saw its membership triple from 20 when school was virtual to 60 when campus reopened for in-person activities in fall 2021. With three events a week and teams participating in the Pacific Crest Trail Challenge, members have the opportunity to immerse fitness, passion and community into their daily lives, Running Club Co-President and senior Grace McPhaill said.

When McPhaill became co-president alongside senior Jacob Erbes in summer 2021, she said she wanted Running Club to be an outlet for new and returning students to come together. Since 2020, Running Club has become a fundamental part of many Pepperdine students’ lives, McPhaill said.

“It’s the people that are making this club, and that’s what makes us the best that we are,” McPhaill said. “We can help you reach your goals in whatever way, but we are equally celebrating what everybody is able to do — whether you’re looking to be more active or you’re like, ‘I want to run a half [marathon].’”

While school was remote, the Running Club thought of creative ways to keep people on their feet, McPhaill said. The club created a challenge for members to run three times a week, which McPhaill said carried into the 2021-22 academic year.

McPhaill said she quickly realized students were eager to get involved when new members began rapidly — and consistently — showing up to events.

“Running Club is cool because we really all have diverse running backgrounds,” McPhaill said. “We have people you would never meet anywhere else because you’re from different majors. It’s fun seeing people come together, which I think is the goal of any club — people uniting around common interests that aren’t major-focused at all.”

Running Club hosts three optional events per week, but many members show up to at least two, McPhaill said. The club puts no pressure on people to run a certain distance or for a specific amount of time, McPhaill said, and that contributes to her intention to reframe some of the negative mindsets people have about running.

“Anybody can love running, it’s just that a lot of people haven’t done it correctly in terms of their frame of mind,” McPhaill said. “It’s always been like, ‘Oh, I did something wrong, let’s go run,’ or, ‘Let’s just go burn a lot of calories right now.’ So, there’s also intention behind running, and I think it’s about shifting the perspective for that too.”


As someone who ran cross country and track in high school, senior Rogan Rongley said he stopped running after coming to Pepperdine. He said getting involved in opportunities, such as studying abroad, distracted Rongley from the sport, and then the pandemic hit. When he decided to attend a Thursday night run at the start of his senior year, Rongley said he got into the habit of going every week.

“I saw testimonies for it [Running Club] on my Instagram, so I started to show up to see what it was like,” Rongley said. “[It] turns out I already knew a couple of the members, and I really enjoyed the community. Then, I heard they were training for a half-marathon, and I decided to join them in that.”

Rongley successfully completed the half-marathon in November 2021, and said Running Club not only offered physical help but also emotional support.

Many Running Club members have a history in athletics, McPhaill said, and she hopes to encourage them to hold onto their passion despite not running competitively.

First-year Cassidy Blaha said she participated in cross country and track throughout high school. Before starting college in the fall, Blaha said she looked into the opportunities Pepperdine offered to run for fun, which is how she found Running Club.

In addition to keeping healthy and having a set time in her schedule to run — something Blaha said is important during her busy first year — Running Club has helped her form a group of friends she otherwise would not have known.

“Runners are such like-minded people,” Blaha said. “It’s the same people and we’re always there running together, and you’re with each other for a long time. It’s just really nice and it has really helped me meet people.”

Blaha and McPhaill both participated in Campus Recreation’s PCT challenge with the Pepperdine Running Club’s team this semester. The challenge consists of weekly mileage tracking until one team runs 2485 miles — a distance equivalent to that of the Pacific Crest Trail in the Sierra Nevadas, according to the PCT website.

In spring 2021, McPhaill said the team competed apart from one another and won, but competing together was an entirely different experience. McPhaill said Running Club’s team won the PCT in March by covering the most mileage out of all participants.

As someone who enjoyed the bonding aspect of running with her friends, Blaha said the PCT only brought them closer and gave her more motivation to run.

“It was fun because every week we’d go do it running together and be like, ‘All right, make sure we’re recording for the PCT miles,’” Blaha said. “It was a fun thing to do as a team.”