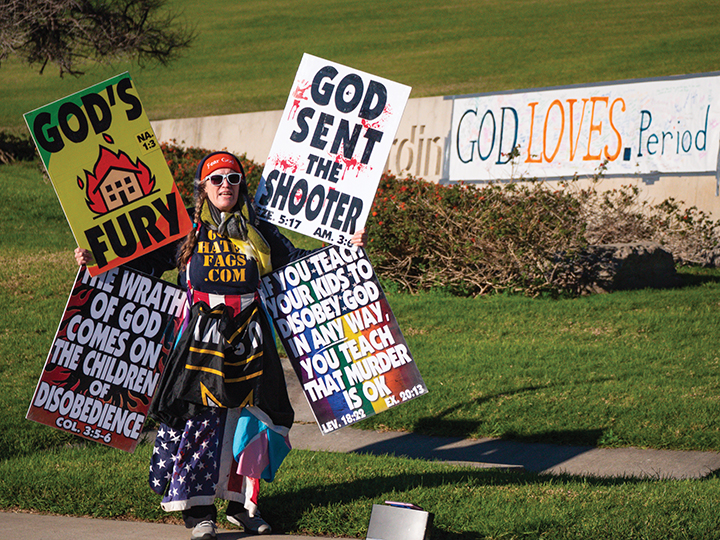 Editor’s Note: PGM is committed to not name the group of protestors. PGM’s decision to omit the group’s name from coverage so as not to give the group unwarranted publicity.

Four protestors from a church group picketed outside Pepperdine’s main entrance on Seaver Drive on Monday morning from 8 a.m. to 8:30 a.m. The demonstrators held up signs with slogans such as “God sent the shooter” and “Christians caused abortion by winking at divorce, remarriage & ‘gays'” while singing songs with anti-LGBTQ and anti-media themes.

Package by Emily Tencer that originally aired in the Feb. 12, 2019 edition of NewsWaves 32

University officials were aware of the group’s plan to protest outside campus and were in contact with local authorities to prepare for their arrival. The university stated in a press release Thursday that they stand firmly against “the group’s message and practices of hatred and hostility.”

There were no counter-protest efforts from Pepperdine students.

Parks said the protestors contacted the station and requested their presence along with the university.

“Our sole purpose of being here is really to protect their rights, as well as anybody else’s rights that wanted to be involved in this protest,” Parks said.

SGA and the Office of the Chaplain hung up three large banners that read “God LOVES. Period.” outside the entrance signs to the campus Monday morning. The posters were filled with signatures from community members who signed their names as a sign of solidarity against the protestors’ messages and beliefs about Pepperdine.

After Pepperdine administrators sent a press release Thursday to notify the community about the protest, students put up a display on the Freedom Wall Saturday that called for more support from the university for the LGBTQ+ community on campus – a group that the protestors are known for criticizing and speaking harshly against.

Monday morning, the display was covered over by papers that were arranged in the shape of a cross. The papers featured slogans such as “Promote love, not sin” and “Tolerance ≠ Love.”

Pepperdine Law School student Marisa Martin said she has heard about the group in the past through various media platforms and went to the protest Monday to hear why they believe what they believe.

“I know there are always two sides to every story so I just wanted to get their side and talk to them in general,” Martin said. “I just really wanted to […] converse with them to see if are they truly just like us or are they the type of people the media portrays them to be.”

After talking to one of the protestors, Martin said she believes they both came away “with a new experience.”

“[One of the demonstrators] was very powerful in what he believed in,” Martin said. “I personally don’t agree with all of the things, but he said it in a normal manner. He was very respectful to me.”

Juniors Nathan Heard and Noah Racey said they went to the protest because they wanted to see how the demonstrators would visually show their beliefs.

“I think it’s interesting to capture the mood and see for yourself the energy of people who are, you might say, this crazy, this hateful, this fanatic about something,” Racey said. “I didn’t want to give them any attention, didn’t want to be too loud about it, but I wanted to see what was going on for myself.”

Heard said he wore orange to the protest and around campus Monday to show unity with other community members against the group’s rhetoric.

“I think the university responded really well because they said it is better to not go and give them the attention, but if you do go, here are some ways to show solidarity like wearing orange,” Heard said.

SGA encouraged Pepperdine students and staff to wear orange Monday to “visibly stand in opposition to hatred” in an email from SGA President Austin Welch to the student body Friday.

“We wanted to stand in unity and in solidarity with our community because what a lot of what [the protestors] do is wear black to protest funerals for fallen veterans or soldiers, as well to these events,” Welch said. “We didn’t want to associate or be anything similar to them, so we decided blue and orange, we’re Pepperdine, so we’ll do orange because that stands out.”