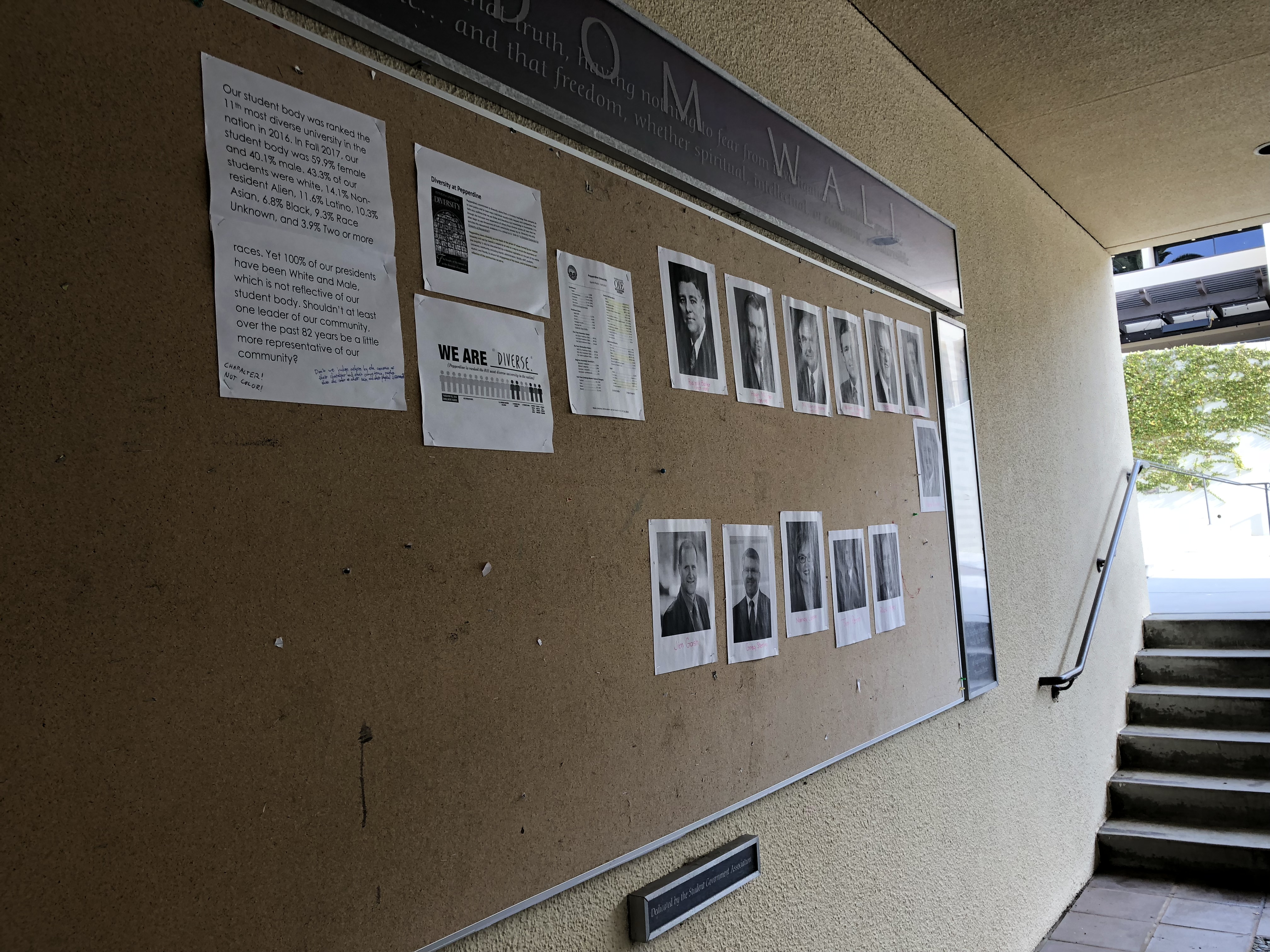 As Pepperdine awaits the upcoming announcement of the university’s 8th president, search committee members Marnie Mitze and Connie Horton are confident about their committee’s five chosen finalists, and what each individual will bring to the community. However, an anonymous display posted on Pepperdine’s Freedom Wall expressed that some students believe the candidate pool is lacking diversity.

“Yet, 100 percent of our presidents have been White and male, which is not reflective of our student body,” the display states. “Shouldn’t at least one leader of our community over the past 82 years be a little more representative of our community?”

The demonstration also notes that in 2016, Pepperdine was ranked the 11th most diverse university in the country and lists the 2017 demographics of the student body: 56.9 percent female, 40.1 percent male, 43.3 percent white, 14.1 percent Non-Resident Alien, 11.6 percent Latino, 10.3 percent Asian, 6.8 percent Black, 9.3 percent race unknown and 3.9 percent two or more races. These percentages can be confirmed on the Pepperdine’s Office of Institutional Effectiveness‘ website.

The display offers a call to action for the Pepperdine community to engage in civil dialogue about how much the faculty and administration are representative of the student body. However, not all students said they felt it was necessary given the specific qualities, skills and experience that is needed for this role.

“Race is not the ultimate factor in this decision because, when it comes down to it, whoever is the most qualified candidate is the one who deserves the job,” sophomore Justin Riorick said. “Qualities like experience and skills are more important in this circumstance because it it such a high-level position.”

Riorick said he is a supporter for diversity within his community and this campus. However, he also believes in having “an even playing field” for all candidates regardless of his or her skin color.

“This is a presidential position, so we should hire the person who is right to lead our school,” Riorick said. “It’s that simple.”

Vice President and Chief of Staff Marnie Mitze is a member of the search committee for Pepperdine’s 8th president. When asked about the consideration of diversity among the selection of finalists, Mitze said diversity is not the only factor the committee must consider for this position.

“We are always looking for diversity amongst all our pool of candidates,” Mitze said. “There are also certain requirements of the president like academic leadership and being an active member in Church of Christ.”

Pepperdine strives to continue increasing the diversity on campus, which has allowed the university to be able to recruit and welcome new students from all over the world each year, Mitze said.

“Faculty, on the other hand, they come and stay 25-to-30 years,” Mitze said. “The opportunity to replace and hire in more diverse faculty, for example, is much more restricted simply because of the lack of turnover.”

Mitze also noted that because of the small percentage of people in the world who hold a PhD, Pepperdine is competing with universities that hold much larger endowments and have the same mission of diversifying their faculty.

Only 1.5 percent of Americans have a professional degree among all races and both genders, according to the US Census Bureau 2017. The Bureau defines professional degrees as “degrees beyond a bachelor’s degree, including law (e.g. JD, LLB), medical (e.g. MD), veterinary (e.g. DVM) and dental degrees (e.g. DDS).”

“One of the biggest issues in lack of diversity is simply not just at Pepperdine, but everywhere, and we have to continue to work in developing new leaders and PhD candidates from under-represented backgrounds,” Mitze said.

What a Pepperdine President Must Embody

The role of president of Pepperdine University is different from that of the president at other universities.

“The next president must ‘get’ Pepperdine,” Connie Horton, vice president for Student Affairs and member of the Presidential Search Committee, wrote in an email.

Because of Pepperdine’s high standards and values, it is important that the next president lives up to the Christian mission and integrity that the university represents, Horton wrote. And Mitze agrees.

“This is a premiere position in that Pepperdine University is one of the only top rated universities in the country where there is both a strong commitment to academic excellence, as well as [being] unabashedly and unapologetically Christian,” Mitze said.

Students, such as sophomore Sara Smith, acknowledged President Benton’s efforts to engage with students and said they wished the new president would follow suit.

“I hope the new president will be on campus with us and show his face in the library every now and then, like President Benton did,” Smith said. “I feel like students appreciate getting to know the leaders of our school.”

Often referred to as “The Students’ President,” President Andrew Benton’s genuine concern and care for his students is a quality that both Mitze and Horton said they are looking for in the upcoming president.

“In my role as vice president for Student Affairs, I have appreciated how much President Benton genuinely cares so deeply about students,” Horton wrote. “He is supportive of the work of Student Affairs because he really wants students to experience community and to be physically, emotionally and spiritually supported.”

“I think he set the bar really high in that regard,” Mitze said.

But there’s one particular quality of President Benton that Mitze hopes the next president lives up to.

“I just hope they can play rock and roll guitar, but I am kind of doubtful about that one,” Mitze said. “And I don’t think that was one of the criteria we required in the position description.”

Being on the Search the Committee

While being the president is a tough job, choosing the right person to fulfill this position is not so easy either. However, both Horton and Mitze view the job as rewarding.

“I have greatly appreciated the opportunity to serve,” Horton wrote. “I have enjoyed getting to know the Board of Regents members who are on the committee and am so grateful for their dedicated service to Pepperdine. I’m glad they added the three of us non-Regent members (me, David Holmes and Cary Mitchell). I do think we have had something to contribute.”

For the first time in the history of Pepperdine, the search committee decided to add two faculty members and one administrator to their team. Mitze, a Regent member of the search committee, says the decision to include non-regent members on the committee has offered new insights into the presidential search. This decision also aligns itself with the university’s current journey of an overall remodeling after the events of November 2019.

“Things change; the way universities work, shared governance, and as Pepperdine evolves into a much more sophisticated and academically excellent institution, we move forward,” Mitze said. “If you don’t change, you don’t grow.”

How can students get involved?

As students continue to express their opinion on diversity matters among the five finalists, Horton said students did have the opportunity to get involved and still do.

“Students had an opportunity to complete the ‘pre’ survey, attend the Town Hall, the student interview session and the post-interview survey,” Horton wrote. “I hope many students will choose to do this with each of the on-campus candidates.”