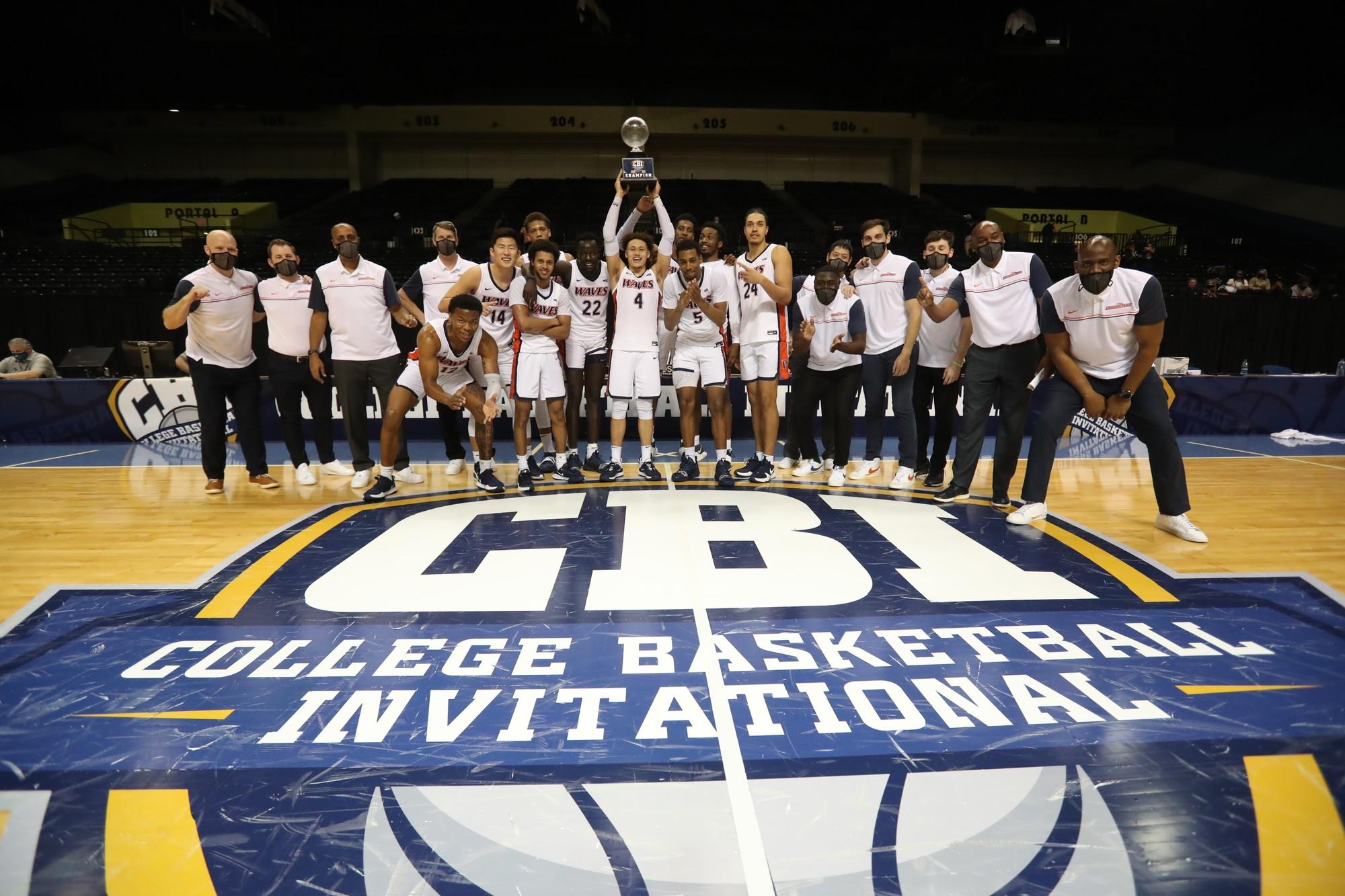 Pepperdine Men’s Basketball poses for a celebratory photo after defeating Coastal Carolina University, 84-61, in the College Basketball Invitation championship game March 24 at the Ocean Center in Daytona Beach, Fla. The Waves defeated the Longwood Lancers, 80-66, and the Bellarmine Knights, 81-72, to advance to the final.

Pepperdine Men’s Basketball coasted past the Coastal Carolina Chanticleers in convincing fashion in the College Basketball Invitational championship. In their third game in three days, the Waves displayed offensive efficiency and high-volume shooting to carry them to an 84-61 victory.

The victory vaulted the Waves to 15-12 on the season, and senior guard Colbey Ross, who exits Pepperdine as the program’s all-time leader in points and assists, got to end his collegiate career with a victory.

Junior forward Kessler Edwards said while the team’s performances weren’t perfect, they had confidence they were the best team in the tournament.

“Whenever we were down, Coach would always remind us that we didn’t come this far to lose,” Edwards said.

During the Waves stay in Daytona Beach, Florida for the adjusted eight-team tournament, Pepperdine was tested far more than their three double-digit victories indicate.

In their first-round game versus the Longwood Lancers from Farmville, Virginia on March 22, the Waves played catch-up for most of the first half. The Lancers started with an 8-0 run that Pepperdine quickly addressed with a 12-2 run of their own to take the lead 12-10. The teams traded shots and the lead for the rest of the half. A tough layup with three seconds remaining in the period by junior center Victor Ohia Obioha brought the score to 32-31 with the Lancers on top.

“I wouldn’t say we were worried,” Edwards said. “For whatever reason, we were slow to start the game. They were scoring baskets and making shots that we shouldn’t have allowed. We made sure to pick it up.”

The Waves shot 37% from the field in the first half and were five points below their average of 36 first half points this season. The second half was a different story, as Edwards and Ross scored 14 of the first 19 points to start the second half.

In the semifinal game versus Bellarmine, the Waves faced a tough test once again in the first half. The Knights shot efficiently in the first half, hitting 20 of their 31 shot attempts and 7 of their 13 3-pointers. Pepperdine was efficient as well, shooting 19-for-31 from the field. Despite the effort, they trailed 50-41 at the half.

“This was different than the first game,” Edwards said. “We knew we were messing up more. The defense had some serious lapses. Going into the second half, we knew we had to play the type of basketball that we know we can.”

Five minutes into the second half, Pepperdine rattled off 12 straight points to take the lead. Five minutes later, it was an entirely different ballgame, as Pepperdine orchestrated a 28-2 run that brought the lead to 75-60. They cruised to an 81-72 victory.

Head Coach Lorenzo Romar used the tournament to experiment with his lineup. Deng, who averaged 7.5 minutes per game this season, started all three games in place of sophomore forward Jan Zidek. Zidek, who averaged 14 points per game in the three games leading up to the CBI, injured his ankle in practice before the team left for Daytona Beach.

A pleasant surprise from the tournament was freshman forward Kendall Munson. He scored six points and secured five rebounds against Longwood, and followed the performance up with 13 points and 6 boards versus Bellarmine. Two of Munson’s biggest baskets were thunderous dunks in the second half that helped fuel the Pepperdine comeback against Bellarmine.

Munson said he was excited to showcase his skills in some of the biggest games of the year.

“I like to think of myself as a defense first guy,” Munson said. “I like the team aspect too, always making the extra pass and putting the team in good position. I think I was also able to showcase my high motor.”

Edwards said he was happy with what he saw from the young guys.

“Even though they’re not as experienced, they’ve still been through some adversity,” Edwards said. “Majok can shoot the lights out and Kendall is a monster for a freshman.”

The CBI championship game, which took place March 24, wasn’t a high-intensity, climactic finish that college basketball fans equate to the month of March. The Chanticleers came into the game headlined by DeVantè Jones, a top-20 scorer in the NCAA.

Jones picked up two fouls in less than seven minutes before Head Coach Cliff Ellis benched him to avoid the point guard committing a costly third.

Ellis opted to check Jones back into the game two minutes later, and a layup attempt by Smith for Pepperdine drew the third foul on Jones that changed the outlook of the game. Coastal was beating Pepperdine 16-15 when Jones returned to the bench. The Waves went on a 25-6 run to end the half with a score of 40-22.

The Chanticleers never found their footing in the second half. While it was more competitive, Coastal never brought the lead to less than 12 and Pepperdine outscored them 44-39 in the second half for a massive 84-61 win. Ohia Obioha had a big night, scoring a career high 16 points and notching 6 rebounds. Junior guard Darryl Polk Jr. had a career day as well, scoring 19 points with 5 steals.

By stat sheet standards, Ross had a modest final game for the Waves. He scored 15 points but facilitated the Pepperdine offense throughout, dishing seven assists. As a four-year starter, the championship marked his 53rd victory for the Waves.

“Man, it was the least we could do for him,” Edwards said. “He’s an all-time college basketball great. We’re one of the teams that ends their season on a win and I’m so glad we got to do that for him.”