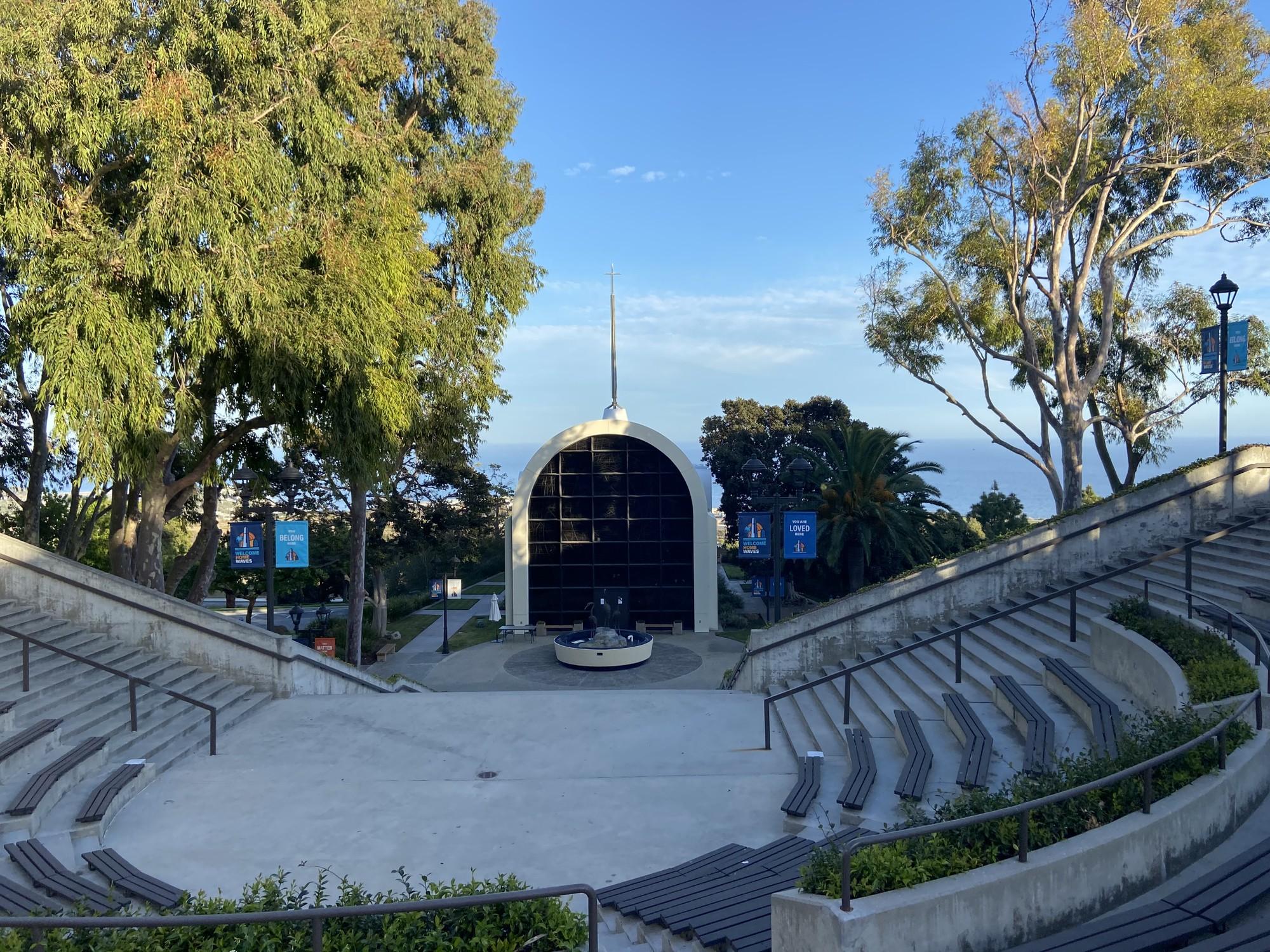 Pepperdine’s Stauffer Chapel sits empty April 7, 2021 after three semesters without events due to COVID-19. The Spiritual Life Office will undergo a reimagining Aug. 1 in preparation for the start of fall 2021. Photo Courtesy of Peyton Lee

After months of reimagining, President Jim Gash announced changes to the Chaplain’s Office including new titles for staff, an expansion of the office and new programming for students, in an email to the Pepperdine community May 3. The University will reveal more information regarding the Convocation program later this week, according to Gash’s email.

“It is with great excitement and anticipation that we share this vision for an enhanced spiritual life emphasis at Pepperdine as we seek to invest in our students as brilliant leaders of faith, character, courage and creativity,” Gash wrote in the email announcement.

Spiritual Life programming will be “reimagined” as the Hub for Spiritual Life, led by Chaplain Sara Barton and associate chaplains Lauren Begert and Rachel Collins, according to the email.

“The Hub for Spiritual Life is the framework of ministries overseen by the Spiritual Life Team that includes faculty, staff, and student-led ministries that will collaborate to create and sustain a vibrant and exciting worship and spiritual life culture at Pepperdine,” Gash wrote.

In an exclusive April 30 interview with the Graphic, Barton said one of the main ideas incorporated into the reinvention of spiritual life at Pepperdine was collaboration.

“The word ‘hub’ we hope will communicate to people that we collaborate,” Barton said. “We recognize and celebrate that we do not provide the whole spiritual experience but are part of a greater whole […] we seek to connect our community and to be connectors.”

The vision for the Hub also seeks to be more inclusive of all kinds of spiritual life.

“We recognize that every person at Pepperdine doesn’t come from the same faith tradition or worship in the same way and so I think we have a priority and a goal to work with our community to cultivate worship services that honor and really bless our diverse community,” Barton said.

The timing for the reimagining hinged on several factors, Barton said. First, Gash has prioritized Spiritual Life initiatives in his three presidential pillars of Faith, Footsteps and Fundraising.

A second factor was community feedback including student survey data and focus groups which directed staff to look into changes as well. Collins mentioned the National College Health Assessment as one example in addition to faculty feedback from club convocation leaders and mentors.

“Those came into being together in a way that caused this to be a good time to make some changes,” Barton said.

Another aspect of spiritual life revision was the pandemic, Barton said, as it provided staff time away from students to plan and restructure in ways they weren’t able to before.

“The pandemic is a challenge, but it’s also an opportunity,” Barton said. “Just like we see in many aspects of life, people have met challenges during this pandemic, but we’ve also been able to pivot and adjust in exciting ways as we look toward the future.”

Changes with the reimagining include an expansion of staff — including student employees — such as a new worship chaplain position. Additional staff will be on-boarded over the summer, according to Gash’s email.

The Spiritual Life team also hopes to build upon beloved Pepperdine traditions, Barton said. While students can expect new, innovative ideas from the Spiritual Life office in the coming year, Barton and Collins affirmed central aspects of the office — like spiritual mentorship, worship, prayer and student leadership — will not change.

Under the reimagining, Barton will also assume the role of associate vice president of Spiritual Life on Aug. 1, transitioning her from Student Affairs to the President’s Office, but said this doesn’t mean she’s not focused on serving students.

Collins will assume the title of associate chaplain Aug. 1, which will put her in a larger role of connecting ministries inside the Spiritual Life office, she said.

“Being able to create as many spaces as we can for students and our community to engage in spiritual life is what excites me,” Collins said. “I’m excited for this announcement and what it means for being able to create those kinds of spaces.”