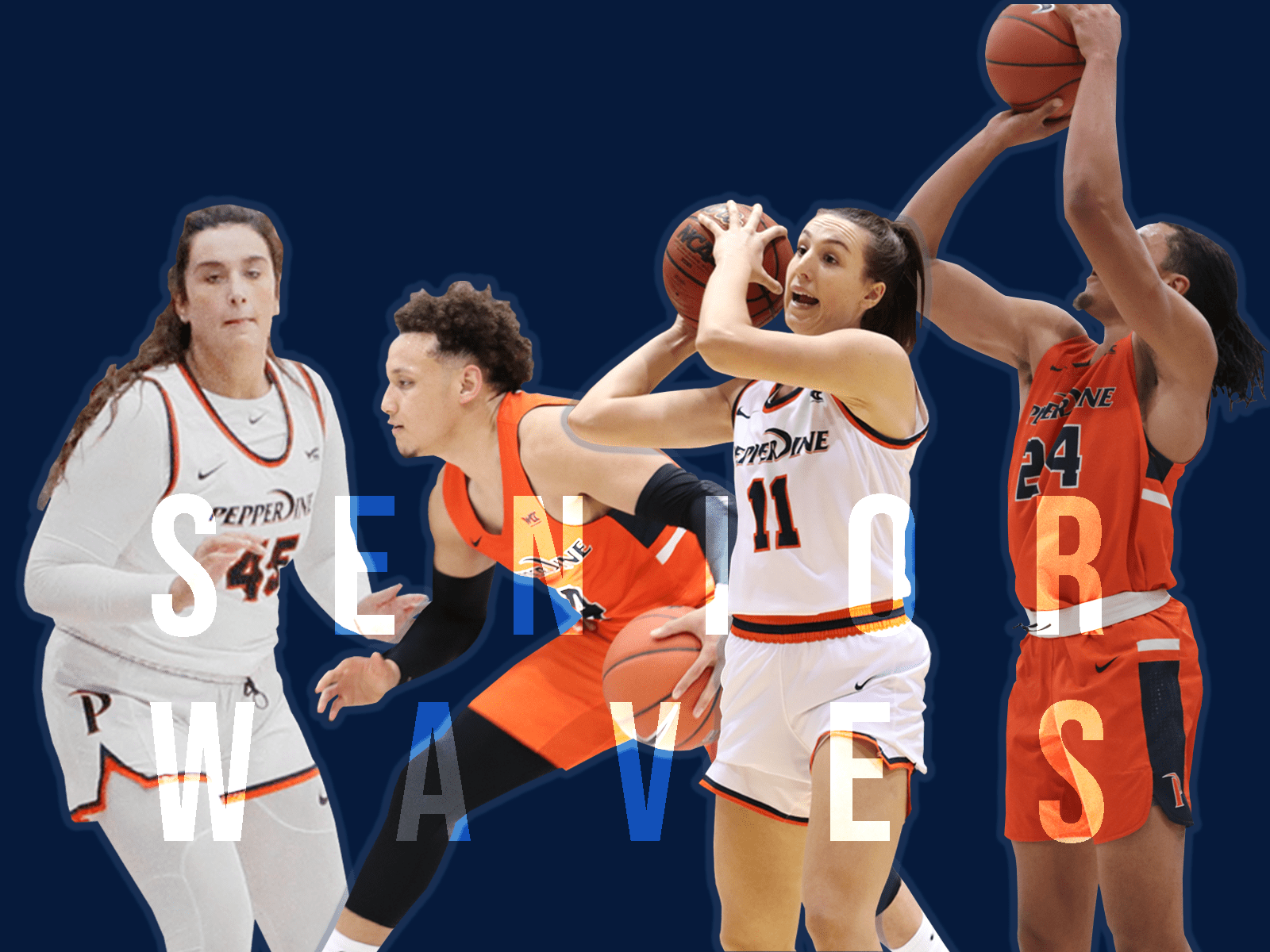 The Pepperdine Men’s and Women’s basketball teams closed out the regular season at Firestone Fieldhouse last week, as both teams now gear up for the WCC Tournament in Las Vegas, Nev., beginning Thursday, March 4.

Before the end of their regular season, both teams held Senior Day during the Waves‘ last home games at Firestone Fieldhouse. The men lost to LMU on Feb. 25, 81-74, and the women were victorious against Saint Mary’s on Feb. 26, by a score of 62-42.

Senior Day is usually celebrated with friends and family cheering and congratulating the senior Waves, but due to COVID-19, no spectators could attend.

Men’s Head Coach Lorenzo Romar said that despite the circumstances, it was still a memorable day for the seniors.

“I think our people did a great job of trying to create a normal atmosphere with clips from the families wishing our seniors well,” Romar said. “But at the same time, I feel bad for those guys.”

Ross has been an integral part of the men’s team since his freshman year and solidified himself as one of the greatest players in Pepperdine and WCC history.

In his last home game, Ross moved into 7th place on the WCC’s all-time scoring list with 2,131 points and collected his 800th career assist. He is one of three players in NCAA Division I history to accumulate 2,100 points, 800 assists and 400 rebounds.

“Colbey Ross has accomplished so much during his time here and he has broken almost every record,” Romar said. “He wants to be the best and he is a no nonsense guy. His work ethic and intensity makes him a great lead for our team to follow.”

Ross said while his senior night was not what he expected, it was still memorable.

“It was definitely emotional because no fans or any of my family were there and I always thought my senior night was going to be legendary,” Ross said. “It still made me happy because I got to spend time with my teammates and see my family on the big screen wishing me luck in our game that day.”

The men’s team is seeded third in the WCC Tournament and will play its first game March 6, in Las Vegas, Nev.

“We won our last game [against San Diego on Feb. 27] which is good for our confidence headed into Vegas,” Romar said. “Like all the other teams, we have a few days to prepare and work on our deficiencies, and we feel strong and optimistic that we can go on the court and compete well.”

Ross said the dynamic of the team is good and the team is in a good place mentally and physically.

“Everyone understands what is at stake and the guys are all in a good headspace,” Ross said. “We have three tough games, but it is three games that if we compete well and make good decisions then we will have a chance.”

The women’s team gifted their seniors a win in their last home game at Firestone on Feb. 26.

Like the men’s team, the women’s team recognized four seniors: forward Monique Andriuolo, forward Hayley Duran, center Tara Dursham and guard Mia Satie, who opted out of the season due to COVID-19.

Head Coach Kristen Dowling wrote in an email to the Graphic that the pre-game ceremony was a blessing for the seniors.

“Considering the circumstances, we are grateful to be able to honor our seniors with senior day,” Dowling wrote. “The experience was different as families were unable to join, but we were able to share a video from each of them.”

Andriuolo said the experience was bittersweet, but she was happy to still have a senior day.

“It was obviously different not having people around like my family,” Andriuolo said. “My team was here and they are basically my family since we spend so much time together and we are all we have right now.”

Dowling commended the seniors for their leadership during a challenging season.

Even though her senior year did not go as planned, Andriuolo said she was grateful for the time she spent at Pepperdine.

“The atmosphere and the people around me are what I am going to miss the most,” Andriuolo said. “I’ve found a home here and I will definitely miss it when I leave.”

The women’s team plays its first game in the WCC tournament on Thursday and are seeded ninth out of nine, with The University of San Diego not competing due to positive COVID-19 tests. The Waves will be looking to match their performance last year, when they went on a run to the semifinals.

“We expect to win some games as we are playing our best basketball at the end of the year,” Dowling wrote. “We are focused on one game at a time and hope to win our first game on Thursday.”

Andriuolo is confident the team can play well entering the postseason.

“We are feeling confident looking at our schedule because the games we played were against teams we were competitive with early in the season,” Andriuolo said. “We have momentum from our victories against them and feel we can play at their level.”