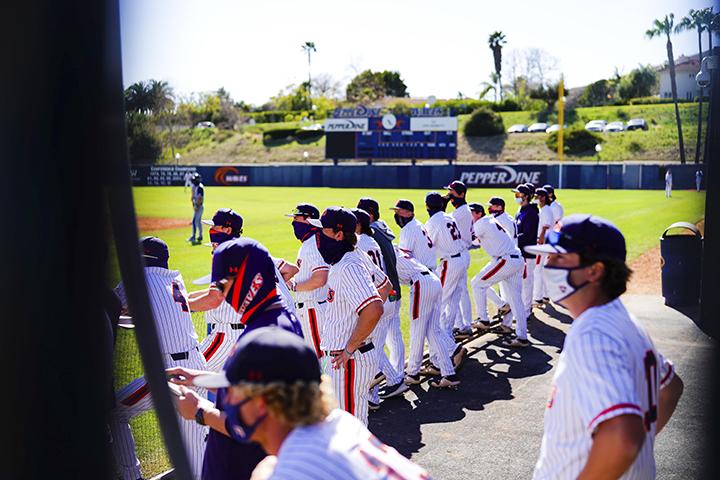 The Pepperdine dugout watches during game two against CBU on Feb. 20. This was Pepperdine’s first victory on Eddy D. Field Stadium since March 7.

Pepperdine Baseball came into the season with high expectations: It ended the year at No. 16 in the country, returning 31 of 35 players from the 2020 roster and adding a 12-man freshmen class.

In the opening series against California Baptist University — 349 days since beating Michigan in the last game of 2020 before the COVID-19 sports shutdown — Pepperdine had bright moments but was outmatched in nearly every facet of the game, starting the season with a 1-2 record.

Hinkel settled in shortly after and gave up one more hit and zero runs while adding his first two collegiate strikeouts. He was replaced in the top of the fifth inning by senior right-hander Dane Morrow.

Morrow struggled, giving up one run in the bottom of the sixth before getting out of the inning down 2-0. Pepperdine got on the board in the top of the seventh to make the score 2-1 off a groundout from freshman second basemen John Peck who scored fifth-year senior right fielder Reese Alexiades. Alexiades was the only player in the first five of the Pepperdine lineup to secure a base hit.

In the bottom of the seventh, Morrow gave up a base hit and walked another before sixth-year senior right-hander Michael Mahony replaced him. The veteran couldn’t undo the damage as both runners scored, making the score 4-1 before a strikeout, flyout and groundout.

After a hitless inning for Pepperdine in the top of the eighth, the floodgates opened in CBU’s final two innings at-bat as they rattled off five unanswered runs at the expense of freshman and junior right-handers Dylan Schwartz and Tyler Murrah. The Lancers took game one 9-1.

“There wasn’t any energy,” senior first baseman Justin Lutes said. “We came in thinking we could get an easy win and we got humbled by it. We got to the bus and knew we had to just hit the restart button.”

In game two Saturday at Eddy D. Field Stadium in Malibu, the Pepperdine bats came out with a fire that was nonexistent the previous day. After a hitless first inning from each team, Lutes crushed a solo home run over the left field wall immediately followed by another solo shot from sophomore utility player Ryan Johnson.

“He threw some good pitches at me,” Lutes said. “I had to sit on the slider he was throwing either soft and away or hard and in. I just had to find my approach and stick with the line drive. I got under it and found its way over.”

Groen said he changed his mindset this offseason before earning the Saturday starting spot for the Waves.

“This year, I realize my job is going to be to keep my team in every game and to put them in a better spot than we were last year,” Groen said. “Here the culture is to be competitive and test each other every day and to be better than we were the day before. The bats clicked today and everything else came together.”

CBU was scoreless until tying the game 2-2 in the top of the fifth. The Pepperdine lineup quickly responded and rattled off six runs in the bottom of the fifth from graduate senior third basemen Aharon Modlin, who was hit by a pitch with loaded bases followed by a walk from Lutes. Alexiades singled through the right side before Johnson was walked with the bases loaded. Freshman outfielder Connor Bradshaw singled to left center to score Lutes and Peck hit a sacrifice fly that scored Alexiades to make it 8-2, a 6 run inning from the Waves.

In the bottom of the sixth the bats were still hot as Modlin doubled down the left field line and scored junior shortstop Wyatt Young. Lutes brought Modlin home off another double to make it 10-2.

The Lancers answered with 3 runs in the seventh and 1 in the ninth to bring the score to 10-6. Junior right-hander Jack Baird closed the game before it got too close.

Hirtensteiner, in his 23rd season, said he was happy with his team’s performance.

“Well, we swung the bat better,” Hirtensteiner said, laughing. “We put a little more pressure on them. The two homers early were good and we eventually got their starter out. We never let them get comfortable.”

Hirtensteiner said that keys for the rubber match in Riverside were to throw more strikes out of the bullpen and not help the opposition by giving up any back-to-back walks.

Junior right-hander Trevor Kniskern started game three but didn’t play up to his 3.91 career ERA standard. In 2.2/3 innings, he gave up four hits, three walks, three runs and a three-run home run from junior outfielder Ulises Caballero to make it 3-0 in the second inning.

CBU limited Pepperdine to three hits for the rest of the game and the Waves failed to manufacture another run. The Lancers won game three 6-2 and the series two to one.

Pepperdine’s next game will be back in Malibu on Friday against the University of California, Santa Barbara.