What former mayor of Fort Lee, N.J., Burt Ross wants people to take away from his talk at Payson Library on Feb. 6 is a clearer understanding of the different moral choices life delivers.

Most of those choices in life probably won’t involve a New Jersey mafioso’s half-a-million-dollar bribe or death threats.

The 1976 New York Magazine cover story excerpted from “The Bribe,” a book based on Ross’s experience with the Mafia. Courtesy of Burt Ross.

Elected at 28, Ross became the youngest mayor of a large town at the time. He would also later become the only known public figure at the time to suggest wearing a wire for the FBI. In 1974, the mayor was bribed by the Mafia for $500,000, went undercover and later testified in a federal court that sent members of organized crime to prison.

His talk will be based on the book “The Bribe,” published by Harper and Row, of which Payson holds two copies.

“I think for a school where there’s an emphasis on spiritual and not on material, this is a very consistent message,” Ross said at his home in Malibu last week. “Clearly if you turn down a half-a-million bribe, you’re saying money isn’t everything.”

Ironically, Ross is known for two things: turning down money and losing money.

Ross lost $5 million to Bernie Madoff, the Ponzi schemer who committed an estimated $50 billion in fraud. In 2009, Ross spoke at Madoff’s sentencing, where he referenced “The Divine Comedy” by Dante, who recognized fraud as the worst of sins.

Years later, Ross likened Madoff and the bribe to another public example of cheating: Lance Armstrong.

“Here was somebody who made a conscious choice that it was important enough for him to win at all costs, and people now can view the consequences,” Ross said. “It’s a little bit Faustian. When [the Mobster] gave me the $100,000 in small bills, he said, ‘This is just the beginning.’ And I think there’s really a moral there — you are selling your soul. It’s not a one-time thing.”

Ross thinks different people will come away from his story with different lessons. He doesn’t expect to impart some newfound moral certainty.

“Every single person has these kind of choices on some level,” Ross said.

Instead, he hopes to draw a connection to two classes he has audited, taught by professors Tom Shadyac and Graziadio’s Dennis Torres, which teach “that there are values that for many of us are far more important than the almighty dollar.” 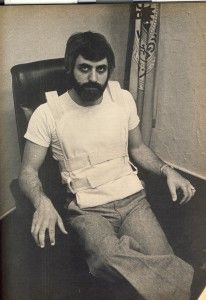 On Wednesday, however, Ross’s talk will be limited to the bribe. But he said he won’t mind answering Madoff questions afterward.

His talk will be held in the Surfboard Room at 7:30 p.m. As his elementary school teacher once advised for any speech, Ross will keep the talk “like a woman’s skirt: short enough to be interesting and long enough to cover the subject.”

Ross’s style is part Larry David — minus the neurosis — and part Hesh from “The Sopranos” — minus the family. His self-deprecating humor and cool attitude are something only New Jersey can breed.

Ross’s life, however, was hardly a Martin Scorsese film.

He went to a Quaker boarding school in Pennsylvania, graduated from Harvard and earned his Juris Doctorate degree from NYU Law School. He was Ted Kennedy’s first summer intern and president of the Harvard Radcliffe Young Democratic Club, where he hosted Dr. Martin Luther King, Jr. in 1965.

This month, Ross and his wife Joan celebrated their first anniversary of living in Malibu. Since the move from New Jersey, or “the old country,” Ross has enjoyed a smooth transition filled with discoveries like scorpions, surfing and avocados. The almost 70 year old is today more commonly known as Malibu Patch’s resident humor columnist. His weekly columns, published on Tuesdays, have not only been a welcome mat from the community, but also an emotional outlet that he could project through humor.

Though Ross joked that he can’t hand out free bikes in exchange for attendance, he will serve free dessert and a good laugh.

“I like to think that occasionally students can do something where they don’t have to be bribed.”

Nothing like a good ol' boob grab at a fan meet and greet to start off 2013 with a bang. Uh…what?!?! Yeah, you read that...
Copyright 2013 Jupiter Premium Magazine Theme
Back to top