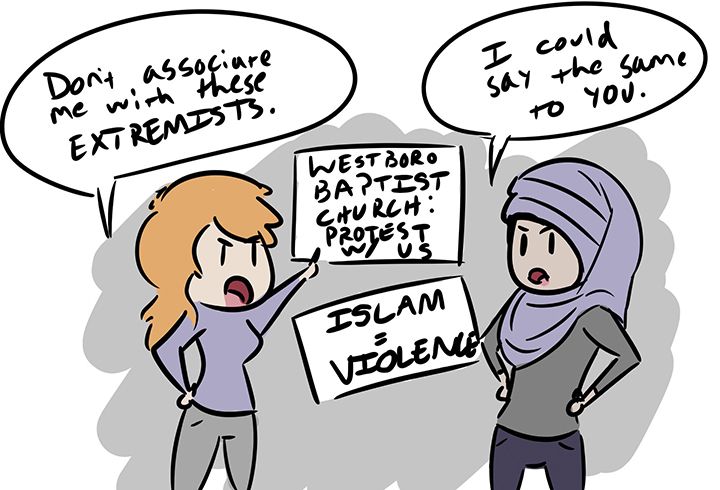 Editor’s note: Read the second part of this piece in next week’s issue, which will be published Nov. 13.

As a Christian, I am appalled at the horrendous persecution of my brothers and sisters by the Islamic State of Iraq and Levant (aka IS) as well as the brutal genocide of minorities and the horrific abuse of women and children. As a friend of several individuals who practice Islam and assert that peace is the true message of their faith, I am very disheartened by the U.S. media’s one-sided portrayal of Islam.

IS, a self-proclaimed Sunni-affiliated Jihadist group, is dedicated to religious violence and to the eventual eradication of Westerners, Christians, Muslims of other sects and anyone who dares to disagree with them. However, there are many followers of Islam (Sunni and Shia) who renounce the behaviors of IS and refer to them as heretics of the faith as well as enemies of humanity.

In a video titled “UK IMAMS AGAINST ISIS” published July 11 by Imams Online, British Imams from both Sunni and Shia sects express their extreme disapproval of IS and their practice of Islam.

Imams in the U.K. are not the only ones opposing IS. According to a globalresearch.ca article, “Muslim Leaders Worldwide Condemn ISIS,” published Aug. 24, prominent leaders in the global Muslim world are denouncing and condemning IS.

In an article published on Aug. 19 by Middle East Online, Saudi Arabian Grand Mufti Sheikh Abdul Aziz al-Sheikh said, “Extremist and militant ideas and terrorism, which spread decay on earth, destroying human civilization, are not in any way part of Islam, but are enemy number one of Islam, and Muslims are their first victims.”

In conversations with my Muslim friends and friends with Muslim backgrounds, I have come to recognize that although an especially vocal group such as IS may claim to be a particular religion, it does not mean that they truly represent that religion. Just as many Christians would claim that the Crusades, the Ku Klux Klan and other horrible groups formed under the guise of Christianity were not actually affiliated with true Christian beliefs.

The Origin of Terrorists

The prominent view of terrorism is that its proponents are nurtured toward those tendencies by their belief system. Therefore, the commonly made assumption is that groups such as al-Qaida and the Islamic State are products of their proclaimed Muslim faith. The problem with this perception is that it is laying a claim upon the Muslim population as a whole when the group at fault is not representative of the entire community.

“The Muslim community’s main concern is that IS is a group of extremists. Extremism is not a phenomenon new to Islam; there have been extremist practitioners since the time of the prophet. While groups such as IS believe that they are correctly practicing Islam, most Muslims would disagree,” according to senior Aljoharah Alshaikh from Saudi Arabia.

My Muslim friends said that while the true practice of Islam is not the cause of terrorism, its presence does come with the territory.

“This group’s existence is not a surprise,” Alshaikh said. “This ideology of extremism has existed for thousands of years. While IS is certainly a threat to Islam, it is also a political threat that is destabilizing Arab nations.”

Freshman Jilani Ghafur said, “It is a war-torn region. Extreme conditions create extremists.” Ghafur’s family converted to Islam after his grandparents immigrated to the U.S. from Central America.

Muslims also believe that these terrorist groups have been predicted since the beginning. “There is a verse from the Hadith — our book of the sayings of the Prophet Mohammed — that exactly describes IS,” Alshaikh said. “The saying goes: ‘Verily there would arise from my Ummah after me or soon after me a group [of people] who would recite the Qur’an, but it would not go beyond their throats, and they would pass clean through their religion just as the arrow passes through the prey, and they would never come back to it. They would be the worst among the creation and the creatures.’”

The assumption that terrorism is the primary function of the Islamic faith is inaccurate. Alshaikh questions the intentions of IS militants.

“I think the members of IS have been brainwashed. Some of them think they are representatives of Islam, but most of these extremists are illiterate and haven’t even read the scriptures for themselves,” Alshaikh said, “Their ideology is not even a misinterpretation of Islam; they’re following a leader who has brainwashed them and taken the Qur’an out of context.”

Islam vs. the Islamic State

Islam is not solely a militant religion. Ever since Sept. 11, 2001, Western culture has developed a view of Arab culture and Islam as a predominantly hostile, anti-American group. The Islamic State has only furthered these inaccurate assumptions that affect the peaceful Muslim majority simply because they are less vocal and less public in their faith, and get less media attention in the U.S.

Senior Safeena Padder’s family originates from Kashmir and Pakistan — located to the northwest of India. “I was raised by very conservative and very religious Ahmadi Muslim parents,” she said. “I am not even Muslim, but having grown up in the faith, I have a deep gratitude and awareness for the peace and intellect that Islam values that simply does not line up with IS ideologies.”

As a Christian, Padder shared her belief that where there is capacity for great love, there is also capacity for great hate. Padder explained how the slightest step in the direction of hate can carry that person or the entire religious group into perversion of the original intent.

“Islam is a beautiful religion. I have born witness to so much Islamic love, care and compassion for Muslims and non-Muslims alike,” Padder said. “The truth of it, though, is that the same thing that planted the seed for a beautiful Islamic movement like Ahmadiyya, also planted the seed for al-Qaida, IS and other terror organizations. However, while one group sees Islam as a great opportunity to love and glorify God, the other sees it as a great opportunity to gain power and glorify themselves in the name of God.”

IS has perverted the Muslim faith in how they treat the people of their own religion as well as Christians and other minority religions.

“It is not Islam as a religion that is persecuting masses of people because it is Muslims too that are being persecuted,” Padder said. “A religion does not root itself against its own people — a political, terrorist organization does.”

The disunity among Muslims, though nothing new, is pulling the threadbare fabric of the Middle East into smaller and smaller pieces. “It’s really brothers killing brothers,” Ghafur said. “Muslims are supposed to be united, yet we’ve let ourselves succumb to useless violence and hatred. We are divided and in danger of becoming conquered. The Middle East is falling apart.”