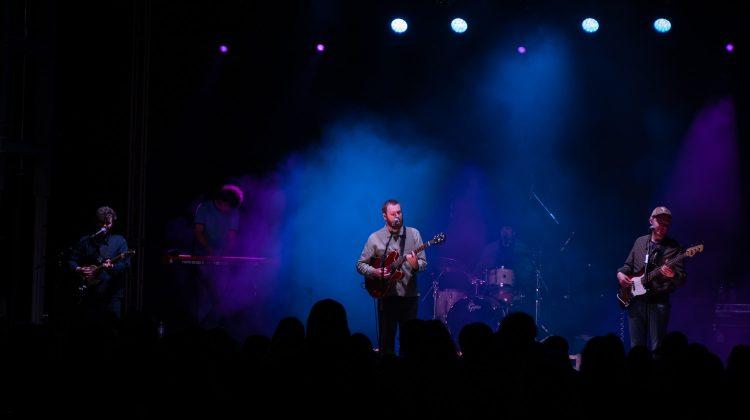 The Nashville-based band The Brook & The Bluff perform a concert for students at Alumni Park. The band sang soulful indie music as the crowd swayed to the beat. Photo by Lucian Himes

An archway of colorful balloons, a row of food trucks and a lit-up ferris wheel on Alumni Park welcomed students to the 2022 Pacific Sounds Music and Arts Festival.

After a week of events and activities leading up to the festival, the Student Programming Board brought joy and community to campus on the night of March 25, Board Event Planner and senior Zoë Walsh said. With three performers — Olivia Knox, Hope Tala and The Brook & The Bluff — and a truck displaying student art, PSMA celebrated the arts and their ability to bring people together in a way Walsh said nothing else can.

“When looking at the same artwork, for example, there’s a connection there that goes beyond language,” Walsh said. “When listening to the same song, again there’s this sub-linguistic connection that can be so meaningful and powerful without having to put words to it. It can create community in such a visceral, sensory way.”

Walsh said because few students experienced the past in-person PSMA event in 2019, she wanted to revive all the best parts of it — and make it even better.

“It was the best day of my freshman year, so I’m so excited to bring it back,” Walsh said.

Rather than the standard two performers, Walsh said the Board hired three to showcase a variety of music and give opportunities for up-and-coming artists.

“We focused on diverse sounds, popularity at Pepperdine, ‘dance-ibility’ — because I love dancing,” Walsh said. “We wanted something that, even if you didn’t know the songs well enough to sing along to them, you could dance along.”

The night kicked off with Knox, an 18-year-old pop singer and songwriter studying music at Azusa Pacific University. Knox said until PSMA at Pepperdine, she had not performed since 2020, so she was excited to debut her new feel-good music.

“Only one of these songs are out — the rest of them I have written over the past six months since I moved to LA,” Knox said. “I am excited because these songs have been sitting in my phone for so long.”

As a student herself, Knox said the energy of an audience of students is unlike any other crowd because students can relate to her lyrics in a special way.

“I just think this is amazing because I’m the same age,” Knox said. “That is fun for me because I get to perform in front of an audience that hopefully appreciates it.”

Knox said her music is full of positive affirmations and messages of self-love — two things she said everyone — especially college students — need to hear more of.

Following Knox was Hope Tala, a 24-year-old British R&B singer. Tala sang as the sun set and students gathered at the front of the stage to listen to her indie soul music, waving their hands in the air, clapping and humming to the beat.

As the weather cooled off and the lights shined brighter against the dark sky, first-year Viviana Hernandez said PSMA was the perfect way to close out her first year at Pepperdine. Hernandez said it brought the community together to bond over things everyone loves.

“There’s free food, an awesome ocean view, a ferris wheel and music and I get to spend time with my great friends,” Hernandez said. “It’s one of the coolest things I’ve ever been to, especially for free, and the music is amazing.”

The closing act was southern indie band The Brook & The Bluff. The Nashville-based band drew the crowd to their feet in Alumni Park as they danced and listened to the soulful music.

With the strum of the guitars, students in the crowd jumped and sang along to the band’s southern-indie style music.

Sophomore Whitney Powell said she felt she missed out on a lot spending her first-year at Pepperdine virtually. Events like PSMA help her make up for lost time, she said.

“I think it’s so creative, and I really feel like I’m embracing living in California because I couldn’t do this anywhere else,” Powell said.

In addition to performers was the Pepperdine Student Art Gallery truck that traveled from Upper Dorm Road to Alumni Park throughout the week, Walsh said. The truck drew attention to the Saturday night festival and symbolized the road back to normalcy.

Hernandez said the music made her feel joy and gratitude for the little moments she often takes for granted at Pepperdine. The concert, she said, brought her together with friends, and also introduced her to new artists she will listen to in the future.

“When I imagined coming to Pepperdine when I was applying, this is exactly what I imagined,” Hernandez said.