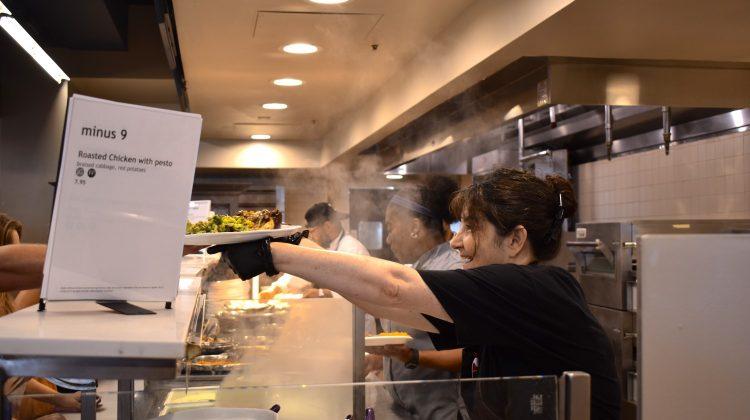 Roxann Holloway smiles as she hands a student a fresh plate of roasted chicken dinner. Holloway has been on staff with Bon Appètit since the first week of August. Photo by Mary Elisabeth

Whether grabbing a delicious meal or just a quick snack, some students interact with the cafeteria workers on a daily basis. Whether returning staff or new, the people who make and serve meals have unique stories to tell.

The Bon Appètit Management Company replaced the previous dining service, Sodexo, in the 2022-23 academic year. Bon Appètit is based in Palo Alto, Calif., and operates over 1,000 cafés in 33 states, according to their website.

With the arrival of Bon Appètit came a handful of new workers for students to get to know.

“At Pepperdine, you meet a lot of people, a lot of nice people,” said Rama Kingston, cashier supervisor in training. “It’s a great opportunity to just get to know people.”

Outside of working for Pepperdine dining, Kingston said he owned and operated his own business for five years.

“I had an agency where I did web design and convenience-based services and digital marketing,” Kingston said. “That became annoying to deal with, so I transitioned to paid advertising in an effort to make my problems less for my business and get more passive revenue.”

Kingston said he spent time traveling through India on a spiritual quest in 2019 and traveled to Panama to provide medical aid to the indigenous people through a non-profit organization his cousin owns.

When he is off the clock, Angel Rivera, Front of House supervisor, said he enjoys building computers with his friends.

“I love how everyone sees it as super complex and difficult, but once you get into it, it’s super simple, and it becomes really fun,” Rivera said.

Rivera started with Bon Appetit at the beginning of the school year but already said he loves the Malibu location.

“I love it out here,” Rivera said. “I love being able to see the ocean from my workplace — just gorgeous.”

Before taking the job, Rivera spent a month in the summer in Oklahoma visiting and connecting with people in his family whom he had not met before.

Rivera said he loves talking and getting to know new people while working at Pepperdine. He said he believes how he interacts with others makes him who he is.

“I love meeting people,” Rivera said. “I love talking to people. I think that one of the biggest things about who I am is the people that I come in contact with.”

Between her shifts at the HAWC or the Lighthouse, Ava Stanford is a first-year at Santa Monica Community College pursuing a degree in Fashion Design.

“I think I’m so interested in fashion because every piece that someone wears, you know it’s coming from what they think is cool, and it just gives them their individuality,” Stanford said.

Stanford said she has already experimented with a sewing machine she got for Christmas. She decided to start by making a pair of “stacked jeans.”

“I went to Walmart and got two pairs of black skinny Jeans,” Stanford said. “I sewed the bottoms together and made them.”

Cashier floater Roxann Holloway can be found helping out around the Waves Café or playing with her heavy metal band on the Sunset Strip. She has been a part of many bands including Sun Goddess and Band Revival.

“I’ve been in love with music since I was a kid,” Holloway said. “My first song I wrote was when I was 7 years old.”

Holloway said she believes the love of music is not something that you can choose for yourself.

“I think music kinda chooses you, and once it’s in your heart, you can’t give it up,” Holloway said.

Line cook Surya Jain said his love for cooking has been an important part of his life since he was young. Jain transitioned to Pepperdine from an Italian restaurant in Santa Monica called Orto, but is now making pizzas at Oasis.

“I’ve always been interested in cooking since I was a little kid, and my dad taught me how to make scrambled eggs,” Jain said.

Jain said he has aspirations of opening up his own restaurant after learning all he can from working in the Pepperdine kitchen.

“I feel like I need to learn everything there is to know about cooking first,” Jain said.

Jain said he believes the spirit and unity of the team at Pepperdine sets it apart from jobs he has held in the past.

“Everyone’s been super cool and super chill which is nice,” Jain said. “I appreciate everyone’s just being a team.”