Opinion: The Graphic Must Take Responsibility For Educating Its Readers 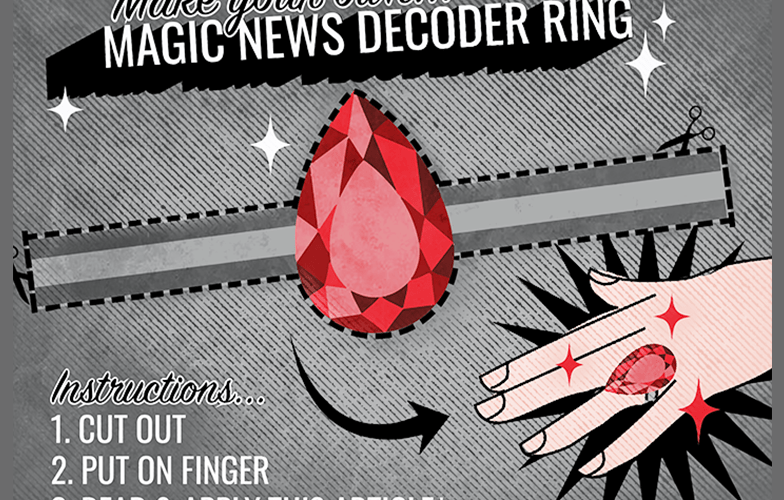 News literacy: a concept that requires readers to be somewhat news literate to understand in the first place. It seems to be the ever-present punchline to the frustrating joke of why the news audience doesn’t care to learn about the intricacies of the news cycle.

As an organization, the Graphic has begun to place a good deal of emphasis on news literacy, but what does that mean? How does it succeed? How does it fall short? The best way to analyze all of these questions is to start at the beginning.

News Literacy Project defines news literacy as “the ability to determine the credibility of news and other content, to identify different types of information, and to use the standards of authoritative, fact-based journalism to determine what to trust, share and act on.” In an age of increasing claims of “fake news” and the like, this seems to present a challenge to the reader to determine what is real for themselves.

Yet, there is an intrinsic problem with putting the onus of discernment solely on the reader. With no clear incentive to educate themselves on complicated journalism ethics, in order to read a simple news article, readers may skip the step and just trust their assumptions — a practice that seldom ends well.

While there are organizations like News Literacy Project that help empower the individual to educate themselves, there is also value in taking ownership as a news agency to provide that education to readers.

The Graphic has decided to take the latter approach.

With behind-the-scenes blurbs in the Pixel, an intense focus on fact-checking and diversity of sources, and editors’ notes to add clarity, the Graphic truly tries to go above and beyond to be news literate. But even with all that, there are still improvements to be made — both internally and externally — to better promote news literacy.

At the Graphic, it seems like the News team is always on the search for the next great story or development on the Pepperdine campus and beyond.

Yet, with this vast network of stories, there is considerable work to be done to verify all the details. To ensure all information is properly reviewed, junior News Editor Ashley Mowreader said a collective effort to fact-check is fundamental.

“It really does come to a lot of trust in my News team and affirming in them news values and making sure that they’re fact-checking things as they can,” Mowreader said.

Mowreader acknowledges that beyond this effort, there are ways in which the Graphic can improve its relationship with news literacy and its readers.

“I think, in some ways, we assume a lot of our readers,” Mowreader said. “There’s some things about a newspaper that the general person doesn’t understand […] One thing that I would like us to do is just to really get back into the community. Whether that’s through surveys or focus groups or interviews, just sort of asking, ‘What do you want to know more about us?'”

Housed midway through the physical paper, the Life & Arts section seeks to share the heart of the Pepperdine campus, so to speak, sophomore Life & Arts Editor Sofia Longo said.

“Life & Arts really goes into the culture and community here at Pepperdine,” Longo said. “We love to highlight students and just make our student body shine, whether that’s through profiling like our student business profiles, professor profiles or through, you know, covering events like plays, Dance in Flight, [and] stuff like that.”

Giving back to this same community in the form of accurate reporting, Longo said her staff focuses on fact-checking, adding in context when necessary, extensive editing and finding reputable and diverse sources.

“I push for a really strong emphasis on diversity this semester, just to make sure that everything is well rounded and we are trying to represent the Pepperdine student population as fairly as possible,” Longo said.

Every buzzer hitting three-pointer to record-breaking track run eventually finds it way to the sports section of the Graphic. Similar to Life & Arts, the Sports section connects to the community through sports and feats of athleticism.

Sports also isn’t just backstage exclusives with players and game highlights. The team also covers important stories and conditions the players face. The biggest aspect of news literacy, especially for sports, is confirming pieces of information that players may not even be able to go on record about, such as the Sports section’s titled “Pepperdine Cross Country/Track Athletes Describe Misconduct of Former Coach.”

While most sections of the news focus on reporting, Opinion pieces allow journalists to give perspective on how the news influences our changing world.

Perspectives not only has to be conscious of the news but also attached to the communities that are affected. While news journalists of course care about the community, empathy is not always a fundamental part because it’s mainly their job to report the facts. But, op-ed journalists write about topics that come from the heart, making their pieces a representation of their character and personality.

Unfortunately, op-ed reporting isn’t perfect, and in regard to news literacy, it’s still developing ways to make sure the public understands its difference from other forms of news.

For instance, at the Graphic, Perspective articles now have the word opinion before the headlines and editor’s notes are used more frequently to help audiences understand new columns and article series.

Moreover, Perspectives is constantly expanding its opinions and tries to include diverse viewpoints. This section is meant to highlight all the ways society thinks and expresses itself, so that means no matter the race, ethnicity, sexual orientation or political affiliation, every opinion— supported with facts, of course — is welcome to be shared.

What Can Still Be Done?

It would be disingenuous to simply pat ourselves on the back for the work the Graphic has already done — and frankly, it wouldn’t make for a good Perspectives piece. From where the Graphic is currently situated, there is only room to grow.

First and foremost, editors must improve the accessibility of resources to their readers. This could look like a more consistent section in the physical paper where staff can address big ethical issues included in the paper, rather than limiting that space only to digital content. Additionally, the Graphic’s social media accounts could initiate a social media campaign to promote more bite-sized literacy discussions.

Consistency of critique must always be a priority. It is the Graphic’s responsibility to address each and every instance of questionable accuracy before the reader. While the Graphic has been consistent in this pursuit for the past year, it must remain so even if it requires additional forethought.

Next, we must be proactive in educating our community, rather than waiting until a story is published. As a co-curricular organization registered both by the Communication Division and by Inter-Club Council, the Graphic has the same privileges as any student-led club and then some. Hosting public workshops for students to learn about news literacy, town halls to address student concerns and events to get to know the student population on a more individualized level is well within its ability.

As Pepperdine’s primary news outlet, it must be our responsibility to earn our readers’ trust and bring them into the light, lest we leave them in the dark.

Finally, there are still small in-house concerns that need to be looked at within the Graphic. Diversity in news is great, but it’s not possible without embracing and knowing how to accumulate and manage a diverse staff. This also consists of communication and conflict resolution: Good reporting and good media require a good team that is capable of communication and resolving conflict as it happens.

This doesn’t just mean having diversity training for POC but having training on what effective communication looks like and how to confront uncomfortable topics and situations to resolve them — not to stir the pot.

The Graphic is an award-winning newspaper and has many admirable qualities when It comes to news literacy, but that doesn’t mean we are perfect. As a news organization, there are many things we can improve upon both internally and externally.

The best part of remaining news literate is that everyone needs to constantly be improving, and the Graphic is no different. 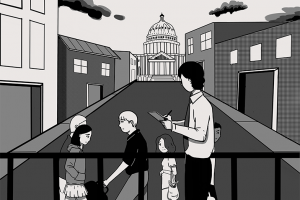 Art by Leah Bae Many say 2020 was a year full of misinformation and disinformation. With the evolution of journalism,...
Copyright 2013 Jupiter Premium Magazine Theme
Back to top