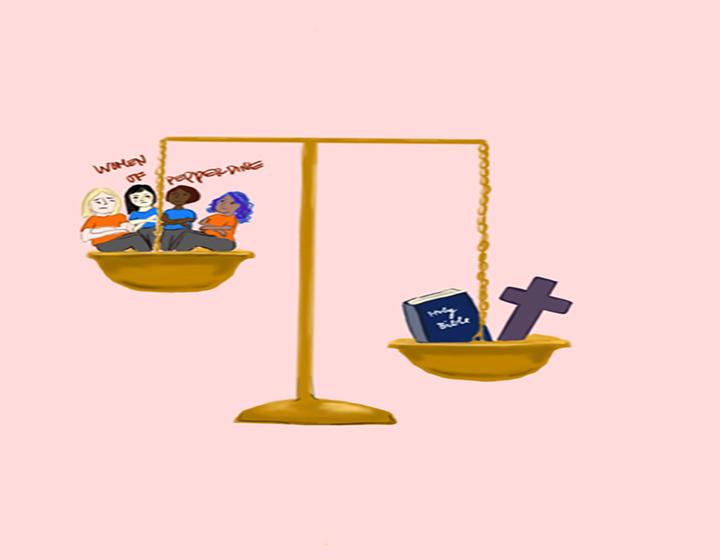 Both recent actions and old traditions place Pepperdine with the former rather than the latter.

In July 2020, Pepperdine removed Planned Parenthood from the Pepperdine Resource, Youth Diversion and Education website after the anti-abortion group Students for Life Action contacted the University.

“Pepperdine’s Vice President [Danny] DeWalt thanked us and said that they had Planned Parenthood removed from their website immediately,” according to SFLA’s website.

Now, other anti-abortion organizations are bragging about the “win” in convincing Pepperdine to stop promoting Planned Parenthood.

This action may seem insignificant, but it conveys a deeper message: Pepperdine favors conservative Christian beliefs over students’ health and safety.

The SFLA website lists “Kicking Planned Parenthood Out of Christian Schools” as proof of its success. The page also states that the organization works to “ensure the abortion industry cannot take over towns, commit abortions, and suck-up taxpayer money.”

Though SFLA uses the terms interchangeably, Planned Parenthood is not “the abortion industry.” Planned Parenthood delivers vital reproductive health care, sex education and information to millions of people worldwide, according to its website. Because of the Hyde Amendment, taxpayers do not pay for abortions.

Hours after Kamala Harris became the first Black and Asian American woman to be nominated vice president for a major party, SFLA posted a scathing critique calling her an “abortion extremist.”

An “abortion extremist” is a made-up concept that implies someone relentlessly promotes abortions or pushes them onto others; Harris merely supports legislation giving women the right to govern their own bodies. Anti-abortion extremists, on the other hand, have committed countless acts of terrorism, violence and harassment, including murders of innocent doctors and women.

It is troubling that Pepperdine would obey the demands of an organization whose website is plagued with false and misleading claims, extremist views and hateful rhetoric.

Pepperdine already took a stance on the issue by posting Planned Parenthood on its website in the first place. There were no student protests, Freedom Wall displays or Graphic op-eds calling for its removal. In removing the resource, however, Pepperdine is showing the community that its views have shifted. It now conveys the message that access to crucial health and educational resources is unimportant — and neither is a woman’s right to make life-changing decisions for herself, like opting out of a pregnancy.

Even though other schools in Southern California list Planned Parenthood as a resource on their websites, one might argue Pepperdine should avoid controversial issues to prevent conflict among students and faculty.

Past events prove Pepperdine does not mind controversy when it comes to protecting its Christian values. The institution maintains a sexual relationship statement that states, “Pepperdine University affirms that sexual relationships are designed by God to be expressed solely within a marriage between husband and wife.”

Most schools do not have sexual relationship statements — for good reason. It is inappropriate and unnecessary for a school to comment on the topic unless it is creating a more inclusive environment by stating that all types of consenting relationships between any gender or identity should be accepted.

Pepperdine, however, defends this statement, which was last updated in 2017, because it is a reflection of its Christian principles.

Though many Christians are supportive of the LGBTQ+ community and sexual freedom for women, others use text from the Bible to justify their hate.

The Bible’s discussion of menstruation, in particular, is sexist.

In Leviticus 15:19–30, God gives a lengthy lecture explaining that everything and anyone a woman touches while on her period becomes “unclean.” She, of course, is the most “unclean;” she should not be touched, slept with or allowed in temple during her monthly cycle.

While universities such as Harvard, Yale and New York University run programs that distribute free menstrual products to students, Pepperdine’s treatment of periods is less than satisfactory.

Junior Grace Ramsey brings up a valid point that most vending machines on campus have options for credit card payments; however, the menstrual product machines in women’s restrooms are still slotted coin machines.

“They are about as reliable as a slot machine,” Ramsey wrote in an email to the Graphic.

In Ramsey’s experience, the machines are often empty and do not issue refunds. Additionally, the various on-campus restrooms inconveniently charge different amounts — some require dimes, while others require quarters — making it difficult to prepare.

This may seem like a mere annoyance, but it contributes to period poverty and gender disparities.

In the United States, one in five teenagers have struggled to afford period products, and one in four have missed class because they did not have access to period products. Students, specifically, are one of the prominent groups in the U.S. who face period poverty, which is defined as limited access to menstrual products due to a lack of income and resources.

“For something that is such an integral part of most women’s lives, it seems like periods are an afterthought when it comes to Pepperdine bathrooms,” Ramsey wrote. “Whether your period is an inconvenience or a source of economic stress, Pepperdine should be doing more for the thousands of people on campus who need these products to live their daily lives.”

This, however, is not solely a women’s issue; women are not the only people who get periods.

Since Pepperdine does not have gender-neutral bathrooms, some transgender students might need access to menstrual products in men’s rooms.

“I fully believe that free products should not only be in women’s restrooms but also men’s restrooms,” Ramsey wrote. “Pepperdine has terribly little to say regarding its trans* students, but this might go a long way in making people feel more welcome on campus.”

If Pepperdine wanted to commit to being an inclusive institution, as it recently stated, it would take the extra steps to show love to marginalized students rather than passing subliminal, Bible-age judgment on them.

As the world has evolved, so have many Christians. Pepperdine needs to join them in extending love to all students and faculty, regardless of their sexual preferences, gender identity or views on abortion.

Pepperdine should not only place itself on the right side of history but on the loving side of Christianity. It is time for the University to re-evaluate its “Christian values” to reflect the diverse world we live in.