Opinion: ‘If It Bleeds, It Leads’ — The Modern Implications of an Outdated Phrase 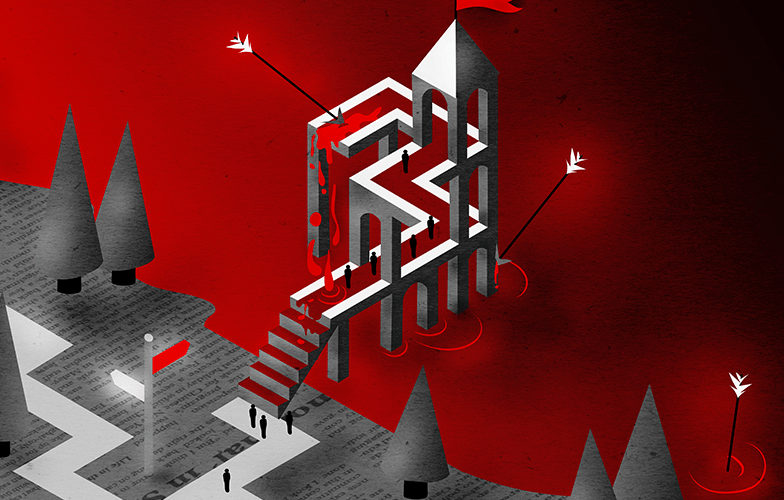 As a problematic phrase with dehumanizing connotations, “if it bleeds, It leads” represents the reality behind why the most gruesome stories get breaking coverage and front-page news.

Are people being subconsciously desensitized to death, violence and pain with constant exposure to the worst parts of humanity? The issues of this phrase imply that the most shocking and horrendous events get the most attention in the scope of news. “if it bleeds, it leads” must be left out of newsrooms and replaced with a greater emphasis on exercising more compassion and empathy.

Popularized at the end of the 1890s, William Randolph Hearst began using it during the first “media war” alongside Joseph Pulitzer, according to PBS. During the same time of the Spanish-American War, Hearst ran a newspaper that relied on sensationalizing stories of drama and violence. Once he began realizing what caught the audience’s eye was showcasing a horrific incident, he developed the phrase “if it bleeds, it leads.”

A phrase like this may have been warranted during the 1890s because of the pressure to come out on top of the media war. However, it is no longer the 1890s, and the impact of its precedent established an unethical and seemingly unsympathetic baseline of how reporters should tackle stories with difficult subject matters. Rather than taking the phrase literally, stories about violence and death should be approached more humanely and with greater sensitivity.

Cumulative exposure to traumatic events, such as what’s reported in fear-based news, becomes the subconscious lens through which people view the world, according to a 2008 Psychoanalysis and Psychotherapy article.

Seeing excessive amounts of death and violence inherently creates rifts in people’s capacity for empathy since we begin to look at society as innately bad and inherently “replacing optimism with fatalistic thinking,” according to the same article.

Looking at the world today, a rise in traumatic events toward members of the Asian-American Pacific Islander community has been a result of xenophobic sentiments surrounding COVID-19.

Anti-Asian hate crimes increased 149%, according to a 2020 study from the Center for the Study of Hate and Extremism at California State University San Bernardino. A plethora of violent acts toward the Asian community consistently populate recent headlines, but are people taking the time to process the implications of such brutalities and how they affect us?

“If it bleeds, it leads” is standing between a viewer’s ability to understand the extremities of the violence and death they are consuming and a reporter’s ability to cover a hard topic free of the confines of this phrase.

Aspiring and veteran journalists should be encouraged by their editors and publishers to be more compassionate and to not always prioritize the most heinous stories. Not all reporters ascribe to the phrase, but newsrooms should make an active effort to denounce its presence in the workplace.

Newsrooms and editors should educate journalists on how to show greater depths of compassion and to comfort the afflicted rather than simply covering a gruesome headline story of an “it” that “bleeds.”

For the past five years, Alma Fausto of the Orange County Register has been reporting crime and public safety, subject matters that allow her to understand what a violent incident can look like from the perspectives of the victim, the suspect and their respective families.

The implications of “if it bleeds, it leads” is reflective of the popularity of crime reporting that stems from how it appeals to a person’s morbid interest as well as their desire to stay informed with what’s transpiring in their community. However, with the rising popularity of true-crime series like “Crime Scene: The Vanishing at the Cecil Hotel”, horrible things happening to good people is a concept that production companies have glorified.

“I think that if TV didn’t exist, if newspapers didn’t exist, people would still be interested in an occasion of violence,” Fausto said. “Social media, Netflix crime series, documentaries, everything really, appeals to people’s voyeuristic tendencies because so many of these productions, and stories, and papers and magazines make especially things like murder seem interesting to try to solve.”

Director and Journalism Professor Mark Jacobs covered countless events of violence during his time as a former photojournalist, including the War in Iraq, the War in Bosnia and the Columbine shooting in Colorado.

“We all carry a TV in our phones now, and it actually goes off and reminds us when something bad happens,” Jacobs said. “We’re never out of touch with all the bad things that happen in the world, and then when we read what’s happened. I think there’s a lot of desensitizing that happens, especially for our youth, because once you start to see bodies and death and blood, you become numb to it.”

Though the circumstance of “if it bleeds, it leads” has evolved from its 19th-century origin, the implications of it remain the same. Not only does it no longer belong in newsrooms, but its effects are inadvertently harming the viewers who are absorbing the same stories about death and violence that reporters are instructed to cover.

“None of these crimes hit home until they hit home,” Fausto said. “Everyone feels like they’re desensitized until something horrible happens in their backyard, and then it hurts because it’s real.”

There is a fine line between the desire to stay informed while maintaining one’s mental health. Though it’s important to be up to date about what is happening at both the local and national levels, knowing when to turn off the phone and take some time away from the chaos in the world is equally as important.

“if it bleeds, it leads” should be a phrase of the past, as it forces journalists to subscribe to the false narrative that death is what people care about most. Reporting on death and violence will always be important and likely continue to dominate headlines, but the phrase that enables this content should be entirely abandoned. 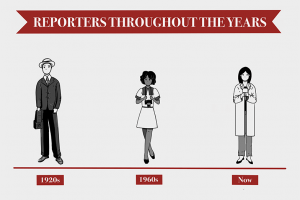 Art by Leah Bae From the emergence of jazz journalism in the 1920s to contemporary reporting, the media continuously helped...
Copyright 2013 Jupiter Premium Magazine Theme
Back to top