One individual’s passion is the driving force behind all planning, funding and management operations at the Malibu Community Labor Exchange (MCLE).

Since the organization opened in 1993, Center Director Oscar Mondragón has been connecting people looking for work with people looking to hire on a daily basis. The MCLE serviced 3,272 workers in 2018, according to an annual internal report. The nonprofit’s services are free of charge for both workers and hirers.

“Helping is a part of my personal life,” Mondragón said. “Finding jobs is the main thing we do here, but many times people want some direction with a problem they are facing.”

Mondragón worked under the leadership of Cesar Chavez for the United Farm Workers union. In the 1960s, Chavez secured raises and improved conditions to underpaid and discriminated farmworkers through marches, boycotts and hunger strikes. Mondragón said he emphasizes a core value of contributing his part to equity of workers in any way possible.

Mondragón actively pursues this value through his self-proclaimed dual role as the center’s director and mentor. Many workers, he said, rely on the jobs they find through the MCLE for their livelihood.

“The chance at having a job is what gives a sense of self-worth,” Mondragón said. “It allows you to accomplish something for you and your family. So yes, it is independence. But more than that it creates a certainty that you don’t have to rely on somebody else’s back. It’s your own effort.”

The MCLE does not discriminate and anyone with a picture ID can access its services. Homeless workers made up 16% of total jobs in 2018, according to an annual internal report.

“Here, we don’t judge people,” Mondragón said. “Anybody is welcome.”

The organization provides day labor jobs in areas such as construction, landscaping, nannying, housekeeping and more. The jobs range from hourly assignments to years of employment.

“One worker came here 20 years ago and since then, he has been working for the same family,” Mondragón said.

Since its opening, the MCLE has functioned out of a trailer next to the Malibu Public Library. Mondragón said he faces many challenges in operating the nonprofit. 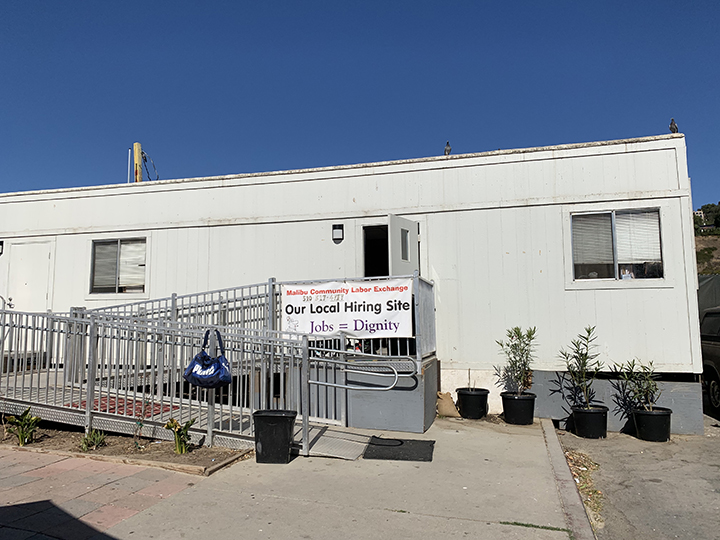 The Malibu Labor Exchange is centered at a trailer. Mondragón said he is grateful for the Malibu community’s support for the organization.

“Survival is a daily struggle,” Mondragón said. “We don’t get money from anybody. Nobody is sending a check every month to keep this place open. Although there’s only one employee here, myself, I have to do everything, and it costs money.”

However, Mondragrón said the MCLE’s success is due largely in part to the support of the Malibu community.

“But we’re still here after 26 years,” Mondragrón said. “So that tells you something about how people here care. It’s a community creation, supported by the local residents.”

Originally from El Salvador, Miguel Ángel Flores is a Los Angeles resident who has been coming to the MCLE for the past 17 years.

Flores said he is grateful for the opportunities he has found through the organization.

As a father, Flores said he urges Pepperdine students to study and take advantage of every opportunity.

“Es el mejor futuro para que cada persona se supere [It is the best opportunity for self-improvement for anyone],” Flores said. “Para mi, ver a una persona que estudia mucho en la universidad es un orgullo porque yo tengo un hijo y quiero que haga lo mismo. [To me, seeing people studying hard in college is a reason to be proud. I have a son and I want the same for him.]”

Through the Volunteer Center (PVC), Pepperdine students have the opportunity to meet workers like Flores and help them to learn English.

PVC Neighbors Coordinator Leah Taylor works for an a subsection that focuses on marginalized populations within the Malibu community.

“Working at the Labor Exchange has been a wonderful experience,” Taylor wrote in an email. “It is a great way for students to move out of the ‘Pepperdine bubble’ and work with groups they might not usually have contact with, allowing for growth and cultural competence.”

Mondragón said he estimates over 20,000 workers have been serviced since the organization opened, fulfilling the company mission.

“At the end of each day, we measure the jobs that we got and how many people went to work,” Mondragón said. “That’s our daily mission: work. But when people are looking for work and they find it, that gives them direction and a sense of a better life.”