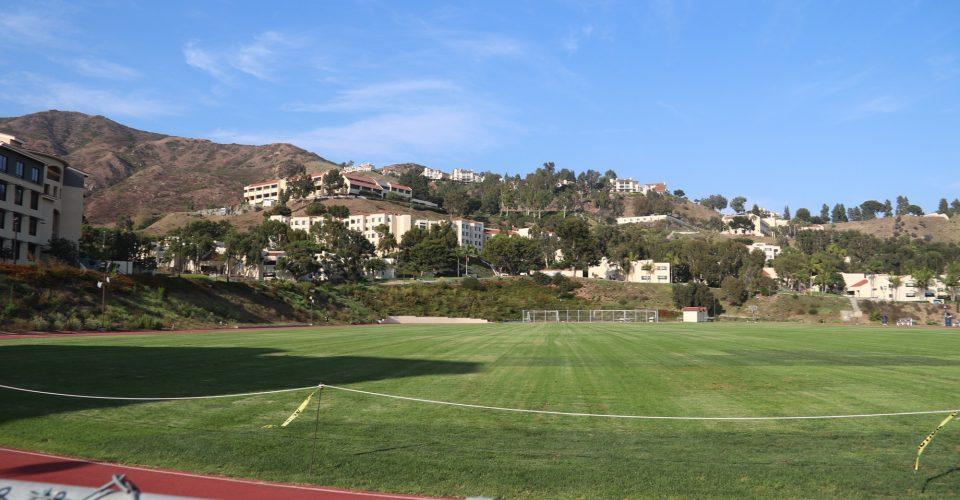 For the first time since the construction of Seaside, Pepperdine has a waitlist for housing.

Due to a large incoming class of first-years and a limited number of sophomores participating in International Programs, Pepperdine’s Housing and Residence Life is scrambling to find beds to place students before the start of the fall semester.

“My heart goes out to our students, but it’s a math dynamic: We have a certain number of beds, and we can’t fit everyone this year — and it’s unfortunate,” Housing Director Robin Gore said.

In a typical year, Housing and Residence Life aims to fill about 2,400 beds, Gore said. In March, HRL had typical numbers — maybe even a little lower than typical.

“It was normal, other than we were running about 100 students short from where I — looking at the big picture — wanted to be,” Gore said. “Actually, in the spring, I was a little nervous that, ‘Oh no, if we have a normal year, we might miss our numbers.'”

As of July 23, the University expects 2,500 students to live on campus for the fall.

May 1 is Pepperdine’s deadline for admitted students to commit and place their deposit, and Gore said the number of first-years stabilized in June. As of July 23, Pepperdine anticipates 1,100 to 1,200 new students, all of whom are required to live on campus.

“Typically, we have around 900 to 950 living in the residence halls, so you can see where that puts pressure on those lower halls,” Gore said. “We can’t fit all of our first-year students in our traditional first-year housing.” 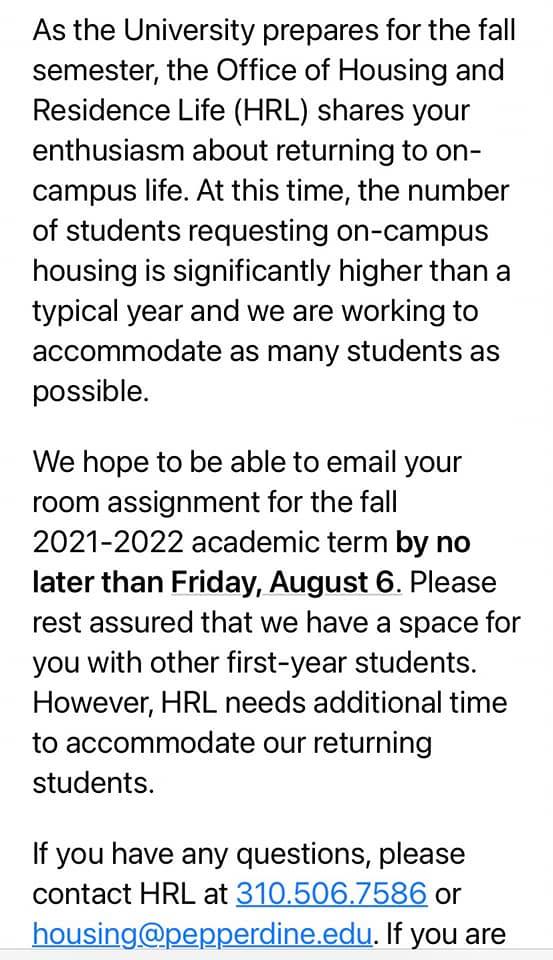 An HRL email sent to first-year students and parents details the challenges Pepperdine faces with housing lower-level students for the fall semester. Pepperdine expects between 1,100 and 1,200 new students in the fall. Screenshot courtesy of the Class of 2025 Parents Facebook group

In years prior, approximately 400 sophomores studied abroad during the academic year, Gore said. This year, with only four International Programs locations with plans to run for the fall, closer to 100 students will be studying abroad, leaving 700 sophomores living on campus.

Returning students (sophomores, juniors and seniors) could apply and select on-campus housing as early as March 10. HRL would consider those who applied later, like junior Tise Davids, on a rolling application status in a normal year. This year, there’s no assurance on Davids’ application.

Davids said she originally hoped to live off campus for the 2021-22 academic year, but certain factors — such as the expensive Malibu housing market and her lack of reliable transportation — pushed her to apply for on-campus housing for the fall.

After submitting an application, Davids said she didn’t hear back from HRL, and in mid-July, she called and emailed the office to get a response. After getting through to a representative, Davids was told she “never completed her application” and shouldn’t have expected a room assignment, she said.

With a large incoming first-year class and an atypical number of sophomores remaining on campus, other parts of Pepperdine’s capacity will face pressure along with housing.

Dining and parking are two immediate examples. With one primary cafeteria (the Waves Cafe) and student parking lot (Rho), those on campus in the fall can expect longer wait times and more difficulties finding a place to park.

Within HRL, roommate switches will be harder with less open spaces to relocate students unless it’s an even exchange between rooms, Gore said.

“We don’t have those pockets to move people around, so if a student’s not getting along with their roommate, that’s when we need to leverage those communication skills and work with the RA [Resident Advisor] or RD [Resident Director] to talk through how we can make the current roommate configurations work,” Gore said.

The University is trying to be creative in solutions for housing students, Gore said.

Earlier in the summer, HRL asked first-year students to consider living in a triple for a discounted rate, which could have provided 100 additional beds to the lower-level dorms.

“We only had enough interest to increase 18 beds, so that’s not enough, and we didn’t want to force the issue,” Gore said. “Especially with us still being in a COVID dynamic, it just doesn’t make sense in a pandemic to increase occupancy when we are wanting to still slow the spread.” 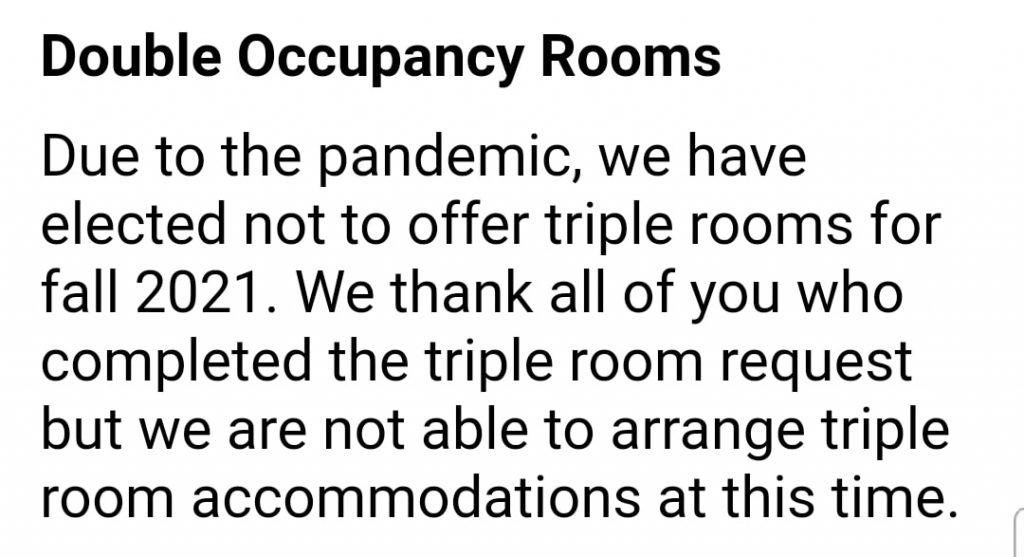 A screenshot of an HRL email sent to first-year students and parents regarding occupancy numbers for the fall. Pepperdine considered triple-bunking students to accommodate for the large incoming class but decided against it due to a lack of interest and COVID-19 concerns. Screenshot courtesy of the Class of 2025 Parents Facebook group

To accommodate lower-level students, HRL is placing them wherever there is room, putting first-years and sophomores in graduate housing when necessary, Gore said. First and second-year students will also pay the higher rates if moved to Drescher or George Page but will live with students in their same year to preserve the typical University housing experience.

Pepperdine is also incentivizing students to move off campus by waiving the $500 cancellation fee, Gore said.

HRL considered utilizing faculty housing, but this plan is still in the works — “potentials,” Gore called it.

Pepperdine’s hotel on campus — The Villa Graziadio — served as quarantine space for students who tested positive in the 2020 academic year and may be utilized for student housing or isolation space.

Davids said the University was unhelpful in providing alternative solutions for fall 2021 housing.

“Basically what they offered me was some hotels that were letting students stay there for I think starting at 10k a month,” Davids said. “It honestly felt like a slap in the face.”

Losing the option of on-campus housing for the fall pushed Davids to withdraw for the fall 2021 semester because classes start in a month and she doesn’t see any other solution, she said.

Students and parents expressed concern to the Housing Office regarding room assignments, Gore said. Students come in with expectations of what their dorm will look like after completing campus tours, watching videos or doing other research, so learning they may not get that experience can be confusing, especially for first-years, Gore said.

For Davids, her experience with the Housing Office paints Pepperdine in a bad light, she said. 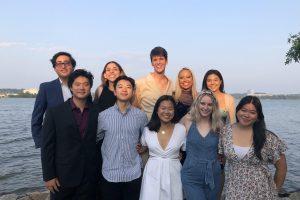 The participants of the Washington, D.C., summer program take a picture at the End of Program Banquet July 21. Due to the small...
Copyright 2013 Jupiter Premium Magazine Theme
Back to top