When freshman Taylor Barnett came to Pepperdine, she was excited to have a Malibu ZIP code and be surrounded by the beautiful Pacific Ocean.

Caught in the Headlights — Deer are a part of everyday life for students. They have adapted to the encroachment on their natural habitat by roaming campus freely.(Genevieve Smith)

Barnett and her roommate Khali McRae soon learned that Pepperdine’s campus — nestled as it is in the Santa Monica Mountains — had some natural hazards: mule deer.

While driving back on campus late one evening, McRae slammed her brakes to avoid a deer that had vaulted over the brush and into the street. It was a narrow miss, and McRae said she finished her drive shaken.

“It literally came out of nowhere,” McRae said. “I wasn’t expecting it at all.”

McRae’s story isn’t all that surprising to people on campus, but the facts behind Pepperdine’s coexistence with the deer might be.

Every year, about 1 million car accidents with deer occur, killing 200 Americans, according to the National Highway Traffic Safety Administration. In fact, the most dangerous mammal in North America may be the deer.

Department of Public Safety officials said they have no data on how many deer have actually caused accidents at Pepperdine, but anecdotes like McRae’s of near-misses are common.

“It does happen at Pepperdine, but not at a frequency that is notable,” DPS Deputy Director Dawn Emrich said. 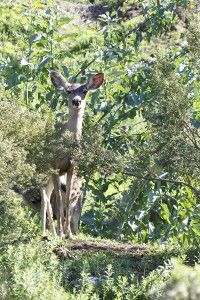 “To a starving deer, this is heaven,” Honeycutt said.

So they populate campus and consume the landscape, making them vulnerable to cars, Honeycutt said.

“Malibu has experienced very little rain for most of the summer and late spring,” Honeycutt said. “Plant productivity from the native chaparral is low, and the older leaves are not optimal for deer. When we receive rain in the winter and early fall, the chaparral respond by producing new leaves and blooming. At this time, deer are less plentiful on campus because they prefer the new growth from native plants. This is one reason why they forage throughout the day.”

Honeycutt also said he has noticed corn placed near the roadside of the intersection across from the dorms by Rho parking lot. He wondered if someone on campus might be responsible.

“This is a bad idea because it encourages large number of deer to feed next to the road, thus increasing the possibility of an accident,” Honeycutt said.

The deer on campus are primarily adult and subadult females with fawns, Honeycutt said. Generally, mule deer form female groups consisting of an older female, her daughters and young of the year.

“The breeding season or rut begins in the fall. The campus generally sees one or two larger, more dominant males at this time,” Honeycutt said. “The males tend to the females for several weeks and then disappear again.”

And in a healthy population with plenty to eat, female deer usually have twins. This is not the case with Pepperdine’s deer, primarily because there is not enough to eat. Honeycutt also stated that coyotes, bobcats and mountain lions kill many newborns.

Honeycutt added that it is a challenge in a high-deer-populated area to maintain landscaping.

Students see the deer in the bushes in the daytime eating grass or just resting. At night, they can be intimidating, according to some Seaver students.

“I was walking back to my dorm at night from the HAWC, and I heard something in the bushes,” freshman Anthony Brown said. “I put my phone light towards the bushes and saw the deer staring at me, and I backed up and ran.”

Many students remark that the deer harmless and cute. Cuteness, however, only goes so far when deer block a student’s path. Freshman Taylor Pugh said she normally doesn’t mind the deer, but late-night encounters sometimes cause her to question her safety.

“I feel the deer are too close to us,” Pugh said.

Loneliness is a problem at all college campuses, but Pepperdine has significantly higher numbers of lonely students, according...
Copyright 2013 Jupiter Premium Magazine Theme
Back to top