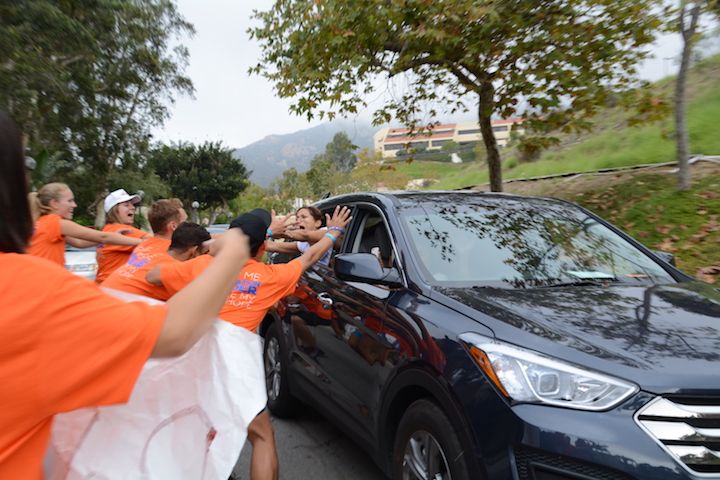 In your face, in your ears and — for those who don’t have a penchant for thunderous voices and spontaneous dance parties — perhaps even in your nightmares: New Student Orientation Leaders are literally (literally!) everywhere.

It’s hard for anyone to imagine that these upperclassmen wake up every day with a yearning to lift thousands of pounds of luggage up countless flights of stairs for hours on end, or that their everyday lives actually involve as much carefree frolicking as freshmen see during their first few days on campus.

The whole spectacle begs a few questions: Did Starbucks just come out with an even more potent cold brew? Are students at Pepperdine this happy and energetic all the time? Are the Orientation Leaders actually feeling that high on life?

Since their downtime is almost nonexistent, it’s hard to catch Orientation Leaders when they have some free time to talk. But when asked about how they were feeling amid the craziness involved with freshman move-in day, the overworked upperclassmen spoke candidly for what seemed to be the first time in days.

Senior Hayley Berry noted not only her own fatigue but also the rising tension among those around her.

“I really enjoy this, and I think it’s a lot of fun, but it’s extremely exhausting, and my legs can barely move,” she said while on her way to help unload another car. “I feel like people are getting tired — there’s cattiness and a lot of attitude. I know it’s toward the end, and people are hungry and tired, but it doesn’t excuse that kind of behavior. But with the stress of NSO, it’s really not surprising.”

Sophomore Wes Ervin said he felt similarly. “I’m exhausted, and I’m starving,” he said. “Also, I’ve been sweating through my shirt since I got up this morning at 5 a.m. When’s dinner?”

Though the Orientation Leaders were drained and weary, many of them, including junior Joan Daly, were quick to highlight the rewarding aspects of coming back to campus 10 days before school starts.

“I definitely feel tired, I’m not going to lie,” Daly said. “But you really do feel appreciated. People have been so gracious. Even though you’re exhausted, and all you want to do is lie down and sleep forever, people really appreciate what you’re doing. At the end of the day, you know you made a difference in someone’s day because they didn’t have to carry all those boxes.”

“It’s pretty rewarding,” said junior Tanner Wildason, in between welcoming new residents to Phillips Hall. “It’s tiring, of course. I feel grimy, and I’m amazed [by] how much stuff people actually have. But at the end of the day, I would do it all over again.” He said he also believes that if all of the female freshmen combined their wardrobes, every single article of clothing from Anthropologie would be accounted for.

Senior Alex Lazear reported that parents frequently attempted to tip him while helping their children move in.

After spending the morning hammering away at eight different wooden bed frames, junior Chase Patton said he now considers himself to be a professional bed raiser.

Although NSO involves a great deal of physical labor for Orientation Leaders, the emotional effort required to constantly stay upbeat in front of timid freshmen and their families is equally taxing.

“I don’t think the exhaustion is physical,” Wildason said. “It comes more from constantly evoking a positive sense of emotion — always being inviting and welcoming and trying to also be genuine behind it all … takes a lot out of you.”

Others, including junior Megan Young, didn’t feel the need to fake their emotions.

“I don’t feel like I’m putting on a face,” Young said. “I’m genuinely excited to be here. I’m tired, but I feel fulfilled.”

Despite being fatigued, sweaty and ravenously hungry, many believe that being an NSO Leader is worth every second of hard physical and emotional work. “I feel like I’m falling in love with Pepperdine all over again,” Wildason said. “[NSO] makes you realize why you’re here. You get to know and care about the freshmen while you carry their oversized luggage. And that’s an experience you can’t put a price on.”

Perfecting the Malibu Style isn’t as Hard as it Looks 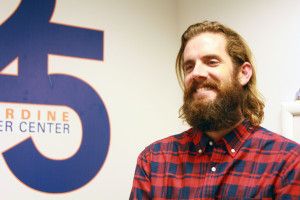 Photo by Julia NamanMany are aware that the Pepperdine Volunteer Center exists, but we often let it escape our attention....
Copyright 2018 Pepperdine Graphic
Back to top