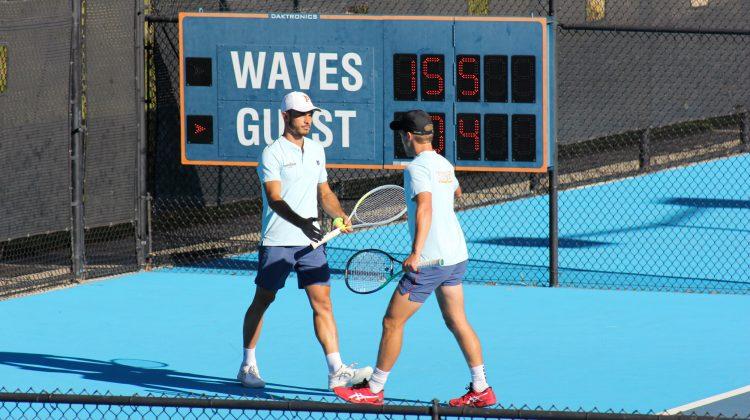 Seniors Corrado Summaria (left) and Tim Zeitvogel (right) discuss after a point in their doubles match against University of Arizona at the Ralphs-Straus Tennis Center on Jan. 23. Summaria and Zeitvogel won their match 6-4. Photos by Audrey Hartono

The Waves won the doubles point and four of the six singles matches to finish the heated contest 5-2. No. 8 senior Daniel De Jonge, No. 24 sophomore Pietro Fellin, graduate student Eero Vasa and junior Eric Hadigian all got singles wins for the Waves.

“It makes it that much more meaningful, to not just to win a match, but also to win a match that came down to toughness,” Head Coach Adam Schaechterle said. “[Arizona’s] culture is so tough and so gritty and they’re incredible competitors, so to be in an absolute battle and come out on top is really special.”

The Waves had a bright start, earning the doubles point through wins by Fellin and graduate student Andrew Rogers and seniors Corrado Summaria and Tim Zeitvogel. Summaria and Zeitvogel were the first to finish their match, and Fellin and Rodgers finished shortly after. Both matches ended 6-4 in favor of the Waves. De Jonge and Vasa, playing on Court 1, left their match unfinished, with the score poised delicately at 5-5.

“Really, what I was proud of was the way our guys stuck together and trusted each other,” Schaechterle said. “It felt like our leaders did an amazing job in doubles.”

In singles, the Waves and the Wildcats traded quick wins to start things off. Zeitvogel faced off with sophomore Herman Hoyeraal, who rode his powerful serve to a 6-2 first set win. The second set proved much more of a fight, with Zeitvogel finding more of a rhythm in his return game. But Hoyeraal was able to hold off the comeback, and took the second set 7-5.

Court 1 finished soon after, with De Jonge defeating sophomore Gustaf Strom by the same 6-2, 7-5 scoreline. De Jonge looked comfortable in the first set, and was able to keep pace as Strom looked to get a foothold in the match in the second.

“The team win was the most important thing,” De Jonge said. “Individually, I’m really happy that I could lead the way. There’s definitely things that I can do better, but I’m just really happy with the fighting spirit from everyone.”

Hadigian put the Waves on the doorstep of victory a short while later when he bested his opponent 6-3, 7-5. Up 3-1 overall, the Waves needed to win just one of the remaining three singles matches to claim a coveted victory over their higher-ranked opponent.

They’d have to wait a while, though, as the remaining three matches all went to deciding third sets. On Court 3, No. 15 Rogers bounced back and won his second set 6-2 after dropping the first set 6-4. Rogers could not complete the comeback, though, as he lost the third set 6-3.

The nerves from Waves players, coaches and fans were palpable, as Fellin’s match on Court 2 and Vasa’s match on Court 5 hung in the balance. All eyes ping-ponged between the courts, hoping to witness a decisive point.

“Honestly, I always get even more nervous when I watch than when I play myself, because it’s out of your control,” De Jonge said. “It’s such an emotional rollercoaster, so sometimes I prefer that I’m the deciding match and still playing.”

Court 3, now empty of tennis, hosted a new kind of match. Pepperdine and Arizona players stood on opposite sides of the net, cheering on their teammates with growing enthusiasm. “U of A! U of A!” the Wildcats yelled, drawing up a “Whose house? Our house!” reply from the Waves.

“They’re known to be one of the loudest teams in the country,” De Jonge said. “They’re really trying to make you uncomfortable in the situation, so we knew that, as soon as it started, we had to do the same thing. In the end, with the clinching match, obviously it’s going to be a battle of who is the loudest, and I think we did a pretty good job of standing strong.”

Vasa, who joined the team a few weeks ago after transferring from Cornell, picked up the decisive singles win for the Waves. After splitting the first two sets with senior Carlos Hassey 6-2, 5-7, Vasa took the third set to a tiebreak, which he won 7 to 5. Upon winning the final point, the Waves players mobbed Vasa in the middle of the court.

“He did such a good job, especially in the deciding tiebreaker, just to keep hitting his shots,” De Jonge said. “He went for it; he didn’t hesitate. It seemed that he wasn’t nervous. It was an amazing performance.”

Attention turned to Court 2, with Fellin and senior Jonas Ziverts still locked in a third set. Ziverts came out firing in the first, which he took 6-1, before Fellin tied the match at a set a piece with 6-4 second set win.

Fellin, who struggled from the baseline early, increased his shot accuracy as the match progressed. The sophomore displayed impressive endurance and defense on a number of points down the stretch, at one time staving off three match points. Fellin went on to claim the third set 7-5, completing his comeback and ending the match on a positive note for the already victorious Waves.

Men’s Tennis, now 2-2 overall to start the season after a win against Oklahoma State on Feb. 5 and losses to No. 16 Stanford and No. 24 Harvard on Jan. 21 and Jan. 29, respectively, are seeking to build off last season’s WCC title. They’ll have to work through a schedule that both players and coaches described as extremely challenging.

“A lot of it comes down to being present every day, trying to work on little things,” De Jonge said. “If we’re thinking about who we’re playing in three to four weeks, that’s not going to be the right mindset. We have to approach every match and make sure we’re ready for that.”

The Waves are coming off the back of a successful fall campaign. De Jonge and freshman Linus Carlsson Halldin won the doubles title at the Milwaukee Tennis Classic on Sept. 20. Rogers claimed the singles title at the ITA Southwest Regionals Championship held in Malibu on Oct. 22-26, after defeating Fellin in the finals.

As for the team’s goals this spring, Fellin cited aspirations of being ranked high enough to host games in the NCAA tournament in May. But players and coaches also reiterated the importance of staying in the moment and trusting in hard work at practice.

“As the main mindset, and the thing we bring into practice, is just to get as good as you can,” Fellin said. “Get better every day, and the results will come.”

The Waves take the court against Tulsa on Sunday, Feb. 6, in Tulsa, Okla.