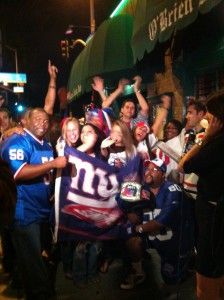 It’s no news that the New York Giants won the XLVI Super Bowl in Indianapolis, Indiana, 21 to 17 against the New England Patriots, this past Sunday.  Although most fans of the competing teams were not at the Lucas Oil Stadium, many were not even in their hometowns.

The 2012 Super Bowl was packed with action from the close game to the spectacle of a halftime show.  Madonna’s moves with surprise performances from LMFAO, Cee Lo, Nikki Minaj, plus M.I.A.’s controversial hand gesture caught tons of media attention.  So did supermodel Giselle Bundchen’s comments defending her husband Tom Brady the next day.  The spotlight has remained on the “Big Blue” as Super Bowl XLVI MVP Eli Manning was honored Monday at Disney World, and yesterday New York City held a parade for the champion team.

But, New York Giants fans in Los Angeles made sure that they felt like they were at home and part of the action.  Meetup.com hosts official fan group events for various sporting teams across the country, catering to the various transplants.  The New York Giants fan diaspora in Los Angeles convened on Sunday at unofficial New York team home base O’Brien’s Irish Pub on Wilshire Avenue in Santa Monica.

With multiple local news affiliate crews on site for the list-only Super Bowl party, it is well known that New York Giants fans would be readily available there, and New England Patriots fans would most likely not be.  Although there were other designated bars for the Patriots across Los Angeles, O’Brien’s was the Meetup.com official party for New York diehards.

Patron and Giants fan Larry Moody said of the event on Sunday, “This is not Santa Monica, California; it’s Santa Monica, New York!”  With people exchanging lineage ranging from Syracuse to Long Island and phone numbers beginning with (917) area codes, the event could have mimicked any bar on Super Bowl Sunday in New York City.

Psi U Think You Can Dance raises money for paralysis research

Psi U Think You Can Dance raises money for paralysis research