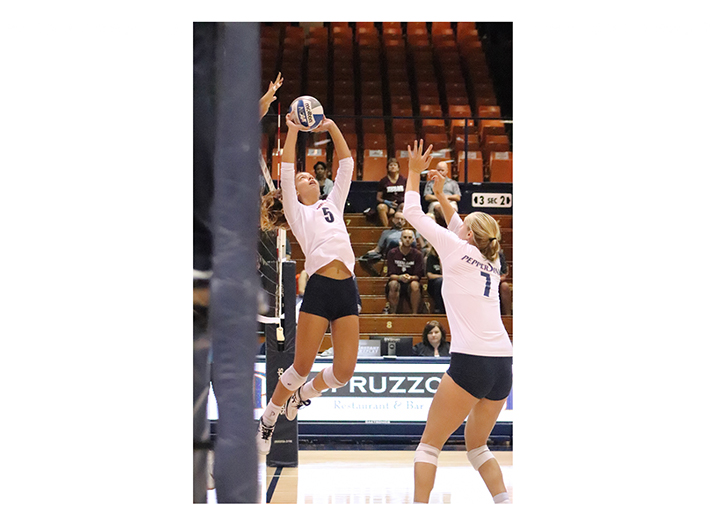 With two freshman setters, their leader temporarily sidelined by an injury and a freshman hitter starting every match, Pepperdine Women’s Volleyball had every excuse to falter in their home-opening tournament.

Despite slow starts in each match, the Waves refused to falter. They defeated California Baptist University and Fairfield University in their first two home matches of the 2019 season before battling and falling to Texas A&M in the Pepperdine Tournament finale.

“We’ve learned a ton just in these last two weeks that we’ve played,” Head Coach Scott Wong said. “We have a couple positions on the court that are a little young.”

One such position is setter, arguably the most important position on the court. Redshirt freshman transfer Tayah Mahi and true freshman Isabel Zelaya have both seen significant playing time at the position, with Mahi getting the majority of the action but Zelaya also entering in 12 of the 25 sets that the Waves have played thus far.

Additionally, senior outside hitter and 2018 All-WCC player Hannah Frohling has missed each of the team’s first six matches with a lower leg injury. Though Frohling is perhaps the team’s best player, true freshman Kayleigh Hames has helped fill the void.

“Having Hannah [Frohling] out was a big loss,” Hames said. “I had to fill in — I had to step up and take on a big role.” 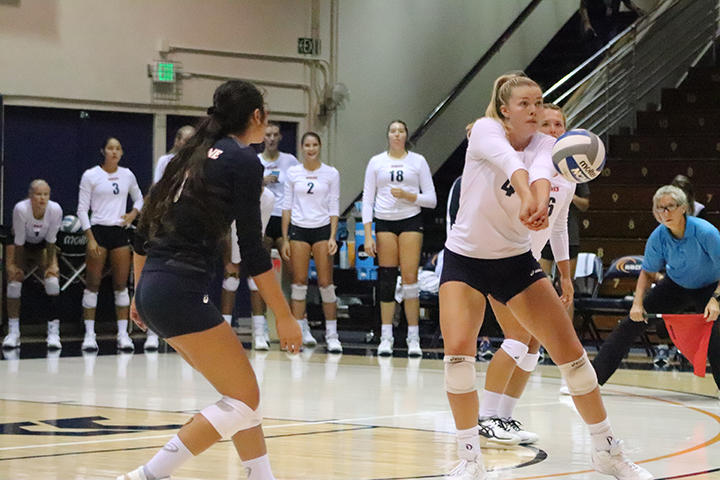 Hames passes the ball during Saturday’s match against Texas A&M.

Alongside the talented incoming freshmen is a strong cast of returners from the 2018 NCAA Tournament team. Before the season began, Pepperdine received votes to be ranked in the AVCA Coaches Poll. Despite Frohling’s temporary absence, Wong said to pump the brakes on the hype.

“We returned a lot of players, and I think the natural thing is people just think we’re going to smoke teams left and right,” Wong said. “We are getting better, but we’re not there yet. We’ve got a long way to go.”

After losing two five-set matches at the North Texas Challenge to open their season, the Waves needed to regroup. The team defeated Illinois State 3-1 in its final match in Texas on Aug. 31, then headed home to prepare for the Pepperdine Tournament at Firestone Fieldhouse.

“Week by week, we’re really trying to focus on getting better,” Wong said. “We didn’t like those two losses [in Texas], but I thought we learned a ton and grew a ton.”

The Waves started slow against then-winless Cal Baptist in the home opener, leading only 10-9 midway through the first set. From there, back-to-back blocks by the Pepperdine defense (each including sophomore hitter Rachel Ahrens) fired up the crowd and the team. 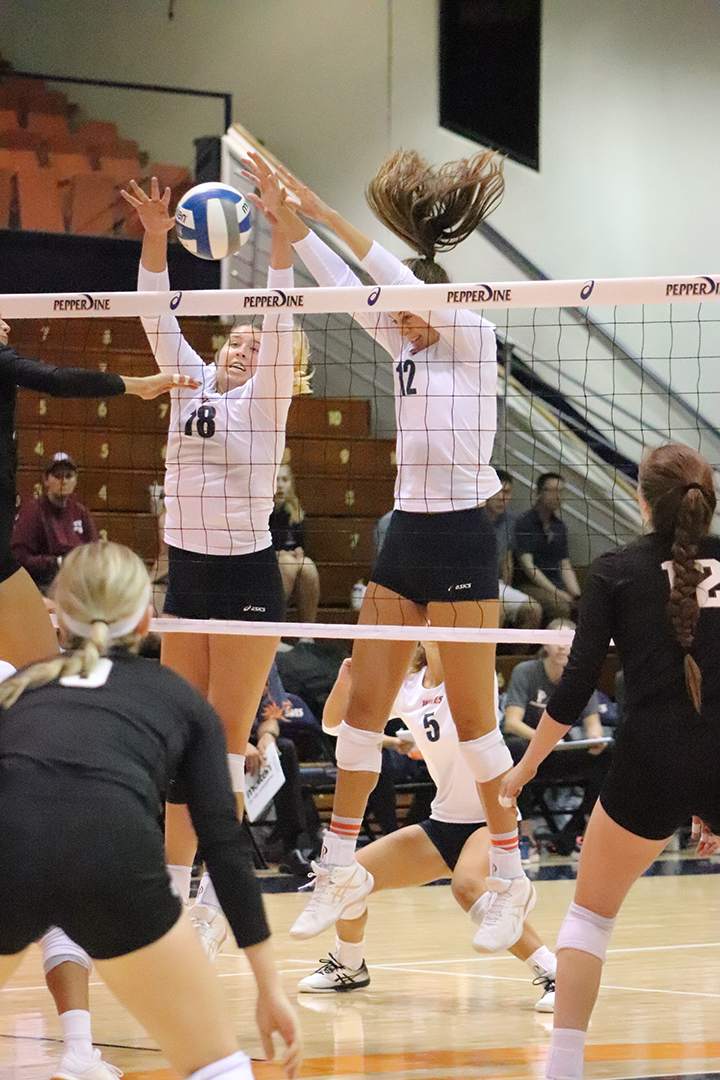 The crowd of students in the stands began to playfully heckle Cal Baptist players, and the Lancers never recovered.

Behind junior middle blocker Alli O’Harra‘s four kills in the set, Pepperdine closed the first set with a 25-21 win and they were on their way.

“Coming back here, it’s great to see [the] great big audience that we had,” O’Harra said. “It was really fun to play at home [and] get a win at home in three [sets].”

Cal Baptist hit only .094 in the first set and finished the match with a team hitting percentage of just .090.

In the second set, Hames caught fire for the Waves, putting down seven kills on only nine swings.

“It was totally different than anything I’ve ever really experienced,” Hames said of the atmosphere in her first collegiate home game. “It’s awesome.”

“It was so fun,” O’Harra said. “The crowd was awesome. [Setter] Tayah [Mahi] and I connected really well.” 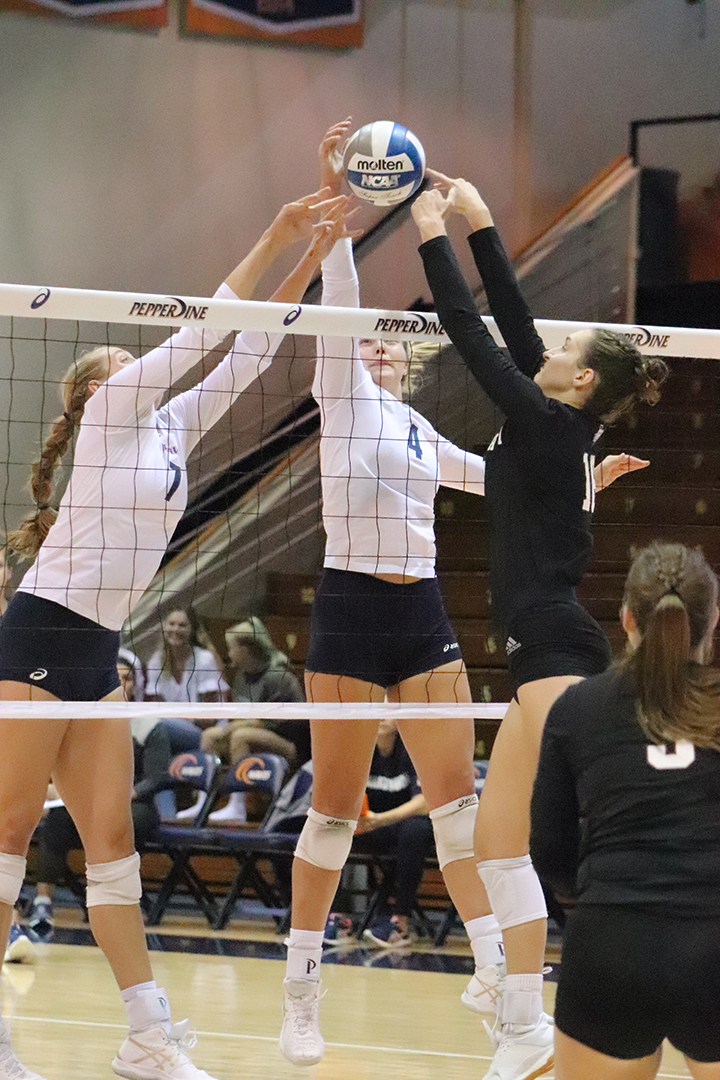 O’Harra and Hames joust a Texas A&M player at the net Saturday.

O’Harra and her teammates did not have much time to celebrate the home-opening win, as they were right back for another match in Firestone the following night.

“We all have a lot of improving to do,” O’Harra said. “The chemistry will become better and better the more the year goes on, and I’m excited for that.”

The Waves got off to another slow start Friday evening against Fairfield, a team who had not only traveled to Malibu all the way from Connecticut but had also lost to Cal Baptist in five sets in its tournament-opening match Friday morning.

“I think we just came out too relaxed,” Zelaya said. “We knew we were a better team, so we just kind of came out like, ‘Oh, we got this.’”

Midway through a sloppy set, Wong sent Zelaya into the match for Mahi. Zelaya would play for the remainder of the match.

“It was just a little bit of the energy on the court,” Wong said. “We needed to change, and I think [substituting setters is] probably the easiest change in terms of the difference of one player.”

In the second set, Pepperdine would lead wire-to-wire en route to a 25-22 set victory, though the Stags kept it close the whole way, with five ties.

“[In] the second set, we started picking it up,” Zelaya said. “We were like, ‘[Fairfield] is going to fight, so we need to fight back.'”

By the third set, the Waves finally found a rhythm. Led by Ahrens’ 15 kills on a .464 hitting percentage, four Waves smashed double-digit kills in the match, and Pepperdine dominated the final two sets, 25-12 and 25-13.

Saturday evening’s match was not only the unofficial championship game of the Pepperdine Tournament, as each team had beaten both Cal Baptist and Fairfield, but also a rematch of a 2018 match, in which the host Aggies swept the visiting Waves 3-0.

Texas A&M fired on all cylinders right out of the gate, hitting a sparkling .609 with a balanced attack.

Despite Wong challenging several of the referees’ calls, and the efforts of Ahrens and Pepperdine junior hitter Shannon Scully, the Aggies took the opening set 25-17.

“Our team executed at a high level, and they never really let stuff faze them,” Texas A&M Head Coach Laura Kuhn said. “In that environment, there’s challenges, there’s timeouts, there’s arguments happening, whatever it is — but they stayed composed, and that was the positive.”

The Aggies were relentless at the outset of the second set as well, leading 13-6 after a 5-0 run and thwarting each Pepperdine attempt to gain momentum.

At that point, Wong inserted Mahi, the setter who had transferred to Pepperdine from Northern Iowa this summer, into the match for Zelaya, who had been the starter in this match.

“I thought our offense wasn’t flowing,” Wong said. “There’s a lot of reasons behind that, but I think the setting was one thing that we could change.”

After hitting a lowly .109 in the second set (which A&M won 25-19), the Waves came to life in the third. Pepperdine flipped the script to win the third set 25-19, and Scully had a match-leading 17 kills by the end of the set. 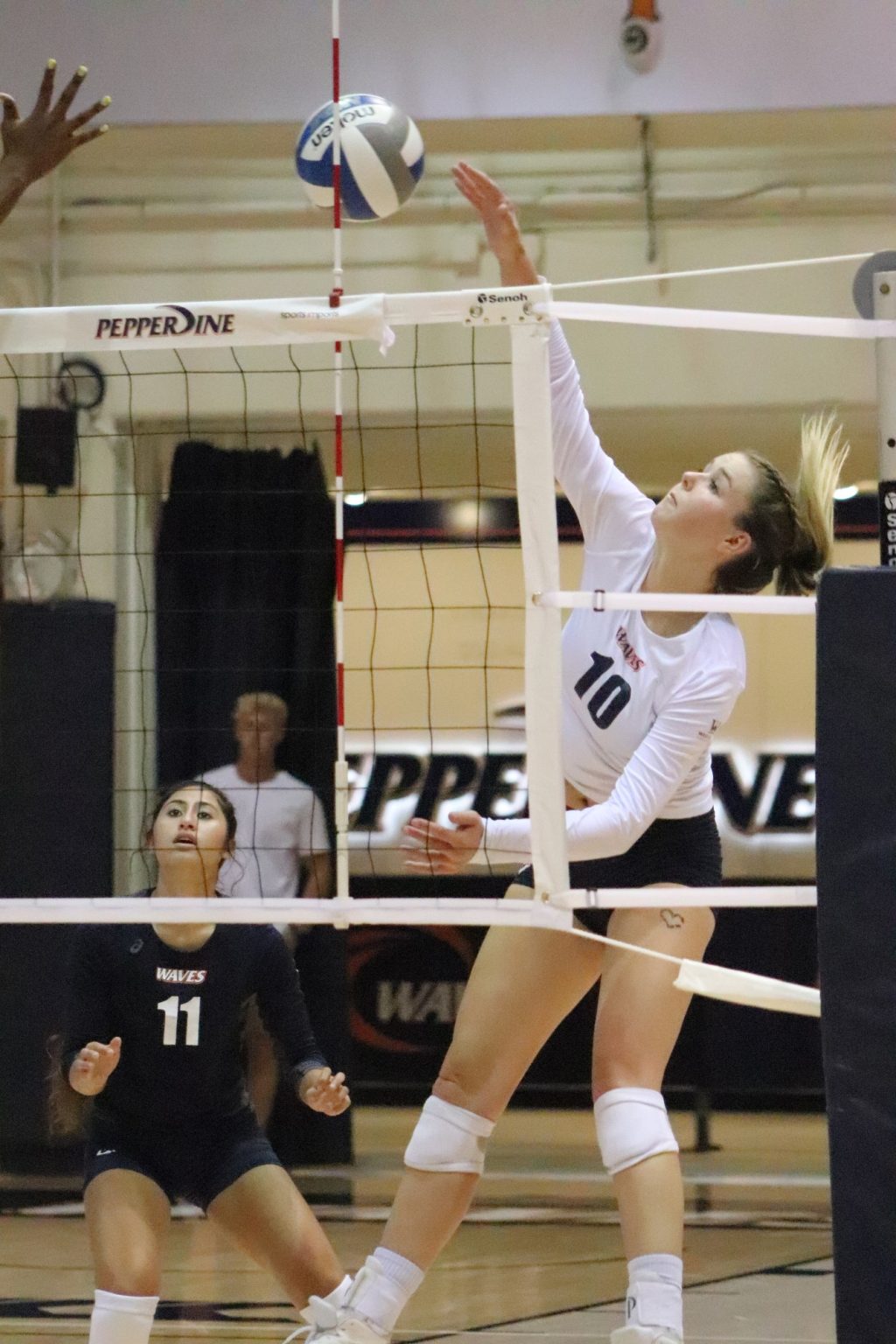 Scully takes a swing toward an A&M block attempt.

Unfortunately for the Waves, Kuhn’s team made the necessary adjustments, and Pepperdine could not replicate the magic of the third set. The Aggies hit .571 in the final frame to close out the match 25-15.

Wong credited Texas A&M as “a good team … that you can’t really prepare for.”

As his team continues to build chemistry this week during practice, Wong said they look ahead to the difficult slate of teams coming to Malibu for this weekend’s Pepperdine Asics Classic.

“It really prepares us for conference, playing good teams like this,” said redshirt senior middle blocker Tarah Wylie, who had six blocks against Texas A&M. “[Next] weekend, we have more competition that’s even better — it just pushes us and opens up to see what we need to work on in the gym and in practice.”

No. 6 Pittsburgh, No. 16 Utah and 2018 NCAA Tournament team Cal Poly will visit Firestone Fieldhouse on Friday and Saturday, Sept. 13 and 14.

“Personally, I’m really excited because I transferred from the University of Utah,” Scully said. “It’s really exciting for us just to see how much potential we have [at Pepperdine]. We know we can beat really good teams — we just need to start doing it, obviously.”

Ultimately, the Waves split their first six matches of the 2019 season, but with the anticipated return of Frohling expected soon, the team still has a lot ahead of them.

“We have some youth and we’re still growing a little bit, so we’re just figuring out our six [starters] and worrying about us,” Wylie said. “When we do that, we’re great.”