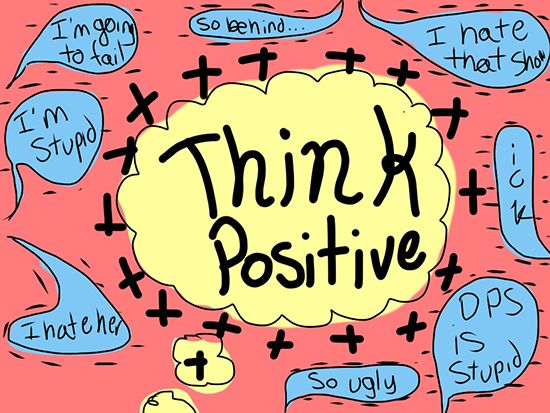 Last year I tried to give up second dessert for Lent. I am ashamed to admit that it was not even close to a successful attempt. This year, knowing that a chocolate fast was unlikely to last longer than a week, I decided to do something more meaningful: give up negativity.

At first my plan was to stop the negative self-talk: no more telling myself “you’re so socially awkward” after failed conversations with strangers, since it happens to the best of us; no more “wow, you have so little self-control, it’s pathetic” after the occasional second dessert (yes, it’s still a problem). After a while, though, I decided that embracing positivity required more than just nipping bouts of self-loathing in the bud. Instead, I decided to make myself more aware of every negative thought.

When I notice my mind heading down the wrong road, I try to replace that thought with something positive instead. When I became more aware of my negative thoughts, I realized that negativity is everywhere — from our tendency to adopt a defeatist attitude to our jokes with our friends, to our strictly guarded sense of pride. Sometimes we even wallow in sadness, anger and other negative emotions long after they’ve served their purpose,because in some strange, self-indulgent way, we like it.

Maybe this is human nature. Maybe this is a symptom of society. Maybe it’s a little bit of both. Either way, I know I’m not the only one who struggles with this. I don’t know why we are so drawn to negativity, but sometimes it seems like we feed off of it.

A lot of conversations these days turn into competitions to determine who is more jaded. It’s almost cool to be so burned by life that you can’t be bothered to care anymore. If you’re optimistic and try to think of a way to get a good outcome from a bad situation, well … you must just be naive.

To look cool and intelligent, we pretend that we’re “above” so many things. We put down book series, films or people who are popular to prove that we’re “better” than the rest. We make fun of DPS, because we claim they’re not doing their job the way we think it should be done — even though unless we’ve been DPS officers before, we have no idea what it’s actually like.

We have come to thrive on negativity to elevate ourselves. The problem with this is that negativity is self-perpetuating. When we put someone else down to elevate ourselves, all we succeed in doing is making that person feel worse about his or herself and, potentially, driving that person to seek out the same kind of negative behavior to make his or herself feel better. If we constantly complain about every little thing, we start looking for the bad in situations as a habit.

Why do we sometimes think that to be “adults,” we must be jaded, bitter and slaves to our own egos? The truth of the matter is, any negative act meant to preserve the self will have the opposite effect. Putting others down to feel superior not only hurts someone else, but in the end it makes us feel worse about ourselves, too, because we realize to what low levels we’ve stooped. Venting our frustrations is good — but only for a time. If we consistently complain about the same things, we don’t fix them, but rather live in the same old negative state of mind.

I encourage you to allow yourself to be imperfect and have dark moments to learn from the negative, but not to dwell there. Sometimes we don’t think to rebuild ourselves because we’re too stuck in the rubble.

While it’s impossible to get rid of negativity altogether, restructuring our thought process to lean toward the positive is still a healthy and worthwhile choice. Rather than making mean jokes or complaining about the Caf, homework, roommates, etc., for the umpteenth time, take a few moments and relive the good parts of your day. Write down what you’re thankful for. Make a positive observation to someone.

Instead of building up a wall around yourself and pushing others away with negativity, break down the barriers, be vulnerable and show love and kindness to everyone you encounter. Replacing negativity with positive thinking is not easy, nor is it ever truly accomplished. It is an ongoing process, but once you begin to make the effort, it will be worth it.

If your resolution to give up junk food for Lent hasn’t been working so well, maybe try my idea: Give up all that mental junk food and nourish your soul with positivity.

Equality is not exclusive 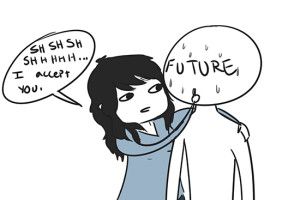 Art by Sacha IrickIt’s that time of year again. The flowers are in bloom, the weather fluctuates between nicely tropical...
Copyright 2018 Pepperdine Graphic
Back to top