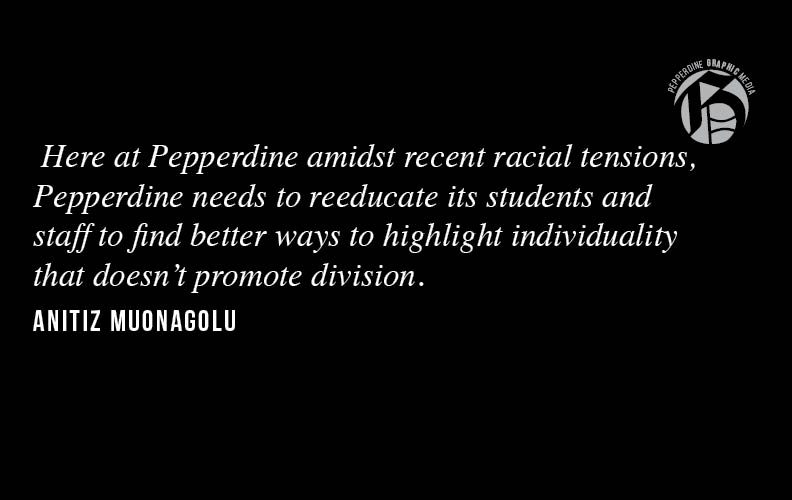 While America likes to fantasize itself as a melting pot that acknowledges different backgrounds, there are many ways people divide each other unnecessarily. This greatly affects how Americans view race, ethnicity and nationality. Here at Pepperdine amidst recent racial tensions, Pepperdine needs to reeducate its students and staff to find better ways to highlight individuality that doesn’t promote division.

A person’s nationality is typically defined as the nation or country of origin. For instance, being born in America makes one American or being born in Nigeria makes one Nigerian. Race and ethnicity on the other hand can be quite complex.

It is true that both race and ethnicity can be intertwined but they are very different concepts. Ethnicity, is “more broadly defined as ‘large groups of people classed according to common racial, national, tribal, religious, linguistic, or cultural origin or background,'” as defined by National Geographic.

Ethnicity typically gets confused with nationality because at its core there is an assumption that someone’s geographical location will match with their chosen culture. For example, if someone was born in Nigeria, their nationality would be Nigerian since that is their nation of origin; however, their ethnicity could vary from African, which is very broad, to a specific ethnic group such as Igbo, a native ethnic group in Nigeria.

Race is the most superficial and the trickiest to define out of these three. Race “is usually associated with biology and linked with physical characteristics,” as defined by National Geographic. This can include facial features, skin color and even someone’s hair texture.

The notion of race is what also leads to confusion on understanding nationality and ethnicity. Many aspects of identifying race are in some ways biased and subjective. Common races the United States and western society use are Black, White, Pacific Islander, Asian, biracial and American Indian/Alaska Native. This is commonly seen in the U.S Census.

Race and ethnicity are very similar in the aspect that they both require self-identification. In regards to race, someone could look at a man and perceive him as White and be completely unaware that he may have been born from a mom who would be identified as Black. This need for self identification can create a whole palate of confusion for people.

This subjective and physical way of identification not only creates confusion but division. The biggest example is the concept and continuation of racism. Historically, when people were oppressed it was mainly on the basis of race.

As explained by David Freund, who is a professor at the University of Maryland, race has been historically used to discriminate and disproportionate wealth. For instance, the prosecution of Jews in the Holocaust. At the time they were identified as a race of people despite currently being considered an ethnicity.

Race and ethnicity are both socially constructed ways of identification which now do more harm than good in this day of age, especially when we incorporate it with mandatory steps of our lives. This can include official tests such as the SAT, applications for government documents such as a drivers license and even applying for college.

Nationality has a concrete definition and leaves less room for discrimination. For instance if American society just thought of its citizens as Americans instead of Black American vs White American, racism could be a scarcity.

In this society, future generations need to recognize that race shouldn’t be the defining quality of a person. Furthermore, society’s current and future generations need to change how race heavily affects their society and politics. This could be done by protesting and advocating for documents that require you to identify your race and ethnicity to include those items to not do so.

In the Pepperdine community, students and staff should practice people-first language and prioritize what people are instead of vane aspects of who they are.

This world is filled with so many unique and wonderful people and have different ethnic origins and physical features are amazing to acknowledge and celebrate. However, it’s better to look at those special traits and differences everyone has and use it to come together because that’s what a community does. 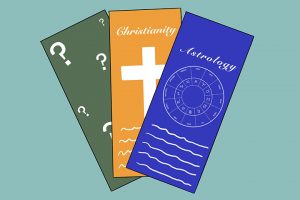 Art by Caitlin RoarkWhere some see religion, others may see exclusion, fear and even collapse. While religion is subjective,...
Copyright 2013 Jupiter Premium Magazine Theme
Back to top