Mitt and the Moochers 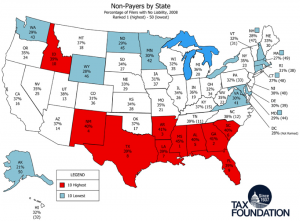 A graph of non-payers by state. Eight of the ten states with the highest concentration are red states, i.e. Republican-leaning states. Source: The Tax Foundation (http://taxfoundation.org/)

This May, at a private, $50,000-a-plate fundraiser in Boca Raton, Mitt Romney stood before a room full of his most important constituents: rich people. At home in his natural element with the Americans he most identifies with, Mr. Romney let his guard down, and for the first time in his long career of running-for-president, he spoke honestly.

If you haven’t seen the secret tape from this May fundraiser (Mother Jones broke the story last week.) then you’ve surely heard about it, because it’s been the talk of the national media since it emerged. Most of the public ire revolves around a comment Mr. Romney makes during the hour-long video about a certain 47 percent of Americans:

“There are 47 percent of the people who will vote for the president no matter what. All right, there are 47 percent who are with him, who are dependent upon government, who believe that they are victims, who believe that government has a responsibility to care for them, who believe that they are entitled to health care, to food, to housing, to you name it. That that’s an entitlement. And the government should give it to them. And they will vote for this president no matter what… These are people who pay no income tax. Forty-seven percent of Americans pay no income tax. So our message of low taxes doesn’t connect. And he’ll be out there talking about tax cuts for the rich. I mean that’s what they sell every four years. And so my job is not to worry about those people—I’ll never convince them that they should take personal responsibility and care for their lives.” 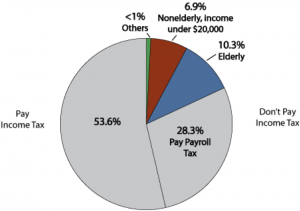 A graph breaking down the 47 percent of Americans who pay no income tax. Source: The Tax Policy Center (http://www.taxpolicycenter.org)

How can this candidate possibly expect to win the presidency when he shows such open disdain for nearly half of the population? The remark reveals a lot about Mr. Romney’s character, and for many this tape confirmed the negative perception of Mitt Romney as a heartless plutocrat, an image he desperately tried to shirk off during the GOP convention, which tried (and largely failed, according to the polls) to humanize him.

That’s the criteria here, and it reflects a very popular line in conservative thinking, that Americans who pay little or no income tax are moochers, welfare queens, parasites — often enough you’ll hear conservative thinkers or talk show hosts equate paying no income tax to paying no taxes whatsoever, which isn’t only factually untrue (AKA, a lie), it’s actually quite a spiteful thing to say.

While it is true that 47 percent of Americans do not pay federal income taxes, they still pay payroll taxes, sales taxes, and state and local taxes. They aren’t moochers or welfare queens.

In fact, what’s doubly problematic for Mitt Romney is that this same 47 percent of Americans who don’t pay income taxes are also his most likely supporters.

Here is a quick breakdown of the 47 percent of Americans who pay no federal income tax:

These are the people Mitt Romney accuses of having no “personal responsibility and care for their lives.”

They are also, ironically, the people most likely to vote for him. 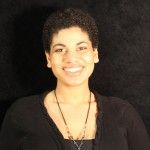 Apolitical is a blog that covers current events, politics and culture from a progressive perspective. We’re bringing the world at large to the Malibubble, one post at a time.

All the small things: Imagine a world...

With the new school year off to a busy start, students are given numerous opportunities to become involved in diverse clubs...
Copyright 2013 Jupiter Premium Magazine Theme
Back to top