Men's tennis falls in a close match to No. 1 ranked USC 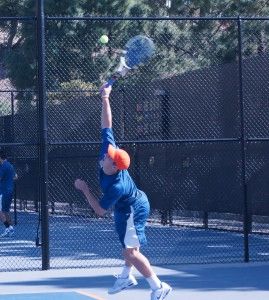 In one of the most anticipated matches at home this season, lots of fans arrived at Ralphs-Straus Tennis Center to cheer on the men’s tennis team as they continued their ITA kick-off weekend and faced defending NCAA Champions, the USC Trojans. The Waves put up a great fight against No. 1 raked USC. Unfortunately, they were unable to recover from a solid start in the doubles match, and ended up ultimately losing 6-1.

It was a long and exhausting hour and a half battle for the doubles point. Senior Hugh Clarke and his partner sophomore David Sofaer managed to pull off the first victory for the Waves and defeated Emilio Gomez and Roberto Quiroz 8-2. It didn’t take long for the Trojans to respond and come back with an 8-2 victory on the second court.

The final match and tie-breaker took place in court one as junior Finn Tearney and partner, senior Alex Llompart, battled it out against Steve Johnson and Yannick Hanfmann. It was a very close match, even though the Trojans managed to start off with a lead 5-2 and appeared to be in control of the match. But Tearney and Llompart broke serve to come back within one game at 6-5. With Tearney on serve, the Wave duo held to tie the match at 6-all.

As neither team was able to earn a distinct advantage over the other, it came down to a tiebreaker to determine the winner. In the end Johnson and Hanfmann pulled through with a 7-1 victory to give the Trojans the opening advantage heading into singles.

With this advantage, the Trojans were able to ride on the momentum and take on the Waves in six single contests. Steve Johnson defeated junior Sebastian Fanselow 6-3 and 6-2. Things were looking good on court number six, as senior Jenson Turner fought for the waves against Roberto Quiroz. Unfortunately, he was edged out in the very end and lost 6-4 and 6-4.

Junior Finn Tearney obtained the only singles victory for Pepperdine, topping No. 16-ranked Daniel Nguyen, 6-3, 7-6. The results came down to an overall 6-1 loss to USC. The challenge carries on as the Waves continue their tough schedule next week, when they face No. 88 UCLA at the Los Angeles Tennis Center on Tuesday, February 14.