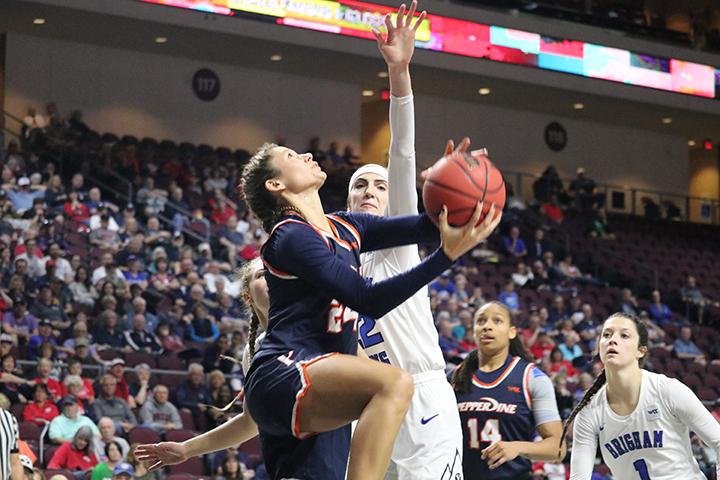 Guard Hannah Friend (No. 24) drives for the reverse layup against Brigham Young during the West Coast Conference tournament.

The Pepperdine Men’s and Women’s Basketball teams each had a strong showing in the West Coast Conference (WCC) tournament at the Orleans Arena in Las Vegas, which took place March 5–10. The women’s team won two games to reach the conference semifinals for the second consecutive year, while the men pushed third-seed Saint Mary’s to the brink in a quarterfinal overtime loss that was nationally recognized as an instant classic.

“The WCC does a great job of how they run the tournament,” Dowling said. “And to have the whole Pepperdine cohort, the cheer[leaders], President Gash being there … it was a great experience, and I’m very grateful our players got it.”

Men’s Basketball redshirt senior forward Kameron Edwards has now been to five WCC tournaments, so he said he knows the importance and opportunity that going to Vegas brings.

“It feels like a clean slate,” Edwards said. “No matter what happened in conference, anything can happen in Vegas.”

Last year’s men’s team proved the “anything can happen” notion, winning three games in three days, including against two higher-seeded opponents, on a run to the semifinals, while the women’s team also made the semis as part of the most successful season in team history.

This year, both men’s and women’s teams finished sixth out of 10 in the regular season standings. Due to the WCC’s unique tournament structure, they both earned a bye on Thursday, March 5 and began play in the second round Friday, March 6.

The women’s team got the weekend off to a good start, as the sixth-seeded Waves topped the seventh-seeded Saint Mary’s Gaels 87–72. Hannah Friend filled up the box score with 26 points, five rebounds, four steals, two assists and two blocks.

Later that evening, the men’s team, also seeded sixth, took on the seventh-seeded Santa Clara Broncos and came away with an 84–73 victory. The Waves were up 18–3 after six minutes, led by as many as 21, and were never truly threatened.

“They had played the night before, so we knew they would be feeling some type of fatigue,” Edwards said. “We wanted to come out early and be aggressive.”

Edwards led the charge with 21 points and 16 rebounds, while junior guard Colbey Ross flirted with a triple-double, notching 18 points, eight rebounds and eight assists. Among those points was his 600th of the season, making it the second consecutive year that Ross has had a 600-point, 100-rebound, 100-assist season. Ross is the only WCC player to accomplish the feat in the past 20 years. 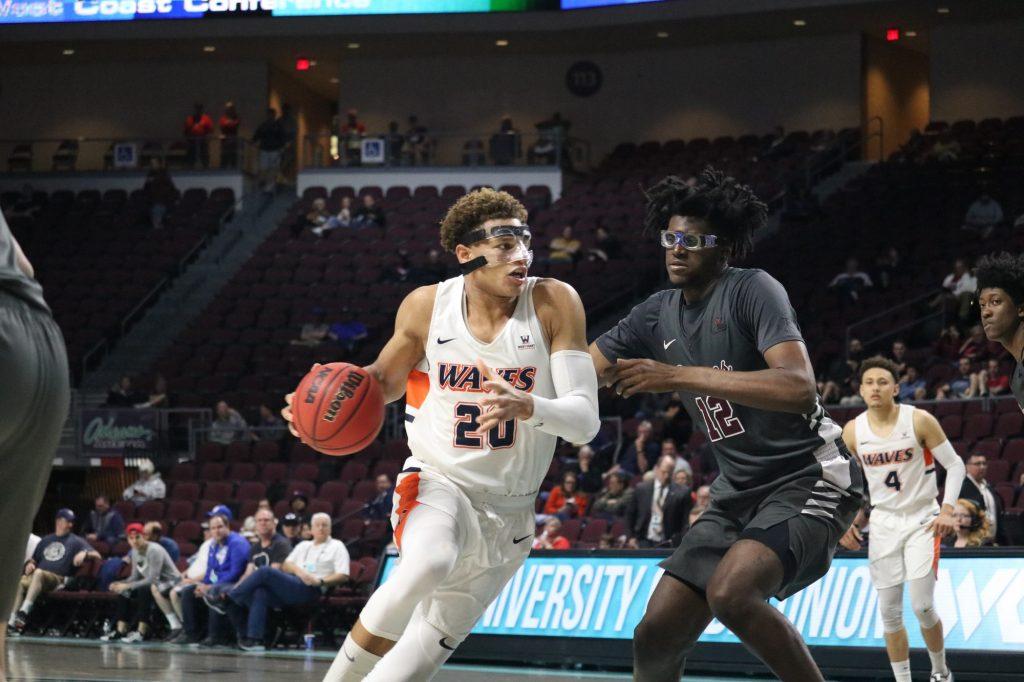 Senior forward Kameron Edwards (No. 20) looks to score against Santa Clara in the second round.

Both teams advanced to the quarterfinals but found themselves underdogs against third-seeded opponents.

The women got a statement victory against Brigham Young on Saturday afternoon, defeating the Cougars 62–51 and avenging two regular-season losses. Friend led the Waves again with 15 points, while senior guard Barbara Sitanggan had 13 points, eight rebounds and four assists.

Despite facing a BYU roster that featured 6-foot-7 center Sara Hamson, the Waves out-rebounded the Cougars 43 to 33. The 51 points was a season-low for a Pepperdine opponent.

The men faced off against Saint Mary’s in the final game of the night. Pepperdine erased a nine-point halftime deficit to force two overtimes, but the Gaels pulled away in the second extra period and eventually won 89–82.

The night was defined by the scoring duel between Ross and Gaels senior guard Jordan Ford. Ross scored a career-high 43, including seven three-pointers and two clutch free throws with nine seconds left to send the game to the first overtime. Ford had 42, including a circus three-pointer in the second overtime that effectively iced the game for the Gaels.

Only San Francisco’s Tim Owens, with 45 points in 1991, has scored more in a single game in WCC tournament history, meaning that the second and third-highest scoring performances improbably occurred in the same game.

“In the moment, you’re not thinking about what’s going on — you’re just trying to get the edge and win the game,” Edwards said. “But right after the buzzer sounded, and people were cheering and everybody was standing up, I thought, ‘Oh man, I bet the people watching were in for a treat tonight.’”

Ross was named to the All-Tournament team, joining Ford and three players from No. 2 Gonzaga, who took home the title. 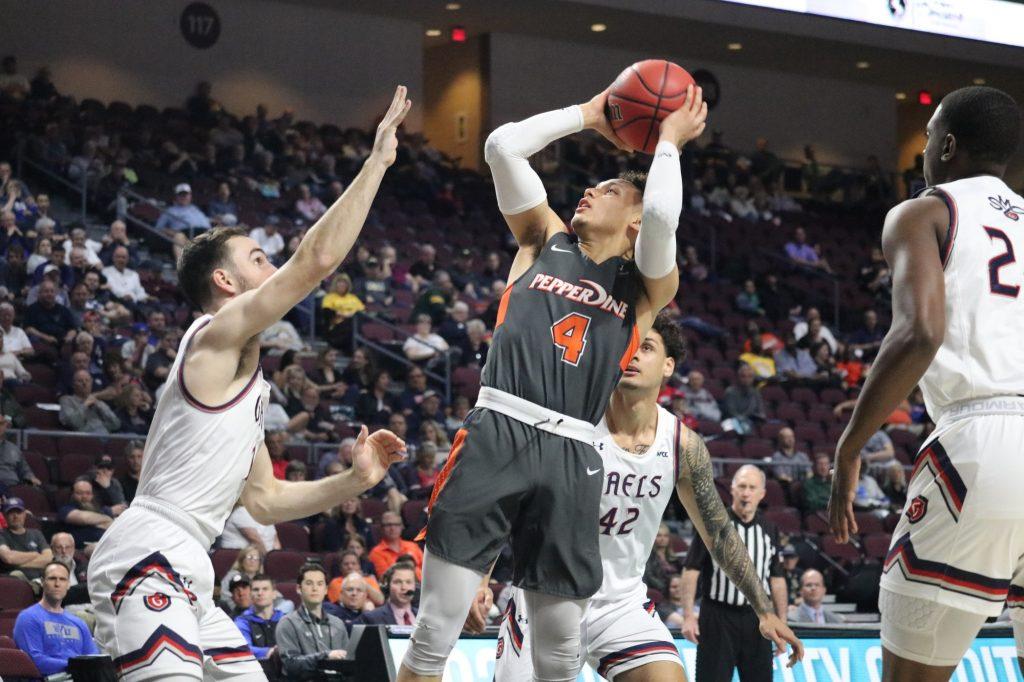 Colbey Ross (No. 4) and Saint Mary's Jordan Ford (not pictured) set the second-highest and third-highest scoring performances in tournament history in the same game.

The women’s run came to an end in the semifinals when they ran into a talented and well-rested San Diego team. The second-seeded Toreros defeated the Waves 59–44.

Dowling gave credit to San Diego but believes fatigue played a role in her team’s play.

“They had fresh legs,” Dowling said. “It was our third game in four days, so our kids didn’t have as strong of legs. San Diego is a very defensive-oriented team, so we had a hard time getting open looks, and the shots that were there, we didn’t knock down.”

For the third straight game, Hannah Friend led the Waves in scoring with 15 points. Friend was named to the All-Tournament team and was the only player on that team not from a school that made the championship game, something Dowling said “really speaks to how well Hannah did.”

While players and coaches said they enjoy the conference tournament experience, it was more significant this year since many conference tournaments, along with all NCAA and professional sports competitions, were canceled due to the COVID-19 pandemic. While the Waves were able to complete the WCC tournament, they still lost out on some games.

The men’s team was on the verge of accepting an invitation to the College Basketball Invitational (CBI) and what would have been their first postseason tournament since 2016. The women’s team would have found out if they were included in the women’s version of the tournament, the WBI, on March 15. Both tournaments were canceled.

Given the recent events within the Pepperdine community, Dowling said she was “very proud” of her team.

“This group has been through a lot,” Dowling said. “The coronavirus, the [Borderline] Shooting, the [Woolsey] Fire, a head coaching change. What our team did in the tournament was a testament to their resilience.”

“We were playing our best basketball at the end,” Dowling continued. “That’s what you want. I was grateful we went out on a high note.”

Biden's Commitment to a Female VP Should Not Be Insulting 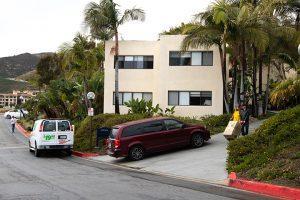 Cars line the street as freshmen scramble to move out of their dorms on Friday, March 13. Pepperdine administration sent...
Copyright 2013 Jupiter Premium Magazine Theme
Back to top