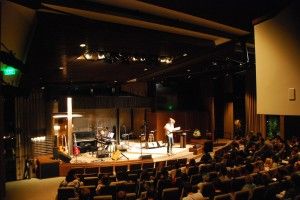 Sunday marked the first time Malibu Presbyterian met in its newly constructed building after the old building was destroyed six years ago in the Malibu Canyon wildfire. More than 500 people attended the services Sunday in the new building.

Services were held in the familiar onion-shaped building on Malibu Canyon Road while money was being raised and construction on the new building took place on the property behind where the temporary structure was set up.

Despite the temporary structure, the church continued to minister to the Malibu community and to Pepperdine students specifically with University Ministries (UM), their weekly outreach. On Tuesday, UM launched their first night in the building.

The church’s insurance policy that covered all of the expenses for construction of the new building. The new Malibu Presbyterian building is over 17,000 square feet and includes both a sanctuary and a preschool.

Taking advantage of the opportunity to start anew, the church now has improved sound equipment and acoustics to produce a fuller and richer sound.

“The new building improves the worship experience; it was built with acoustics in mind,” said Pepperdine junior Thomas Yee, who is involved with the UM worship team.

The new building also includes amphitheater-style seating that is better able to accommodate the entire congregation, downstairs fellowship rooms for use by the church and fire resistant materials used to prevent a similar situation from arising in the future.

Malibu Canyon commuters will soon miss the white inflatable-looking structure that has been up for more than three years.

Worship has resumed in the new building, and the temporary structure will be demolished soon to make room for construction on a new administrative building that will replace the current system of temporary buildings and trailers that have served as offices after the fire.

“In the end, all of this is really not about a building,” Tim Jones, Malibu Presbyterian’s director of outreach and communications, wrote in an email. “We are excited about how God has sustained our lives, has promised to walk with us and that his mission, love and hope for his church do not depend on temporary things (like buildings), but on his Spirit moving through his people.

“More than ever, we are passionate about allowing his Spirit to reveal his Kingdom to our community,” Jones wrote. “And we will continue to do this through teaching, worship, community groups and mission trips reaching our city to Mexico and around the world.”

You would not expect the mountain resort town of Park City, Utah, to be the location of a world-renowned film festival...
Copyright 2013 Jupiter Premium Magazine Theme
Back to top