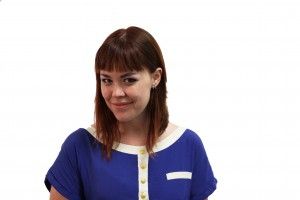 Making friends and using my words: both are separate elementary-school concepts that, at firstseem to require common sense rather than courage. But that’s where you’re wrong, dear reader. This is my third column; I feel like I can call you that now. As a senior, it’s especially difficult to venture into making new friends at Pepperdine. I have that wonderful level of comfort with the friends I already have, where I can be as ridiculous and strange as I like and know they already accept me. (Hear that, current friends? You’re trapped). But to step out of that protected zone and pursue new friendships, I have to try to remember how to act like a normal, socially acceptable person and limit my level of awkward. An example as to why that could be tricky for me:

This summer, walking back to my table in a restaurant, I spied a cute waiter. He was walking by — the way cute waiters do — and I was walking towards him and smiling when BAM! No, that wasn’t the sound of romantic fireworks going off. It was the sound of me walking into a wall. Devastatingly smooth as ever.

Then there’s the wooing period, which doesn’t involve flowers or a dowry, but instead small-talk and jokes. As you gradually get to know the person, you gauge whether or not your interest is returned. Oh, they want to be friends. They’re smitten. Then there’s the ask-out moment of vulnerability: “Dude, we should hang out some time.”

This can be a surprisingly scary sentence to say.

I’ve also been working on using my words to give voice to things I usually don’t say, things easier avoided and nudged away. I’ve come to believe, however, things that make us initially uncomfortable are often the ones most in need of examination. Reach under the rug, pull out whatever is for you, and flood it with the full light of day.

So here are a few sentences of joking aside earnestness. Writing something stark and true instead of humor-centered serves as my 10 seconds this week. While I love Pepperdine and can’t imagine going to school anywhere else, I didn’t always feel that way here. I didn’t always feel like I belonged or like I was wanted. I hit a lot of brick walls, had a good amount of disappointment, spent some time being lonely and worked my hardest to glue a smile on. With the overwhelming beauty of the campus, grinning students and constant sunshine, Pepperdine is a lousy place to be unhappy.

So if any of you are inspired to make new friends, seek out the people who could really use it. The 10 seconds it would take to sit down with someone eating alone in the Caf would be beautifully spent. Or use your words to talk about something you usually don’t — I promise you’ll feel freer.

Meet this year’s PIT improv masters, and guess what makes them tick

Meet this year’s PIT improv masters, and guess what makes them tick

The Pepperdine Improv Troupe, known as PIT, has been running at Pepperdine for 13 years and is known...
Copyright 2013 Jupiter Premium Magazine Theme
Back to top