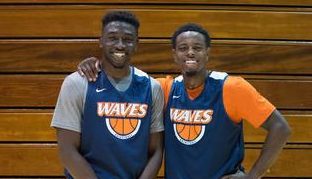 Stereotypically, people think of younger basketball players as having one thing on their mind: scoring. How often do you see high school and college point guards try to pull a Russell Westbrook and carry the entire team on his back? Usually, it doesn’t work because 99.999 percent of point guards aren’t Russell Westbrook. So it’s refreshing to hear that Pepperdine’s two senior point guards, Jeremy Major and Amadi Udenyi, are passionate about their pass-first roles.

Udenyi said he’s always felt the urge to give up the rock, and this habit landed him in some hot water with his mother while growing up in Oakland.

“As a kid, I remember my mom was mad that I had a wide-open layup, and I didn’t take it, and I passed it to my friend instead so he could score because he hadn’t scored all game,” Udenyi said. “I’ve just been a pass-first type of guy since I was a kid.”

Udenyi described himself as being born with a basketball in hand, so it makes sense that he’d have these vivid early memories of playing. Although Major mentioned that his first sports love as a child in Pasadena wasn’t hoops (“I think I actually played t-ball before I even touched a basketball,” he said with a chuckle), he said that by this point in his career, he’s all about giving opportunities to his teammates rather than stealing the spotlight.

“I’m an unselfish guy, so I enjoy giving the ball up and seeing my other teammates score,” Major said. “It’s the part of the game that I enjoy the most.”

“The way he dribbles, the way his eye deception, his detail — his passes are always on time and on target,” Major said. “The way he carries his team, in terms of being a true point guard, is huge.”

Meanwhile, despite Udenyi remarking he didn’t try to emulate any NBA player’s methods specifically, he did mention he took inspiration from Damian Lillard, the perennially-underrated PG for the Portland Trail Blazers. Udenyi and Lillard’s families know each other — both hail from the East Bay — and Udenyi said Lillard gave him some advice on how to help lead this Waves squad.

“He always used to say, ‘work hard, continue to try to build a winning culture at Pepperdine and success will come with that,'” Udenyi said.

As mentioned earlier, both Udenyi and Major are seniors, and since they both play point guard — a position that lends itself to leading a team’s offensive strategy on the court — both players have taken it upon themselves to teach the seven freshmen how to truly contribute as a part of Head Coach Marty Wilson’s team. Major said he has a very specific rule that helps him teach the young’uns how it’s done.

“[I have to come] every day to practice, treating it the same way as I treat anything else, treating every day the same way. Even the days you may not want to be there, as a senior and a leader, you can’t show that,” Major said. “You gotta go ahead and keep the same look on your face. You’re pretty much checking into your job, man, so have fun at work.”

Udenyi said that although Major and him have different styles of leadership, their contrasting methods help to reach every player on the team.

“Now we have two ways of leading: Jeremy’s a more energetic, loud, goofy guy and I’m more serious, so [it’s] just the balance that me and him both have,” Udenyi said. “If I go yell at a player, and he doesn’t take that the right way, Jeremy can go and know how to talk to them. Knowing how to reach each player on our team, that gives us a huge advantage.”

Granted, both of these players have the potential to have stellar seasons in their own right: Udenyi has a shot at reaching the Waves’ all-time top-10 assist leaders according to Pepperdine Athletics’ website (and that’s with missing chunks of his first two years with injuries), while Major might wind up topping that whole list. When asked about the potential to break the record, Major emphatically said he didn’t even think about it.

“I just kind of play. Even when I got here my freshman year, I didn’t have any idea of breaking records, or anything like that,” Major said. “I kinda just came in, and Coach Wilson expected a lot from me, and I just wanted to go out there and play freely.”

As for the duo’s expectations for the whole team, both seem to be optimistic for the Waves’ future, at least in terms of the team’s chemistry.

“This year has been our best chemistry. On the court, throughout my four years, we’ve had some good chemistry, but this year is really gelling off the court,” Udenyi said.

“The vibes that are coming every day at practice, I haven’t felt since I’ve been here. We come every day, and we’re ready to battle,” Major said. “It gets pretty heated sometimes out there, and that’s what makes the atmosphere so much better We’re so competitive.”