Looking Back — A Year in Review with Gash 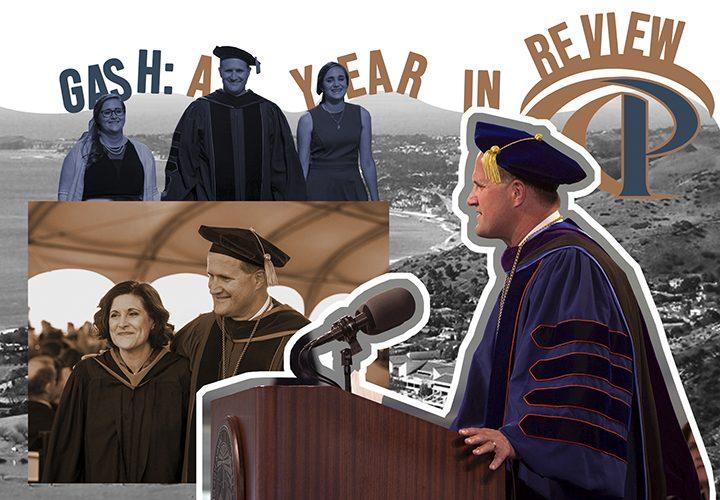 On Aug. 6, 2020, one year later, I asked Gash what he had learned throughout his first atypical year of presidency. Gash responded by showing me the empty Malibu campus through his laptop webcam and said, “Campus is really, really lonely without students.”

Since March 2019, when the Presidential search committee finalized its decision and named Gash as Pepperdine’s eighth president, he has hit the ground running with big dreams and bold plans for the University. Though much of the past year was unpredictable and unprecedented, he continues to look forward and execute many of his original plans with hopes to help create a better Pepperdine.

Gash created three pillars of emphasis during his initial speech as President-elect: faith, fundraising and footprints.

“That goal of making faith a centerpiece is something that hasn’t wavered and won’t waver,” Gash said.

Faith, Gash said, is a foundational part of his life. It is the reason he is at Pepperdine and continues to be involved in higher education at “an institution that helps grow and instill faith in students,” he said.

Over the past year, Gash spoke at various convocation and celebration chapel events, hosted prayer events, chose Hillsong to perform at his inauguration and said he continues to put prayer at the forefront. He and DeWalt continue to kneel for prayer every morning, facing the Pacific Ocean between the cross on the Phillip Theme Tower, the cross on the chapel and the cross on the hill overlooking classes — and each President’s Briefing opens in prayer.

Fundraising, while second on his list but not in his priorities, Gash said, is about acquiring the resources needed.

“We need the opportunity to build the kind of institution we want, and that really starts with students,” Gash said about creating more scholarships.

In his first 100 days of presidency, Gash toured the country, connecting with alumni and donors, asking them to continue investing in Pepperdine and its mission through giving. His fundraising campaign met almost all of its goals, falling just short of a second gift of $10 million by a single donor. Although the campaign ended early in March at seven-and-a-half months when classes transitioned to online, the administration reached its goal of raising the most money in the history of Pepperdine during a single year.

“That’s part of the job of a president and advancement team — to tell the story of who we are and what’s important to us to inspire people who are fellow travelers to say, ‘You know what? I want to make that possible,’” he said.

Increasing the University’s footprint is more than just getting Pepperdine feet in every state and on every continent.

During his first year, the administration finalized the purchase of the new Swiss chateau in Vevay, Pepperdine became the first school to partner formally with International Justice Mission, and plans to expand International Programs into the “developing world” are continuing, Gash said.

He noted Pepperdine International Programs don’t have a permanent presence in Africa or South East Asia and those regions are “high on the list of places to consider,” but a new program remains a dream for now.

“Right now, it’s more of an idea and a conceptual hope, but it’s not imminent,” Gash said.

Among his plans to continue bettering Pepperdine through students and education, Gash said he’s looking to build some more structural changes as well.

The Mountain, a proposed student recreation and event center, is set to be built on the Rho parking lot near student housing. Gash said this plan is a few years out, meaning current students probably won’t get to enjoy their adventure in The Mountain during undergrad, but changes will be made in the meantime to accommodate the new building.

“If you take away the parking spaces from Rho parking lot, we’ve got a real problem,” Gash said jokingly. “We’ve already got parking challenges on campus. […] We want to get rid of our parking problems once and for all at Pepperdine.”

A new parking area is underway behind the baseball field, Gash said, and while not having students on campus is not ideal for learning, it provides more opportunity for construction work to continue.

A new fitness center received approval recently and will be built next Seaside Residence Hall. Construction around campus has been delayed due to COVID-19 and the fitness center was originally supposed to be finished soon, but the project will begin shortly, Gash said.

Last year’s theme was “Together,” and for academic year 2020–21, Pepperdine is emphasizing the idea of belonging.

“Our desire as an institution is to form a place where everyone belongs — […] to feel like you belong to something bigger than yourself,” Gash said. “And that’s not just international — it’s local as well, and it’s community inside of Pepperdine.”

With a remote fall semester, there will be new challenges with creating a sense of belonging among students, especially for first-year and transfer students.

On Aug. 7, Gov. Gavin Newsom and the California Department of Public Health provided restrictions and regulations for higher education that, at present, limit Pepperdine’s ability to provide in-person instruction.

During the Presidential Selection Process in March 2019, the Freedom Wall bore the images of the past seven presidents and the five hopeful candidates, highlighting the lack of diversity in Pepperdine’s leadership. All of Pepperdine’s presidents were white men, and only one white woman was selected as a final candidate among four white men.

The Freedom Wall sparked a conversation about race and diversity at Pepperdine, and in response, Gash told the Graphic that diversity will be “very important” to him during his presidency and he wanted to create a diverse team to surround himself with. Gash said he stands by those remarks today.

“There’s a lot of different roles that our president has, and chief among them is listening,” Gash said.

In response to the conversations held with different Pepperdine community members throughout his national tour, Gash created his “Steering Team” of 21 leaders — the five different school deans and other leaders on campus who help advise his decision making.

While the official announcement for the creation of a Chief Diversity Officer (CDO) came after the murder of George Floyd and the revival of the Black Lives Matter social movement, Gash traces his hopes for the position to his pre-presidential days.

“Before I became president, one of the things that I had wondered about was why Pepperdine did not have a Chief Diversity Officer,” Gash said.

He spoke with then-President Andrew K. Benton and his administration about why Pepperdine had yet to create this role and was met with encouragement from all parties. The issue, Gash said, lay within defining the role and job description, as there were various models used by other similar universities. COVID-19 derailed the process of finalizing a job description for a new Chief Diversity Officer as the administration needed to shift gears to address the growing pandemic.

Now the focus has readjusted back onto filling the role of a Chief Diversity Officer, and two committees have been created to finalize the job description and begin the search for Pepperdine’s first CDO.

During his first year, Gash has seen his fair share of controversy, especially in the area of race and diversity. Students expressed frustration and disappointment toward Pepperdine, whether it be a lackluster response from the University in acknowledging Black Lives Matter or a repeated quip from Gash himself about his pending dual-citizenship in Uganda and the United States making him “African American.”

In response, Gash shared his passion for getting to know people and inviting them into conversation, as he believes in solving controversy with a relational focus. In his first 100 days, he had 100 meals with 100 faculty members, he met with each of the members for the Board of Regents and he hosted diversity dinners at Brock House with student leaders to listen to their stories and answer their questions.

“It’s about building relationships so that in hard times, you have trust,” he said. “And it’s my hope to continue to deepen relationships and build the trust.”

Presidency Amid a Pandemic

The spread of COVID-19 dominated five-and-a-half out of Gash’s first 12 months as president. The first effects hit the Pepperdine Shanghai study-abroad program in late January, with the other five international campus locations going home over the course of the next two months — and finally, Malibu campus and the Washington, D.C., program transitioned to remote learning mid-March.

He said as soon as COVID-19 hit Shanghai and Pepperdine started evaluating the safety of students abroad, he talked to Benton and jokingly asked who he thought was going to win the 2020 Super Bowl, as obviously Benton was able to tell the future because he left Pepperdine before a pandemic hit.

Being President in the midst of a pandemic came with challenges, many of which stemmed from a lack of information or guidance from outside authorities, Gash said.

“So many times, we are information poor,” Gash said. “We don’t know what’s going to happen with the virus, we don’t know what the regulatory authorities are going to do. We don’t know when there’s going to be a vaccine. But we have consultants, and we have internal people who are giving us the best information available to us, and then we reason toward the decision that’s best for our community.”

While a large team, including the Disease Task Force and the Board of Regents, held strong roles in decision making for Pepperdine’s response to COVID-19, Gash said he wanted to stand behind and own the decisions of the University as President, personally signing many of the PR emails and other information sent out to the Pepperdine community.

“In the end, I’m the one who is accountable for the decision,” Gash said. “So that’s why I signed the vast majority of the memoranda that come out — and again, not taking credit for it, but it’s like, ‘OK, if you’ve got a challenge with it, then know that at the highest levels of Pepperdine’s leadership team, we own this.’”

While no one could have predicted the effects of the virus then, Gash said his proudest moment from his first year of presidency is not his own accomplishments but the attitude of the community.

“I would say the resilience of our students and the dedication of our faculty and staff — that’s what I’m most proud of,” Gash said. “This has not been what anybody expected, and I just feel like this is really disappointing for a lot of people. And you know, just watching how people responded — I’m proud of this community.”

President Andrew K. Benton, known and beloved by the Pepperdine community, was affectionately called the “Students’ President.” Gash said he hopes to live in that legacy.

“I don’t think there’s any better thing to be known for than being a Students’ President,” Gash said. “I would like to be someone who people think was fun as well and who was relationally connected to every aspect of the institution — faculty, staff, students, alumni, parents, donors — that relationships are the most important thing.” 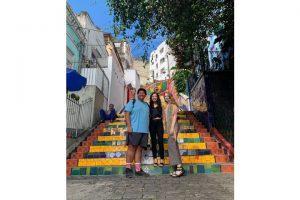