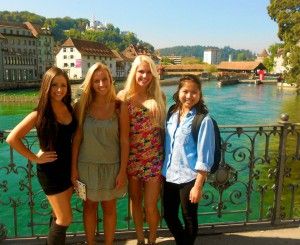 I’m going on my first weekend backpacking trip…If you don’t hear from me by Tuesday morning, assume I’ve been taken and please send Liam Neeson to come save me.” – Xoxo, Amber

And that was all I told my mom before setting out on my first mini-euro trip alone.  Don’t worry though, by alone I don’t technically mean alone – I brought 8 friends.  By alone I mean the best kind of alone – as in no adult supervision. 😉

Furnished with one, and only one rule, for our first weekend, we ‘must stay in the country’ (no joke, that was it…), we set out to explore the land of the Swiss. So like any mature, educated college students would do, we pointed to random cities on the map at the train station, decided to go wherever our fingers landed, and off we went. 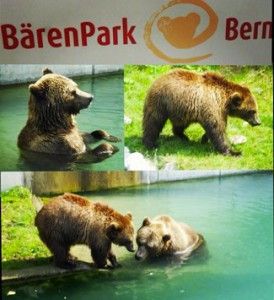 Amazingly enough, we managed to not only figure out which train to take, we even managed to find it, board it, and actually arrive at our first destination – the city of Lucerne.  The only real problem we encountered at the train station was deciding which kind of pastry to buy from the bakery (whereupon we eventually settled on chocolate croissants. YUM).

To say Lucerne is beautiful is an understatement (all right, it’s time for a little descriptive language…gotta put all my years of English class to good use).  When exiting the train, the first thing your eyes feast upon is the crystal clear blue waters of Lake Lucerne, lined with intricate buildings that look like life size doll houses.  The oldest and most beautiful bridge in Europe runs across the center of the lake, lined with pink and red flower blossoms.  To top it all off, swans appear perfectly scattered across the water as street violinists play romantic French music.  Yea, I’m not kidding. It was a scene straight out of a fairytale.

(I couldn’t help but think of what a fabulous date spot this would be for me and my European pop star boyfriend. 😉 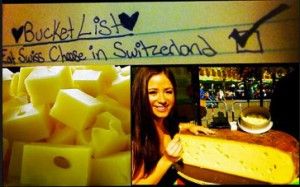 The panorama is so stunning in fact, that when the pictures I took came out so amazing, I considered trading in my dream of becoming an entertainment reporter for a career as a photographer (okay, not really, but the pics are a definite bonus for this whole blogging thing).

So after taking about 10,000 pictures, we ate lunch at a lakeside café, climbed to the top of the city castle walls, (which had even more amazing views, *cue the instagram uploads*).  I have a feeling “OMG, HOW GORGEOUS!!! ” is going to be one of my most overused phrases this year. 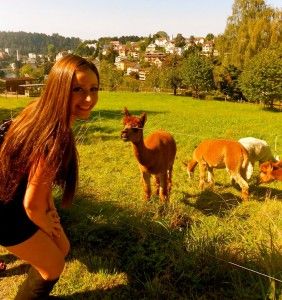 After strolling around town for a few hours, we ate dinner (and by dinner, I mean ice cream sundaes).  Why ice cream sundaes you ask? Well, (1) As if learning French to communicate in our French speaking residence of Lausanne wasn’t hard enough, Lucerne is located in the German speaking part of Switzerland…so we literally had no idea how to translate any of the items on the menus at the restaurants …it was like they were in a foreign language or something (#punny) and (2) Ice cream sundaes are delicious. So after our oh-so-healthful dinner, we went back to our hostel for the night to prepare for our next city in the morning – Bern!

We arrived in Bern around 10 am, and spent the day eating Swiss cheese at a cheese festival (yay, first item crossed off my European bucket list!), making friends with goats and sheep at a petting zoo, visiting Albert Einstein’s old house, and of course, shopping (you can take the girl out of California, but you can’t take the California out of the girl;)  But the best part of Bern, was meeting the real life Bernstein Bears!!! They were so adorable I just wanted to hug them like teddy bears (too bad they probably would have bitten my face off…so I managed to restrain myself). 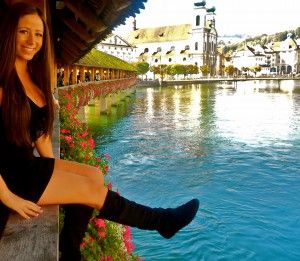 After eating dinner in Bern (and by dinner, again I mean ice cream…you can do that when no one is telling you what to do) we hopped back on our train to Lausanne, which we now proudly refer to as home. ☺ And though I never thought I’d say it, I was thrilled to return to the French speaking part of the country, where I could at least explain “je ne parle pas francais” (because in the German speaking Swiss cities, all I could do was awkwardly give a blank stare…).

All in all, our first weekend trip was a big success. No one got injured, sick, lost, and most importantly, not taken.  With this one major victory on our shoulders, the only rule Pepperdine has given us for this upcoming weekend is to “return safely”….

Which means we can literally go wherever we want…

Italy here we come;) (and by Italy, I mean Italian boyfriend…and gelato)