Pepperdine’s official position on sexual relationships among unmarried students is pretty typical of that of most conservative Christian ideologies: Save sex for marriage. That’s the end of it. Pepperdine’s student handbook states the university’s belief that sex should be between a husband and wife, and then goes on encourage students to seek answers in scripture.

Unfortunately, this policy, along with similar policies taken up by Christian institutions, creates an environment that is both harmful and dangerous for students. The fact remains that sexually active young adults need to be aware of different contraceptive options, build a healthy sexual self-esteem and engage in conversations that promote consent and understanding. There needs to be an open and frank conversation about sex among Christian institutions such as Pepperdine.

A study on trends in sexual behavior and marriage, published by the Centers for Disease Control and Prevention in March 2016, shows that more people are having sex outside of marriage than ever before. Because of this, Christian communities, Pepperdine included, should be aware of these changing viewpoints. Leaders should address them accordingly to provide a safe and healthy environment and promote smart decisions in regard to sexual health and development.

Waiting until marriage to have sex is great. There is much to be said about the excitement and anticipation, along with the freedom of knowing the time will come and not feeling self-conscious about it. It is an act of love and commitment that does have an amazing place in marriage.

Simply encouraging people to read scripture, pray about it or be threatened with academic probation is not a productive way to protect young people.

The National Library of Medicine and the National Institutes of Health found data that indicated abstinence-only policies lead to a higher rate of teen pregnancy published a study in October of 2011, titled “Abstinence-Only Education and Teen Pregnancy Rates: Why We Need Comprehensive Sex Education in the U.S.” The study also goes on to note that teenagers who received a more comprehensive sexual education, such as discussions about contraceptives and STI’s, were less likely to become pregnant, and that they were having less sex. The sexually active ones were more likely to use contraceptives and be aware of the dangers of STI’s, taking adequate precautions to prevent such occurrences.

This is why Christian leaders need to recognize the damage they may be creating by having an intolerant “No Sex” policy. By shaming young adults into thinking they need to be embarrassed and punished for certain feelings, doors open for self-esteem issues, sexual harassment and other unhealthy behaviors. There should be a safe and shameless place to ask their questions, free from judgment.

This is not to say that abstinence is a dying art. Christian culture has a right to promote waiting until marriage, and there are numerous good reasons to do so. But the fact is that not everyone waits until they’re married to engage in sexual behavior. The ability to recognize that about the ideology of abstinence is the next step in keeping young adults healthy and safe. 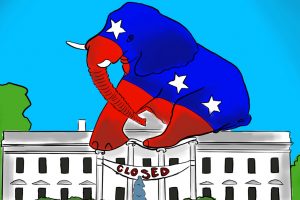 Art by Madeline DuvallThroughout the past week, news pundits on both sides of the aisle butted heads on who was to blame...
Copyright 2013 Jupiter Premium Magazine Theme
Back to top