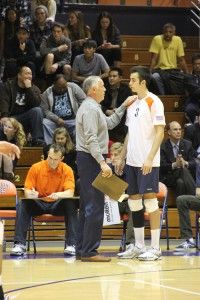 “Just tell me who you want,” Marv Dunphy said after being asked if there were any men’s volleyball alumni that he kept in touch with.

This snapshot — Dunphy pulling out a binder full of names — seemingly captures the key to his years of success in a nutshell.

Dunphy has coached Pepperdine to 12 NCAA finals appearances, he coached the USA team from 1984 to 1988, in which they held a No. 1 world ranking, and he has coached 51 Pepperdine players to become All-Americans.

Along with his great success, undoubtedly comes a wealth of intuition. However, Dunphy reveals that is not the case. What sets him apart is that he recognizes aspects that other coaches may overlook.
“There are no secrets,” Dunphy said with a knowing smile. “Coaching isn’t all about knowledge. It’s about caring, communicating, control and courage.

Whether there is or isn’t any magic, Dunphy, now beginning his 29th year as head coach of men’s volleyball team, has managed to attract major talent such as freshman Josh Taylor, who has quickly risen as a force to be reckoned with on the court.

Throughout high school, Taylor received recruiting offers from top-notch universities such as USC and Stanford, yet he turned down those schools to come to Pepperdine for one major reason:
“Marv was the biggest reason why I came to play [at Pepperdine],” Taylor said. “I want to play for the US National team and represent our country in the Olympics, and he was the one coach that I knew could get me good enough to possibly reach that goal.”

With each passing game, Taylor realizes that there is more to Dunphy’s coaching than pure knowledge.
“He is so personable and wants us to succeed as individuals so much,” Taylor said. 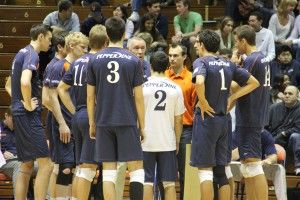 Taylor’s teammate, senior Matt Pollock, said he believes that Dunphy knows what it takes to put together a winning group of guys. Pollock, an Illinois-native, may not have come from a well-known volleyball high school, but Dunphy still picked him out.

“Marv initially showed his loyalty to me by taking a chance on a 6-foot-9-inch skinny kid from Chicago,” Pollock explained. “I believe I have come to the elite level of blocking due to Marv and the coaching staff.”

Plus, being Pollock’s fourth year playing for Dunphy, he has gained the utmost respect for his coach.

“I respect two things above all about Coach Marv,” Pollock said. “First, for his honesty. This was especially valuable to me in my recruiting process as I was a 17-year-old kid who was lost in the world.

“Second, is his willingness to talk, respect and care about people that come up to him.”
First-year assistant coach, Lauri Hakala couldn’t emphasize enough on how personable Dunphy is.
To demonstrate his point, he quoted an old friend of Dunphy: “Marv won’t let anyone not be his friend.”
That statement clearly provides the explanation as to why Dunphy pulled out the giant binder of alumni contacts — not because the Pepperdine Alumni Association gave it to him for reference, but because he keeps in touch with most of them.

After calling a few of Dunphy’s former players, it also became apparent that he has affected and continues to affect their lives.

Both Peter Balding and Troy Tanner, Pepperdine men’s volleyball alumni, said they will still recall Dunphy for advise or just ask themselves, “What would Marv do?”

Balding even went as far as saying that he sees himself asking Dunphy for advice similar to how former UCLA men’s basketball players would call John Wooden for advice. To Balding, Dunphy is more than a volleyball coach.

“We became better people as a result of playing for him,” 1978 NCAA championship MVP Mike Blanchard said. “Without his influence I’d be different than I am today. He was nothing but positive.
“Especially now that I have children, I try to emulate what he taught me and pass it on to my own children.”

Dunphy recognizes the powerful ability he has to impact his players, and said he uses it positively and to his advantage, doing his best to provide his players with a memorable experience that they can   take with them beyond their four-year NCAA volleyball careers.

“I want them to know that some things are more important than volleyball,” Dunphy said. “They need to have balance, and they can’t just be one-dimensional.”

He has affected the game of men’s volleyball, and he has also impacted each player he has coached.
In addition, he has accumulated countless accolades. Dunphy, however, does not take full advantage of the bragging rights he has earned with his success.

“A lot of people ask if winning the gold medal was the highlight of my life,” he said humorously. “But that was 1988. It was a long time ago. My life didn’t end there, and my coaching career didn’t end there.

“There’s this emotion of jumping up and down when you accomplish something like that, but what you really remember is who you did it with and how you did it.”

Dunphy went on a five-year hiatus to coach the U.S. Olympic team 24 years ago. He said he does not plan on leaving again.

“It’s rare nowadays for people to stay at one institution for 30 or 40 years and ride off into the sunset,” Dunphy said. “The continuity of personnel isn’t what it used to be in all aspects of the professional workforce.

“I’m really grateful [Pepperdine has] allowed me to leave and come back.”

Pepperdine University is known for  its strong women’s volleyball and men’s  tennis programs, but not many are familiar...
Copyright 2013 Jupiter Premium Magazine Theme
Back to top