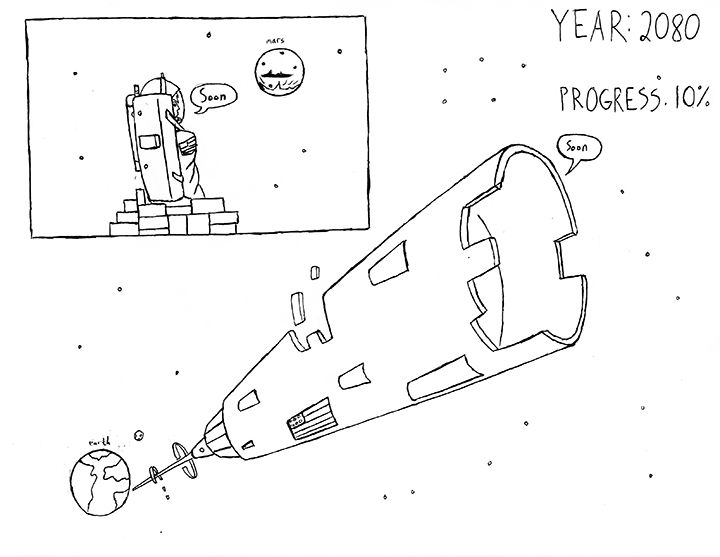 I lived in Colorado as a kid, away from cities and shopping malls, in a rural town called Roxborough. We had an amazing view of the stars from our house; no city lights took away from the sky’s grandeur.

As a kid, I was also a science fiction fanatic and often read books or played video games in which characters left Earth and traveled into space.

Now that I’m in college, I still read science fiction and play sci-fi video games, but now I pay attention to news about space travel. In 2013 an article by Ben Brumfield and Elizabeth Landau called, “A one-way ticket to Mars, apply now,” reported that the Dutch company, Mars One, was accepting applications from the general public to go to Mars on a one-way trip. I almost applied.

The draw of leaving Earth, for myself, is knowing there’s so much we don’t know and haven’t seen. Others are drawn by the idea of the “next step” for humanity; we’ve conquered Earth and it’s time to move on, or we need a new start, while others believe it’s the only way to ensure survival.

Elon Musk is one of a handful of entrepreneurs who wants to venture out into space, and like the CEO of Mars One Bas Lansdorp, these individuals will move heaven and Earth for the next step.

According to the Jan. 19, 2015 article by Max Metzger, “Elon Musk Wants to Create Global wi-fi in Order to Fund a City on Mars” for Newsweek, Musk, champion of Tesla and SpaceX, has a vision to get humans to Mars in a decade. He wants to use SpaceX and a global Internet service to generate enough capital and technology to put a self-sustaining city on the red planet.

Musk wants Mars to be the next step for mankind, and he’s serious about it. He’s even added a SpaceX branch in Seattle that will help develop technology and “work on electronics, software, structures and power systems.”

The Mars One mission plans on sending humans to Mars in 2024 and has accumulated $6 billion to send them there, according to the article above.

They will train for the mission, learning to repair their habitat and how to survive in Mars’ harsh environments. After they live on Mars for a year, a second wave will be sent in 2026, and the habitat will be expanded. But those explorers can never come back.

A one-way trip to Mars — a lovely lifetime vacation — sounds insane. I didn’t apply to the Mars One mission because I didn’t think I could leave people behind like that. It’s interesting to me that there are people that could.

It’s also interesting that individuals who are wealthy and powerful want to help humanity leave Earth, rather than stay and use their ideas to better our current world.

These ideas are also evolving out of a time in which global culture is developing and changing. Conflict is still rampant in our world, as well as disease and prejudice. Even if it doesn’t seem right to leave, one could imagine why it doesn’t sound so bad.

Many that came to America hundreds of years ago were fleeing intolerance and rushing toward freedom or economic opportunity. People still leave what’s familiar for the unknown because of the chance at opportunity. Maybe leaving Earth will grant us the chance to leave behind some of our issues.

I have similar feelings to Musk. I think humanity should leave Earth someday; it’s our way of progressing. Unless we return to a simple life of farming and remove technological progress, we will only move forward. I think it’s our place to wonder about things we don’t know, and then explore, measure and discover.

Going to Mars or anywhere in space would be a chance at exploring planets and discovering our universe’s workings. I think if humanity could learn from its mistakes here and do better somewhere else, maybe we could live in harmony with nature or with each other. But it will take decades, maybe centuries, to even have Mars be a feasible option.

One of my goals in my lifetime is to make it to space — to leave Earth and to look at our big, blue mother from the outside. Maybe I’ll go to Mars too and have the ultimate nerd adventure. All I know is that humanity’s ready to take the leap. All we need to do is jump.