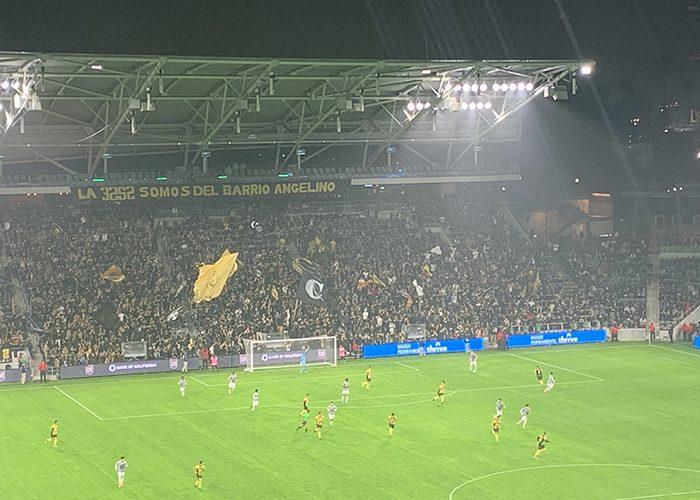 Los Angeles Football Club fans wave flags to celebrate the first goal of the season during a friendly match against Club Atlético Peñarol on Jan. 25. Photo by Vernie Covarrubias

Within the 10th minute, team captain Carlos Vela scored the first goal, erupting the stands at the Banc of California Stadium into a display of waving banners, smoke bombs and supporter chants.

Founded in 2018, LAFC is the second-newest team to join Major League Soccer (MLS). The team shares its home city with the Los Angeles Galaxy and has garnered 22,042 attendees on average at its home games over the course of its first two seasons, according to an LAFC press release.

LAFC won its first game of the year against Peñarol 2–0.

“This is the best sporting event I’ve ever been to in the city of Los Angeles, and I’ve lived here for a long time,” actor Keegan-Michael Key said in an LAFC interview. “This is unbelievable. It’s what football should be.”

Key is not alone in his sentiment, as other fans have taken note of the newly implemented MLS team’s rapid growth in support.

“Despite only playing 42 games at their home stadium, LAFC’s fans are the most engaged of any LA fan base when it comes to in-stadium antics,” Pepperdine Sports Law professor Alicia Jessop wrote in a tweet.

The team’s independent supporters union, the 3235, recently won the Independent Supporters Council’s “Tifo of the Year” award for its Freddie Mercury tifo. A tifo is a large banner which fans hold up at sporting events to form a display. The supporters hoisted a large-scale poster of Mercury accompanied by the song “We Will Rock You” on LAFC’s official Pride Night on May 24, 2019.

LAFC sold out all home MLS games, including three playoff matches played at Banc of California Stadium, which has a seating capacity of 22,000.

The stadium opened shortly before the first season began April 18, 2018. The venue is the first open-air stadium in Los Angeles since the opening of the Dodger Stadium in 1962.

“This is the best stadium I have ever been in,” Mayor Eric Garcetti said in an LAFC interview. “I saw the face of my city and I felt the heart of this town.”

In its inaugural season, LAFC qualified for the 2018 MLS Cup playoffs after earning the third-place spot in the Western Conference, according to official MLS standings. LAFC’s second season exceeded expectations after breaking 13 MLS records.

FIFA identified team captain Carlos Vela as one of the most talented young players in the world after leading Mexico’s National Team to a 3–0 victory against Brazil during the 2005 U-17 World Cup. Vela went on to play for notable European clubs including Arsenal, Celta de Vigo and Real Sociedad before beginning his MLS career.

Vela has been an instrumental player for LAFC after breaking the MLS single season scoring record with 34 goals during the 2019 season.

The CONCACAF Champions League highlights the top 16 clubs in Central America, North America and the Caribbean. The teams compete for the opportunity to face off with the champions of the world’s other five soccer confederations, including the home of some of the best European clubs, the UEFA Champions League.

LAFC earned a spot in the CONCACAF Champions League after winning the supporters shield during their historic 2019 season.

“Together with our community, we continue to make soccer history in the heart of Los Angeles,” LAFC Owner and President Tom Penn said.

LAFC will begin its Champions League play Feb. 18 in León, Mexico. The next opportunity to watch an LAFC home game is Feb. 27 against León. 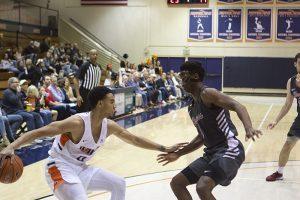 Redshirt junior Keith Smith dribbles the ball in the first half of Thursday's game at Firestone Fieldhouse. Photos by Paxton...
Copyright 2013 Jupiter Premium Magazine Theme
Back to top