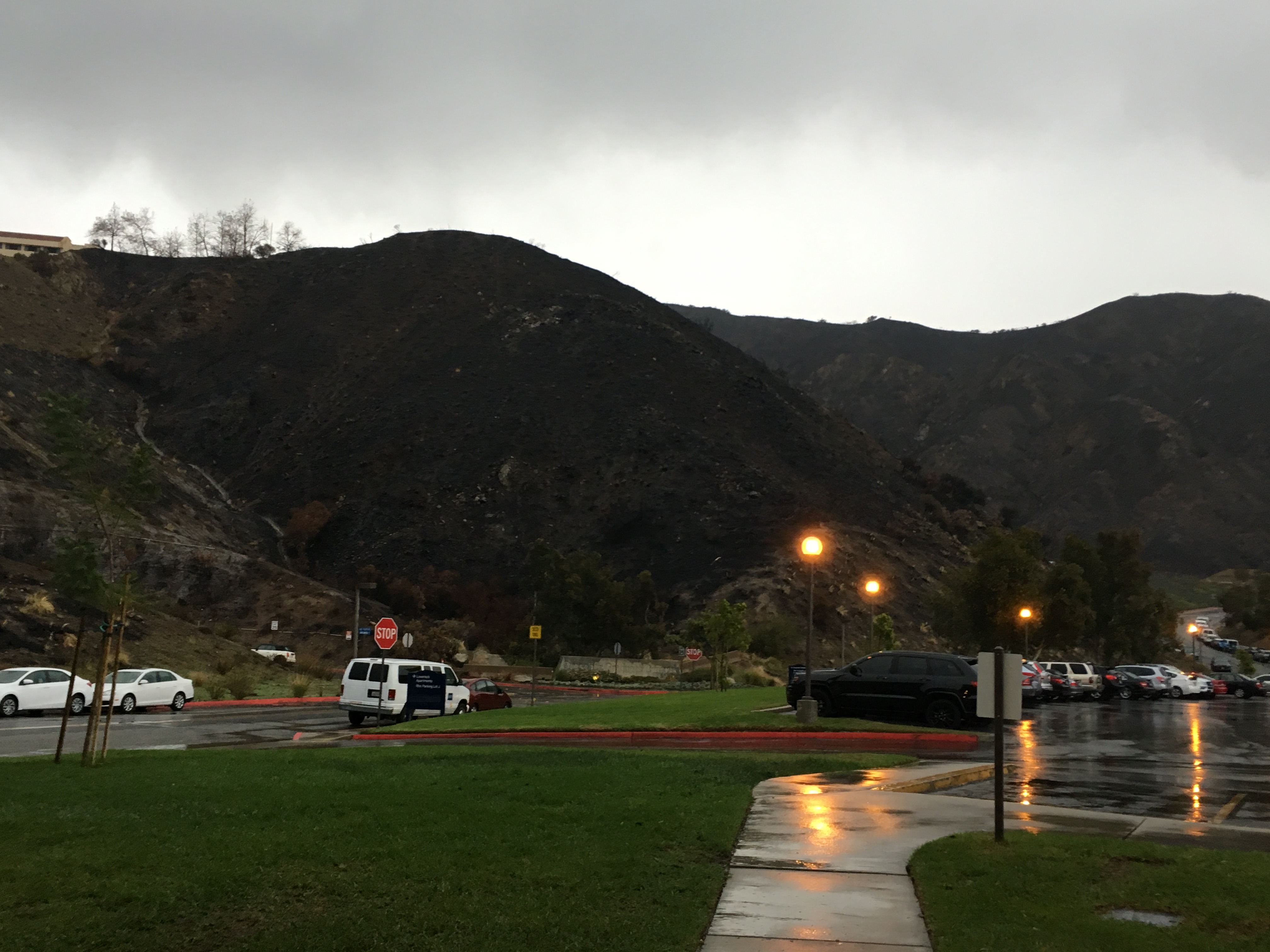 Rainstorms are back, but many students may not understand the risk of flooding, mudslides and falling rocks that comes with the rain.

“I don’t think a lot of people are that concerned,” sophomore Morris Chen said about potential mudslides. “Unlike the fire, it’s not like you can see it … it doesn’t happen until it happens, and when it happens, it’s too late.”

A few semesters ago, the prediction of rain would cause Pepperdine students to anticipate a day off. Now, students prepare to make the trek to class from their dorm room up in the Drescher Campus, their freshman suite or commuting from off-campus, regardless of how gloomy it looks outside.

LA County officials issued an evacuation warning Jan. 15 during the rainstorm from Jan. 14-17. Some students who lived off campus also lived in areas under evacuation. Pepperdine sent an email to on-campus students asking for volunteers to house evacuated students. This is similar to an email sent Nov. 9 requesting students to house those evacuated due to the fires.

For those living off-campus, additional care is necessary as city officials could issue an evacuation. The storm from Jan. 31 – Feb. 2 did not bring as much rain – almost 1.5 inches – compared to the over 2 inches of the storm of Jan. 14-17.

The Graphic published an article after the last rainstorm detailing some of the changes Pepperdine made around campus, including additional fencing and blockades. Some streets and parking lots were closed due to their close proximity to land that had burned.

“I personally have been trying my best not to park on the hillsides just because that’s like the most vulnerable place with mudslides and falling trees,” Chen said.

The biggest danger with rainstorms was not the steady rain predicted for the majority of this storm, but the mudslides the rain could cause, Fire Captain Armando Bonilla said. The issue for major mudslides is from a heavy continuous downpour of rain. On Feb. 2, the National Weather Service issued a flash flood advisory.

The LA County Fire Department does not take prospective natural disasters lightly, Bonilla said. To prepare, the county consults a Fire Behavior Analyst who is part of the National Wildfire Coordinating Group to determine the danger of fires.

The aftermath of fires has an immense impact on flooding. For rain, which has flooding and mudslide implications, the fire department looks into the potential safety hazards for the community in advance.

Bonilla is a fire captain at LA County Fire Department Station 88 located behind the Malibu Colony Plaza. Because of the canyons potentially closing due to mudslides and boulders falling, Bonilla said the fire station coordinates in advance with other fire stations to elevate staffing levels to what is needed.

“We analyze the weather beforehand,” Bonilla said. “We increase additional staffing levels beforehand; we ramp it up with our strike teams.”

The danger shifts with the increase of firefighters in Malibu. As they focus on different potential emergencies around the Pacific Coast Highway, they leave their normal station area more vulnerable, Bonilla said. However, this is normal for high-risk times such as fires or rainstorms, so the stations prepare for this with increased staffing all around.

“People know they are the first to be called,” Bonilla said about the emergency response teams from other areas. “We [also] work with the lifeguard to patrol around the area.”

LA County Fire has a winter safety preparedness section on their website, which lists various ways to prepare for the upcoming storms. These include having sandbags around areas of highest mudslide concern, preparing a go-bag and planning a safe place for pets to stay in case of an evacuation order.

Around campus, impacts of flooding and mudslides are not overly obvious. Freshman Meagan Jaycox said she has hiked up to the cross, one of the highest accessible points on campus, since the last rainstorm.

“I didn’t notice any loose boulders,” she said. “I noticed they did have some sandbags out in one area, and there was a lot of mud that had come down.”

Some sandbags are placed around the highest risk areas on campus as well as impermanent walls at the base of Drescher. Other parts of campus have netting down to hold the dirt in place. Even after the rain has cleared out, the potential for mudslides or falling rocks and trees persists.

The amount of time it takes for mudslide potential to decrease cannot be easily determined as the lack of plants to hold the dirt in place is common after the fires, Bonilla said. The level of saturation of the dirt also plays a large factor as well as the grade of the hill.

NWS Los Angeles tweeted a graphic Jan. 30 predicting total rain accumulations would range from .5 to three inches throughout LA from Jan. 31 – Feb. 2. The heavy rains, which totaled roughly 1.5 inches in Malibu, impacted the canyon roads into Malibu – Malibu Canyon Road, Las Virgenes Road and Kanan Dume Road – during the last storm. Each road was closed for periods of time throughout the storm from Jan. 31 – Feb. 2, but all roads were cleared by Monday, Feb. 4.

The length of time it takes for a hill to no longer be susceptible to mudslides is “more about what the hill can handle,” Bonilla said.