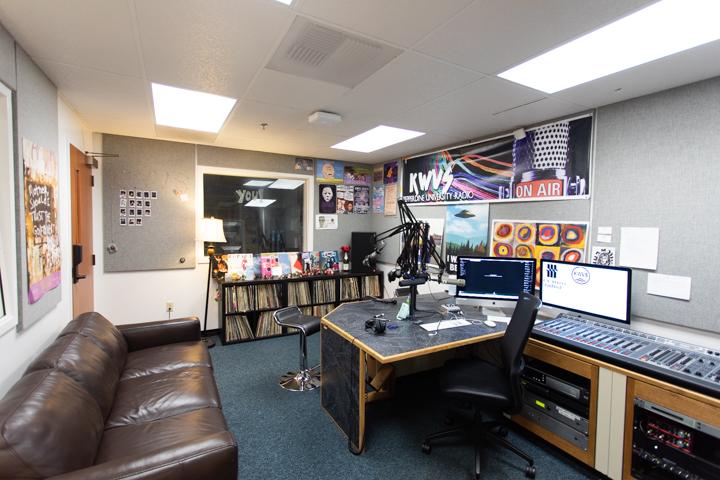 The KWVS radio studio sits empty on Nov. 9, 2021. Student DJs play music and speak their minds, live on the radio, in the studio. Photo by Ryan Brinkman

Inside the CCB is a small hub filled with records and news articles, telling some of the most famous stories from KWVS (FM 101.5) history. From interviewing Dinner and a Suit to battling with punk band, Alkaline Trio, KWVS has a vivid life story — and it continues to inspire students to get involved and share their voices with the world.

Since 2002, KWVS has represented not only experiential learning at Pepperdine but also the school’s diversity, as it showcasing the broad spectrum of perspectives and ideas across campus through shows such as Kickface and On the Whim. Through the station, DJs speak their minds, while also relaxing and enjoying a few engaging hours with the KWVS audience, the KWVS website said.

“I think it’s helped me learn to better express myself, I’m not always as outgoing as I am on air, but it’s given me a good opportunity to exercise that part of me,” said Abby Morrow, junior Director of Events and DJ.

While on air, students create their own shows, play their favorite songs and experience first-hand the world of radio journalism. From conducting interviews to hosting online concerts on the station’s website, the job of a DJ expands beyond playing songs across the airwaves, the KWVS website said.

Junior Station Manager and DJ Mharie Brigham said working at the station has helped her emerge from her shell and learn how to manage logistical issues in business and event management.

“I suffer from extreme stage fright; this has helped a lot with being able to express myself and communicate better,” Brigham said.

Brigham said the station manager’s job is flexible and acts similarly to a CEO position. From day-to-day, she often organizes shows and promotes them on the station’s website. Although she doesn’t enjoy all of it, she loves the number of DJs interested in creating new shows for the KWVS audience.

Through submitting an online form and talking with Brigham, students can not only learn the ropes about radio broadcasting but also create their own show, using some of the station’s resources to both produce and manage it in an effective way.

“The best part is all the wonderfully interesting people that come in and out of this room and put their shows on air — the little community that we have here and all the little quirks that it has,” Brigham said.

Being a DJ has its perks, as Pepperdine provides students with opportunities to see their favorite acts in concert, junior DJ Serena Woon said.

“I didn’t even think that was possible — I feel so incredibly lucky because there are people that I would love to see, but because I’m a broke college student I can’t afford to see all of them,” Woon said.

Woon said being a DJ allowed her to voice her thoughts and share topics she typically only talks about with close friends.

“It kind of provides a gateway for me to share more of myself with people besides my inner circle,” Woon said.

Woon summed up her role as a “chummy old-time” because she plays music and talks with her friend for the duration of her show, she said.

Morrow said that she hosts a weekly talk/music show on Mondays at 7 p.m., along with her best friend, junior Lauren Chivers. Morrow said her job consists of planning meetings, organizing show schedules and assisting with events.

The station gave Morrow the opportunity to experience broadcasting, an interest she would’ve never explored otherwise, she said. She enjoys listening to podcasts and always wanted to create her own.

“I’ve always wanted to have something along those lines or do something in entertainment, but we definitely didn’t have something like this at my high school and I don’t know what other situation in my life where I would have an opportunity like this,” Morrow said.

Working at KWVS helps Morrow, she said, venture deep into broadcasting, something she was too scared to pursue in the past.

“And it’s low enough stakes where I can do it and if it doesn’t work out, I’m glad I had that experience,” Morrow said.

For Morrow, she said, the best part of working for the station is running and hosting her own show.

“I think it’s so fun and it’s the highlight of my week — listening to everybody’s else’s shows as well because I can tell when I listen to everybody else’s [shows], I can tell they’re having just as much fun as we do during ours,” Morrow said.

KWVS has served as not only a learning opportunity for students interested in broadcasting but also a cathartic outlet for those who wish to share their music taste with the world, the KWVS website said. Students can tune in on FM 101.5 or go to the KWVS Instagram to listen and learn how to get involved.