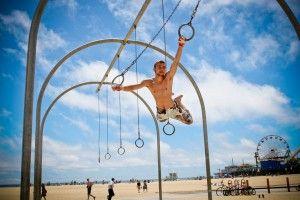 About nine miles from Pepperdine, just south of the Santa Monica Pier, sits the original Muscle Beach. Junior Ardavan Tavakoli is one of the 50-plus people who flock there on Sundays to work out on the traveling rings, and to set up slacklines.

To some, these terms may sound foreign — traveling rings and slacklines — which is understandable, since they have only recently begun to pick up in popularity.

“Slacklining is not tightrope walking,” Tavakoli explained. “That is the most common misconception amongst people. With tightropes, the rope is tight, and with slacklines, the line is slack. It’s self-explanatory.

“Slacklining is totally different. It’s much harder and more challenging because the tautness of the rope changes as you walk across, whereas with a tightrope, the tautness is constant.”

In addition to slacklining, Tavakoli also uses the traveling rings. They are comparable to monkey bars, in that one travels from ring to ring. Tavakoli started his Santa Monica Muscle Beach workouts about three years ago.
He says his friend suggested the “sport” to him one day, knowing Tavakoli loves unique challenges.

“I went out [to the beach], and immediately fell in love with the slacklines and rings,” Tavakoli said. “For the slacklines, it usually takes the average person around two weeks to master the balancing. I learned in two hours.”

Now he goes to Santa Monica practically every Sunday, staying for the entire day. Tavakoli said he goes seven days a week and stays for 8 to 10 hours per day during the summer.

He revealed how he has developed close bonds with fellow beach-goers who share the same passion for rings and slacklining that he has.

“I love the community out there,” Tavakoli said. “They are really accepting of everyone, including newcomers. The more experienced people are more than happy to help you and guide you. They also give out pointers, and they’ll even hold your hand when you first start out on the slacklines.

“In general, mostly everyone who slacklines and does the rings knows each other. We’re all friends. I’ve met the coolest people.”

The crowd that participates in these sports involves a wide array of backgrounds and personalities, as Tavakoli himself demonstrates. He recently transferred to Pepperdine and is a Business major. He also works on campus as a computer technician. 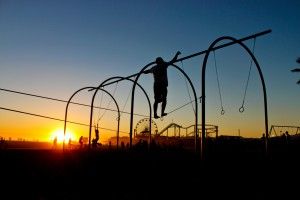 In high school, he said the only sport he did was track, yet now he swings from traveling rings, walks across slacklines and, this past summer, he picked up rock climbing and bouldering as hobbies. He has had no prior training for any of them, and says that all it takes a lot of practice.

While Tavakoli participates in such a variety of activities, he talks most passionately about slacklining, and explained why:

“Being out on the slackline, in particular, is very relaxing,” Tavakoli said. “It feels like it’s just you and the line. It’s a lot of fun. I could talk about this stuff all day long.”

Sometimes Tavakoli pulls out his slackline equipment from his Huber Eaton Hall dorm room, and sets up outside using two palm trees. Although he makes it appear easy, walking across the inch-wide line four feet above the ground proves to be harder than it looks.

“You just have to relax and concentrate on what’s in front of you,” Tavakoli said.

Tavakoli said he did not know any slackliners when he first arrived at Pepperdine. He has successfully spread the word  after being inspired by the abundance of students he has met at other schools, such as UCLA and UC Berkeley, that take part in slacklining.

“I want to get more people from Pepperdine to come out with me on Sundays,” Tavakoli said. “Four or five guys bought equipment over winter break. It’s not just a guy’s sport either, though. I’ve met quite a few very talented girl slackliners.”

Being elevated above the ground on a string can be intimidating to some, but it is actually a fairly safe sport, especially when the line is set up over sand at the beach, according to Tavakoli. 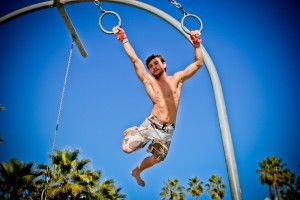 “It’s one of the safest sports out there,” Tavakoli said. “If you set up over four feet it can get a little dangerous since the line can snap back if you fall off. Once I got a huge bruise across my back that way. The only major injuries people normally get are from falling the wrong way, but that’s the same as with any sport out there.

“I really encourage people to get out there and give it a try. When I have my slackline set up outside my dorm, a lot of people stop and ask if they can try it. I think it’s a sport on the rise at Pepperdine.”

The Pepperdine baseball team has started their season in championship-like form with a four-game win streak. The Waves opened...
Copyright 2013 Jupiter Premium Magazine Theme
Back to top