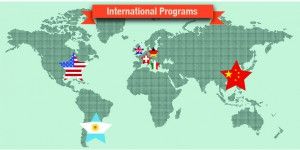 The International Programs priority deadline passed about a week ago, which according to IP Director Jeff Hamilton means that most participants have already applied.

“I would say that what we experience generally is that 90 percent of the students who end up going overseas have applied by the priority deadline,” Hamilton said. “The numbers that we saw were enough to fill up all the houses.”

“We don’t release those numbers because it fluctuates after students get in, and people go to different programs,” Hamilton said. “We don’t want people to draw incorrect conclusions based on those numbers.”

There were some themes on which Hamilton could comment, however.

“We had a higher percentage of the student body apply than the past five or six years — which is great that everybody understands the importance of Study Abroad.”

Furthermore, according to Hamilton, the London program is once again one of the more popular destinations.

There were some themes on which Hamilton could comment, however.

“We had a higher percentage of the student body apply than the past five or six years — which is great that everybody understands the importance of Study Abroad.”

Furthermore, according to Hamilton, the London program is once again one of the most popular destinations.

“This year, the highest percentage of applicants to available spots was in London,” Hamilton said. “What happened there was that we opened up the Organic Chemistry opportunities with Professor James White, who is an incredible professor who is really well known here and really well known in the field.”

According to Hamilton, the Lausanne and London programs have been favorites historically, but there are many variables.

According to Hamilton, there is no correlation between the record number of students in the class of 2016 and the number of students who will be cut from the program. In fact, he said that nobody is denied the opportunity to go abroad in a literal sense.

“We don’t cut anybody, and that might be a hard terminology,” Hamilton said. “We wait- list people, which for some people may feel like they got cut, but what it really means is that there is space for them in the International Programs (or that there might be space for them eventually). Some people might not be able to get their first choice program, and I think that’s going to be the hardest part.”

Hamilton said that there are scholarships in place for students who cannot afford the experience.

“Scholarships are available online on the International Programs website,” Hamilton said. “Under the ‘for current participants,’ there is a section called ‘scholarships,’ and the application deadline is Oct. 23.”

Hamilton said in his own life, the process of breaking away from the norm was a growing experience.

Although not quite as big as the crowd she played to at the Electric Daisy Carnival 2012, Krystina Sky’s performance at the Avalon...
Copyright 2013 Jupiter Premium Magazine Theme
Back to top