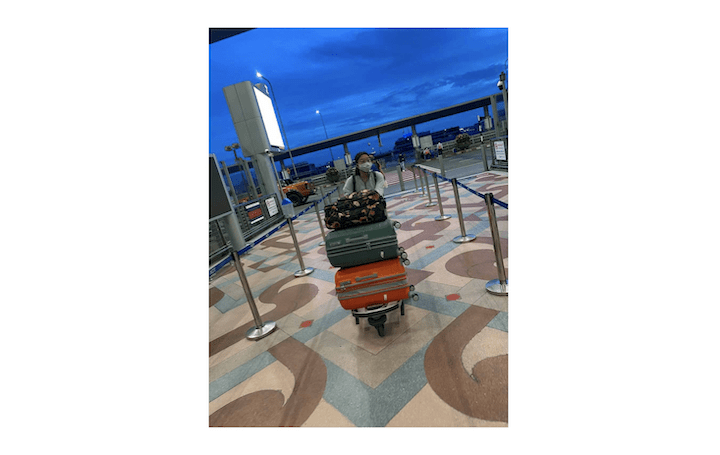 Sophomore Pinn Jinkaojai arrives at the airport in Thailand on July 29 to fly to the United States. Due to COVID-19 restrictions, Jinkaojai’s 2020 visa expired, delaying her move to California. Photo courtesy of Pinn Jinkaojai

As excitement grows for a normal school year to begin, Pepperdine international students are particularly grateful for the return to campus.

International students faced added challenges in the past 18 months with learning online due to different time zones, cultural and language barriers and the visa process. Despite anticipated challenges, students such as senior Ece Yagci said they look forward to having the opportunity to experience their American college dream.

“We’re there to not just learn but to also share our culture and our past — our history,” said Yagci, senior international student from Turkey.

For the first three months of the fall 2020 semester, Yagci took classes from Turkey before moving back to California for the remainder of the school year to be in the same time zone as her professors and classmates. Still, with school being virtual, Yagci said she struggled to connect with her American classmates and immerse herself in American culture.

“I don’t think there was anything socially I could involve myself in from such a far distance and with that big of a time difference,” Yagci said.

Pinn Jingkaojai, a sophomore international student from Thailand, said she attended her last two years of high school in the United States and decided to stay in the country to prepare for the fall 2020 semester at Pepperdine. When she realized the campus would not open, however, she moved back home to be with her family in Thailand, where she said she became accustomed to independently learning.

“I’ve just been so used to doing things on my own time,” Jinkaojai said. “Doing things through recordings, pressing pause, play, double speeds, going back in lectures — so just being in class real time, I’m not prepared for that yet.”

Despite staying up at night to take live classes, Kristine Briede, a sophomore international student from Latvia, said that she found it hard to meet people and interact with professors.

Yagci received a student visa at the start of her first year for a total of five years in the United States. When she decided to move back to California in Oct. 2020, she said officials debated the validity of her student visa since she was not moving to attend in-person classes.

“They did give me a hard time before letting me in,” Yagci said. “Making sure that I’m not here to work for money or making sure I have a place to stay — because on my official visa document, it says that my residency is Pepperdine University, and last year, I wasn’t staying on campus.”

Jinkaojai, on the other hand, said each year she studies in the U.S., she has to renew her visa. Because she thought she would be on campus in spring 2021, Jinkaojai got her visa for her first year at Pepperdine, but it expired without her ever using it.

“I had to redo my visa, which is a long process — and a pricey one too,” Jinkaojai said.

Briede came to campus to play beach volleyball in spring 2021 and said while she was lucky to get her visa just days before COVID-19 closures began, she sympathizes with other international students who had to wait over six months for theirs.

Asynchronous learning as an international student was a challenge that Jinkaojai said shaped her into a more proactive and independent student that she will continue to be in her in-person classes.

“It helped me become a more aware student and more responsible student in a way of taking ownership of my education,” Jinkaojai said.

Yagci said online learning showed her that being in a classroom makes a difference in understanding the words her professors are saying better, processing concepts and asking questions, because English is her second language.

“You’re still learning English, it’s a never-ending process,” Yagci said. “And on top of that, you’re asked to absorb all of this academic information through a screen and then come back in person and know about it, which I’m sure is going to be really challenging for a lot of international students.”

Being in Pacific Time Zone allowed Briede more time in her schedule to learn, study and practice than in her home country.

International Students Feel Excitement For the Return to Campus

When first living in Malibu, Briede said the culture shock of the United States was exciting to her. Briede said she cannot wait to get to know more domestic and international students through on-campus organizations.

As an international student ambassador, Jinkaojai said she is excited to make friends but nervous for the adjustment from two years of virtual school to in-person classes so far from her home in Thailand.

“Meeting people your age all the time could be fun, but it could also be a challenge where there’s so much newness around you that you forget to ground yourself,” Jinkaojai said.

Yagci said she is looking forward to being an international student ambassador on campus during her final year at Pepperdine because of her own positive experience as a first-year.

“When I first came to Pepperdine, we had that international student orientation which introduced me to so many people from other cultures,” Yagci said. “But we’re sharing a unique experience as international students that makes us kind of click and hold on to each other.”