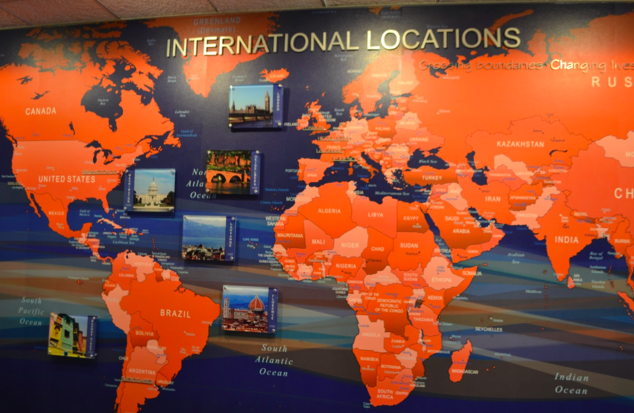 For the third year in a row, Pepperdine has been ranked by the Institute of International Education as the No. 1 university with more than 67 percent of Pepperdine students participating in a program during their time as students, according to the International Programs website. For some students, though, the opportunity to study abroad can create challenges with finances and course schedules.

The international programs do not offer the same amount of classes that are offered at the Malibu campus, leaving some students unable to enroll in the courses or credits they need to graduate on time. In addition, students must pay $5,000 to withdraw from the international program prior to leaving for abroad, or $10,000 to leave before the full year is up.

First-year student Rosina Calandra, a Nutritional Science major, said she wished someone advised her to make her four-year academic plan to help her through the process before signing the study abroad contract. A student’s four-year plan lists the courses a student needs to take each semester to graduate. In IP contracts, students are advised to meet with academic advisors to go over course planning. The IP office can assist with students considering what courses in an abroad program best meet their needs.

“I really wish I had someone tell me that I should figure out what classes I need to take before deciding to leave for a whole year,” Calandra said. “I now will have to take summer classes because the science courses I need are not offered at my abroad program.”

Calandra said he received advising from her major advisor regarding classes for her major, but she did not receive advising for her General Education requirements. She also explained that she does have the option to withdraw from the program, but she will have to pay a $5,000 fee to do so.

Ronald Cox, associate dean of International Programs who oversees academics in IP, said he recognizes issues students face with course enrollment. Whether it be on the Malibu campus or the programs abroad, he has been working with each IP program to understand how class schedules work and how to help students enroll in the classes.

“Since I started in August 2017 as associate dean of IP, I have been working to understand how we schedule classes in IP, and how we advise and assist students to enroll in them,” Cox wrote in an email. “I have been impressed with the efforts the program staff in our different locations make to accommodate students, trying to set an optimum schedule so students can take the classes they need, even making scheduling changes up to the last minute to do so.”

“At the same time, we have made improvements and expect to continue to improve in scheduling and advising so that students will have an even better chance at getting into classes they need, or at the least will better know and understand why when they cannot,” Cox wrote.

Although, depending on each students’ major, there may be difficulties in terms of enrolling in the classes needed to follow their four year graduation plans.

Senior Andy Changala is one of the students who said he was unaware that his decision to study abroad in Heidelberg, Germany, would set him back academically and financially.

“I took 12 units abroad, and one of the classes was a pass/fail class,” Changala said. “Being abroad and in the musical program, they [the classes and music program requirements] were very conflicting.”

Changala added that another reason why he only studied abroad for one semester was because of the cost.

It can cost up to $10,000 in additional fees to attend an abroad program, Changala said.

While abroad, Changala also lost his music scholarship, which he was unaware would happen to him and added to the financial burden he experienced abroad.

Although Calandra said that the IP office advised her to compensate for missed classes by enrolling in summer classes, that solution does not always work for everyone.

“It’s like an extra $5,000 to take a summer class, and I can’t do that,” Calandra said, who is planning on studying abroad next year in Heidleberg. “I’d rather come back or just stay here to take the classes I need.”

For junior Gracyn Lewis, she did not have problems enrolling in courses she needed while she studied abroad in Florence, Italy.

“I was able to enroll in all of the classes I needed to follow my four-year academic plan,” Lewis said.

Lewis added that working with her major adviser and her academic adviser at OneStop prior to deciding to study abroad helped ensure her that studying abroad would not affect her academically. All Pepperdine students are assigned major and academic advisers to help them through their academic careers.

Calandra said she remembers a specific session during the New Student Orientation (NSO) that was dedicated specifically for International Programs.

“I remember during NSO there was a specific presentation for IP and right away they were like ‘Over half the student body goes abroad their sophomore year and everyone should do it,’” Calandra said. “They also told us that it’s so fun, and you won’t regret it and that it builds you as a person.”

Calandra said she felt completely overwhelmed during the presentation, but some of her new friends and classmates had already decided exactly where they wanted to study abroad.

“I’m from Maryland and I just got down here to Malibu, so I’m already far from home and they are already pushing us to leave so soon,” Calandra said.

Pepperdine University is known for its comprehensive study abroad program, where approximately two-thirds of the students participate in at least one of the university’s International Programs.

Cox advised students experiencing difficulties enrolling in classes for the abroad programs to reach out to him, or Beverly Cawyer, the International Programs Manager of Academics and Internships, as they are eager to help the students.

Correction: International Program contracts advise students to seek academic advising before going abroad. This can include completing a four-year plan with an academic or major advisor. There is no additional tuition charge for international programs although there are fees attached to the program in each location.