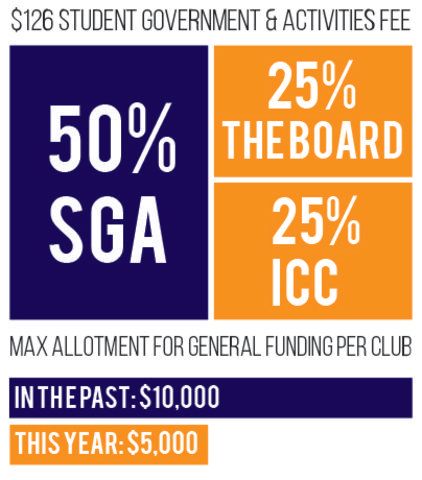 ICC is a resource for approved student-led organizations to receive event-planning information or funding as they navigate the University’s policies and procedures.

“The changes were a direct response to International Programs students taking their portion of the ICC funds with them abroad, which affected the budgets of the Student Programming Board and ICC,” ICC Graduate Adviser Josh Ramirez said.

The $126 Student Government and Activity fee that each undergraduate student pays is broken down as follows: 25 percent to SGA, 25 percent to ICC and 50 percent to the Board, Ramirez wrote in an email.

The maximum allotment of general funding per club was cut back from $10,000 to $5,000 and ICC notified clubs that it would no longer give out money to revenue generating events, Ramirez wrote in an email.

Ramirez wrote that “ICC has not reduced its spending, it has simply reduced the amount of money a single club is able to request from the general fund.”

He wrote that in past years ICC has allocated slightly less than $100,000 for its general fund, $50,000 for its student development fund and $20,000 is set aside as a contingency fund. The contingency fund is used to cover costs a student organization may accidentally incur and the money is put into the student development fund or general fund if the money is not used.

Based on that budget, ICC would only be able to offer the previous general fund amount of $10,000 to 10 clubs, Ramirez wrote.

“With new clubs coming in each year and ICC continually running out of money, which has and potentially will continue to leave some clubs without funding for events that occur later in the year, ICC felt it was time to make this change so that money was distributed more evenly among our student organizations,” he wrote.

This year, ICC cut back LeadCon spending by 50 percent and hiring costs by about 30 percent, Ramirez wrote.

Two student representatives from each club were required to attend LeadCon at the beginning of the school year. ICC’s new policies and procedures were explained during the training session.

ICC is considering other options for clubs that were not able to pass the LeadCon quiz.

Ramirez wrote he hopes that the LeadCon quiz ensures club leaders are aware of ICC’s policies and deadlines. He said the quiz also eliminated the need for time-consuming ICC general body meetings each month.

Ramirez wrote that ICC made the decision to no longer fund revenue generating events because ICC “felt it was unethical for the larger student body to have to pay to attend an event that their student activities fee had been used to fund.”

Clubs can still request money for these events, but the money the clubs want to generate must come from donations, Ramirez wrote.

Valdivieso said she is glad ICC did away with the general meetings because they were often redundant, and she thought LeadCon was able to cover all the necessary information about ICC.

“I am very happy there is no longer meetings throughout the year — attending LeadCon and passing the quiz was all that was needed to gain funding for the club,” Valdivieso said.

Sophomore Kayla Valdivieso, Image Ministries co-president, said she does not think the funding cut will have a big impact on clubs.

“I don’t think it will be an issue and it could be beneficial to helping clubs better budget their money,” Valdivieso said.

Senior Allyson McReynolds, Mock Trial captain and Panhellenic delegate for Alpha Phi, said she was surprised to hear clubs would be eligible to receive less money. McReynolds said this is her third year working with ICC.

“I think that was a huge change and the clubs received zero notice before the announcement at LeadCon,” McReynolds said. “While most clubs probably don’t come close to using a full $10,000, cutting budgets in half is so extreme. Also, ICC isn’t funding Greek philanthropies anymore, which means Greek groups won’t be able to rely on that money to generate more money to donate to charity.”

McReynolds said she is hopeful that ICC will be more organized this year and that the changes will not have a great impact on the campus clubs.

“I appreciate their enthusiasm for their position on campus and think they have made efforts to improve the system overall,” McReynolds said. 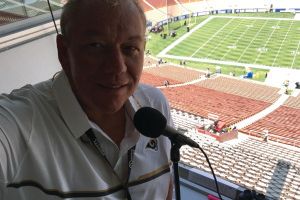 Photo Courtesy of Sam Lagana Imagine your childhood team breaks your heart by leaving your city. You think it's over....
Copyright 2013 Jupiter Premium Magazine Theme
Back to top