Payson Library’s display of artwork created by Holocaust survivors and a screening of documentary film “As Seen through These Eyes” illuminated survivors’ use of art in the face of tragedy.

The Glazer Institute of Jewish Studies and Payson Library collaborated in an attempt to provoke further intellectual discussion among students regarding the Holocaust yesterday in an art exhibit at 6 p.m. and film screening at 7 p.m. 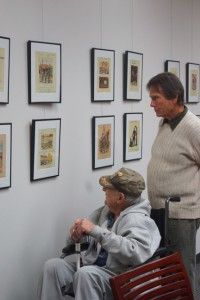 An hour before the screening, attendees mingled and admired the artwork. Sketches by survivor Alfred Kantor depicted everyday life in the concentration camps and German propaganda. Along Payson’s walls lay biographies of each talented artist that found their own unique way to portray life at the time of the Holocaust. The life of Dina Gottliebova-Babbitt, a young aspiring artist who found herself in a concentration camp, was chronicled in a graphic novel. Upon liberation, she continued to study and practice art, moving to Los Angeles to pursue her artistic dreams.

Filmmaker Hilary Helstein’s film was featured in Elkins Auditorium. The film had previously been screened for the audiences such as the United Nations, and it made its way to a Pepperdine audience ranging from students to professionals this week. Narrated by Maya Angelou, the screening of Helstein’s film left the audience noting the power of art to maintain the memory of mankind.

Holocaust survivors Bernie and Juliana “Judy” Simon made an appearance at Payson to view the exhibit and screen the film. Last month, the couple came to campus to share their stories.

“It was wonderful for them to come back to Pepperdine to show support for the art exhibit,” freshman Jessica Arana said. “Seeing them again gave me a more personal connection to them and their stories. I was able to apply their stories to the art and gain a new appreciation for the art’s true purpose.”

In a question-and-answer session following the film, Helstein elaborated on the significance of the role of art as testimony and memoir.

“The film took me over 10 years to complete,” Helstein said. “For me, it’s not about religion, but about why this happened and how these people survived.”

The film emerged after Helstein conducted more than 100 interviews with Holocaust survivors, the ones who have lived these experiences detailed in the artworks. She was immediately inspired by the stories of these survivors, the artists in particular. 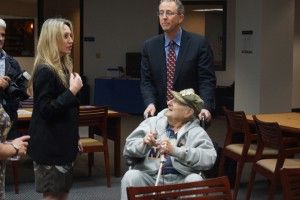 Through the use of photography, art and film, both the Glazer Institute and the University have been working to help students connect with other cultures.

Golbert added: “How do we grapple with conflict as a Christian university as we study moral and ethical dimensions and interfaith relations?” She said the exhibit of art will help students and their communities begin and continue these conversations.

The touring exhibit of Holocaust art, “Art Survives,” is located on the second floor of Payson Library and will continue to be on display throughout the month of February.

“The artwork shows the beauty of their community through this nightmare,” LaZebnik said. “This is the portrayal of feelings in the concentration camps, through art.”

Professors teach their pet subjects well. I took spiritual writing with John Struloeff, who happens to be writing a book...
Copyright 2013 Jupiter Premium Magazine Theme
Back to top