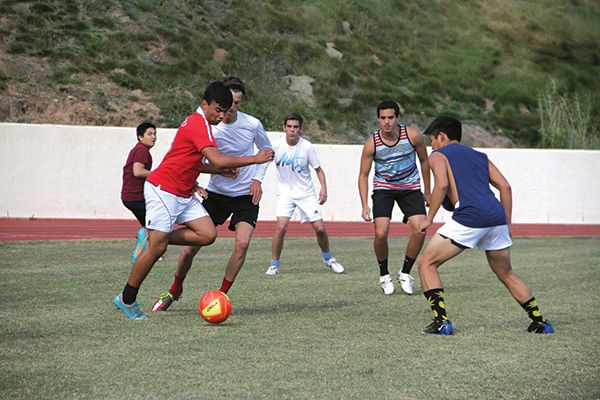 International Programs kicked it up a notch Friday when they hosted the first ever IP World Cup at Tari Frahm Rokus Field.

London, Florence, Lausanne, Shanghai, Buenos Aires and Heidelberg squared off against each other in a single-elimination style soccer tournament on sections of the field, using track hurdles as goals. The games were played four-on-four in nine-minute halves. Participants included a mix of program alumni and freshmen set to go abroad next year.

“There was a big emphasis on soccer in every country that I traveled to,” Hwang said. “I thought this would be a fun event to bring together the people who went abroad and the people who are going abroad.”

He said that IP staff members and program ambassadors helped him organize the tournament that turned out to be a success. Throughout the matches, the most popular word thrown around to describe the day was “fun.”

Each program waved their country’s flag and enthusiastically cheered on their teams. “It was fun seeing them play as a team outside of orientation and official meetings,” London IP ambassador junior Whitney Hagstrom said of her soccer squad. “And their amazing soccer skills — I had no idea they could play that well.”

Ultimately, Heidelberg stole the show. They edged out Florence in a shootout to advance to the finals, in which they then toppled Lausanne to take the championship title.

“It was a great time to see everyone’s passion for their programs,” Heidelberg team member freshman Ryan Luck said. He added that winning “felt great. I just want to go sing the national anthem now.”

To make victory sweeter, the award for winning not only involved the glory of bragging rights, but also an actual prize. What that prize is exactly will be announced to the Heidelberg group during the March 29 IP orientation.