By By Breanna Grigsby 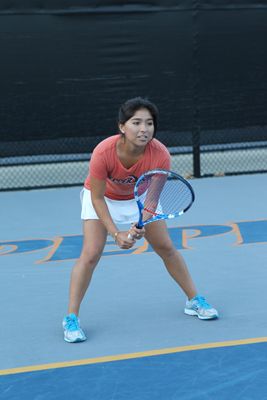 Alejandra Granillo’s father brought her up on the principle that “if you really want something, you can achieve it.”

For the sophomore, these few words have been the inspiration for success on- and-off the court. The Pepperdine tennis star has played for the Mexican National team, has been ranked No. 1 by the Women’s Tennis Association, and is ranked in the top 500 worldwide.

Granillo is originally from Pachuca, Mexico, where she has played tennis since she was 9 years old. “My dad taught me how to play,” she said.

She said she regards the poor and homeless as an inspiration as well, and is passionate about helping them. “I would always give money I won to them,” she said.

She also wants to help people internationally, which is why she chose International Studies as her major.

Granillo has played tennis worldwide and the many perspectives this gave her fueled her passion to help others.

“I was always interested in different cultures,” she says. She would like to work in an embassy one day to be on the forefront of change for people who may be powerless to help themselves.

She graduated from Instituto Hidalgo, in 2010. “I never expected to come to school in the U.S,” she said.

She ultimately chose Pepperdine because of the atmosphere and the opportunities she knew she would have.

“The coaches were very nice and everyone was very friendly and accepting of me,” she stated.

“Thanks to tennis, I have what I have now,” Granillo said. This past summer she competed in the Universiade, Olympics for university students. in Shenzhen, China with the Mexican National team.

The team won a bronze medal in women’s doubles and finished the competition at No. 8. “It’s not easy to transition from the pro circuit to college tennis,” Head Coach Gualberto Escudero said. “[Alejandra] is working very hard, both on and off the court.”

In tennis, players must compete not only with other teams but also with one another, and at just 5-feet-2-inches tall; Granillo must fight hard to come out on top.

As an international player in the U.S. arena, she must also work harder to prove herself. Granillo gives an intensity and focus to her matches that add excitement and gravity to those watching her from the stands.

“We’ve been working really hard,” she said. “We’ve been playing the best schools and we have big expectations for the end of the season. The team’s goal is to win the WCC Conference, which the women’s tennis team has done all but four times the championship has been held.

“I’m very happy to have Alejandra on our women’s tennis team,” Coach Escudero said. “Ale is a great fighter and it helps out team to see her fight as she does.”

Granillo’s teammates appreciate and admire her as a person and teammate.

“Ale leads by example, she doesn’t talk much, but I know that a lot of the girls on the team admire her hunger and it really does inspire us,” Khunpak Issara stated.

As a freshman, Granillo went 7-8 in singles and 12-5 in doubles. Along with her doubles partner last semester, Issara, became team-best going 10-2, and were ranked No. 49 on the ITA doubles poll.

The team is ranked nationally at No. 35. Granillo is currently 14-11 overall and 3-3 overall in duals with current partner Junior Arianna Colffer. She was named WCC Singles Player of the Month in September 2011.

“I have enjoyed playing on the same side of the court with [Alejandra],” Issara said. “She’s always so encouraging. She works hard on and off the court, she will so extra biking or running on top of everything else that we do and we do a lot,” she added.

Colffer considers herself lucky to be on the team with Granillo. “She is so intense in her matches and she never gives up,” Colffer said. “You know that you can count on her to always try her best no matter what,” she added.

As the Pepperdine community grieves over the loss of Maurice Hilliard, Granillo reminisces on the impact he had upon her life. “He would make you feel so powerful and happy,” she remembers. “He was someone that was there for everyone and he was just amazing.”

She remembers that just a few days prior to his passing she wanted to talk to him. She never got the chance to however, and her words of advice are “if you want something you have to do, do it at that moment.”

Fulbrighters chosen to brighten the world

At 66 years old, most people’s leisure activities would likely involve strolls along the beach, reading a good novel at a coffee...
Copyright 2013 Jupiter Premium Magazine Theme
Back to top