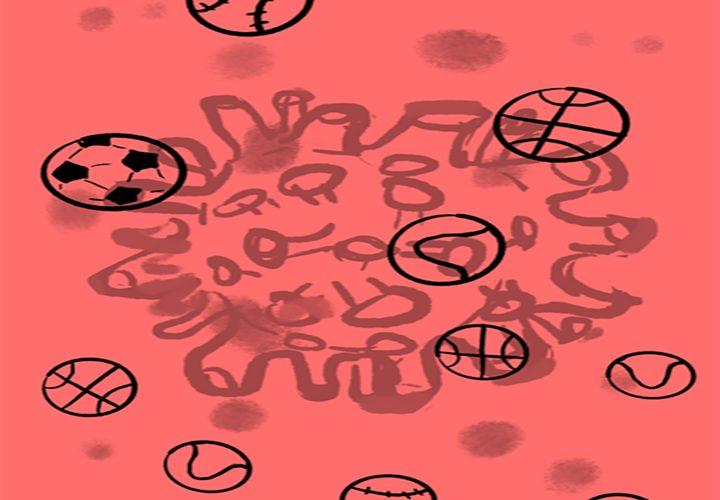 COVID-19 looms in the mind of sports governing officials as they prioritize the health and safety of student-athletes but attempt to return to normalcy. Art by Ally Armstrong

Athletes at every level are dealing with the uncertainty and reality that their sport could be canceled and their season over in an instant. Fans are not allowed to attend competitions, and injuries are no longer the primary reason why athletes might miss practices and games.

Every level of sport — from pros to college to high school — is handling the pandemic differently. While each association wants to bring back its athletes, the necessary protocols are challenging and unique.

Many sports require physical contact, and social distancing is impossible on a court or a field. There is not a one-size-fits-all model for sports, and it could mean delayed, postponed or canceled seasons.

The decision does not affect FBS football, as the Football Bowl Subdivision sponsors their fall championships. The FBS includes the Power 5 conferences and other Division 1 conferences.

Of the Power 5 conferences, the Pac-12 and Big Ten have announced they will not play football this fall. The Big 12, SEC and ACC, however, intend to play football in some form this fall, according to an article from ESPN.

The National Association of Intercollegiate Athletics (NAIA) moved its fall sports to the spring of 2021 after a vote on July 28, according to its website.

All athletes will receive their athletic aid or scholarship whether they opt out, participate or are unable to compete because their season is canceled.

Fall athletes will likely be given another season of eligibility if their season is canceled, though decisions on whether to provide scholarships for fifth- and sixth-year student-athletes would rest with individual schools and programs. After spring sports were canceled, the NCAA announced it would grant an additional year of eligibility.

For athletes in high school, the decision on fall sports is more complicated. The NCAA is the governing body for most college athletic programs; however, in high school, each state association decides how its sports operate. There could be 50 different decisions made that dramatically affect high school sports.

California decided to move back the start of fall sports until January, with two athletic seasons instead of three.

“The CIF worked diligently to create a season of sports calendar that offers an opportunity for as many student-athletes as possible to compete in league, playoffs and championships competition,” wrote Rebecca Brutlag, the media relations officer for the California Interscholastic Federation.

New York is another state that decided to move its fall sports season until the spring, beginning in March.

“The decision was made by our officers and executive director, with input from the Task Force. We want to give NYSPHSAA [New York State Public High School Athletic Association] student-athletes the opportunity to compete, in whatever form possible. The officers, executive director and membership of NYSPHSAA supported this decision,” wrote Chris Watson, the director of communications for the NYSPHSAA.

Washington and Virginia also voted to move their fall season until 2021. States such as Florida and South Carolina have delayed the start of their fall sports. States including Oklahoma and Nebraska are starting their fall sports as normal, according to an Aug. 7 MaxPreps.com article.

Nebraska said in its statement that it will continue to monitor the health and safety of its athletes and that modifications may be made, according to an article from News on Your Side.

The NBA made its return to games July 30 with 33 teams after a four-month hiatus. The plan is to conclude the season Oct. 13 with an NBA champion. The NBA created a “bubble” system in which players and team officials — trainers, coaches, staff — are living under strict rules and regulations at Walt Disney World in Lake Buena Vista, Florida.

Players arrived at the bubble in early July and were required to practice social distancing and wear masks. If players were concerned about COVID-19, they were not required to go to Disney.

If players test positive for COVID-19, the NBA protocol calls for them to enter isolation housing immediately, test again and then exit isolation only once consecutive negative tests occur. To help stop the potential spread, common practices like hugs, high fives or licking hands are discouraged.

As of Aug. 5, the NBA had no positive tests in three weeks, according to a USA Today article.

Major League Baseball has taken a different approach for its season. There is no bubble for its players, with a 60-game season as opposed to the normal 162-game season. As with the NBA, players can opt out due to COVID-19 concerns.

Due to the outbreak, MLB and its players association have implemented new safety protocols. Players and staff must wear face coverings everywhere except on the field, including the dugout and bullpen.

Other measures — like the home team providing outdoor covered spaces for rain delays and prohibiting athletes from going to large group gatherings — have also been put into effect, according to an article from CBS Sports.

The NFL started its training camp July 28, and there will be no preseason games. There is no bubble, and a player can opt out due to COVID-19 concerns and receive a $150,000 stipend.

After many NFL players said they were concerned about their safety, the NFL and its players association established new measures to help players minimize risk, as stated in a Time article.

Players will be tested daily for the first two weeks of camp, and if the positive rate is below 5%, then testing will move to every other day, according to an article from NFL.com.

Players will wear proximity recording devices during all team activities, such as practice, meals, films and games. The NFL has contracted with a national lab to handle all 32 teams so the league’s testing needs would not drain the local market, and players and staff can expect test results within 24 hours.

The NHL is playing this season in a bubble. The league resumed its season July 13 with 24 teams playing in Edmonton, Alberta, and Toronto, Ontario. Teams are limited to 52 people in their party, which includes players, coaches, trainers and security members.

Testing is done daily, and if a player experiences any symptoms, they must immediately undergo self-quarantine and testing.

A positive test requires the player to self-isolate, and a negative requires them to remain in isolation until another test is administered the following day to confirm the negative, according to an article from NBC Sports.

The NHL has not had a positive test since restarting its season July 13, according to an article from ESPN. 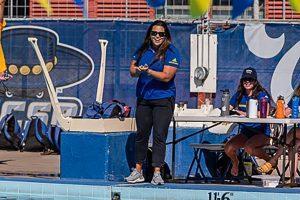