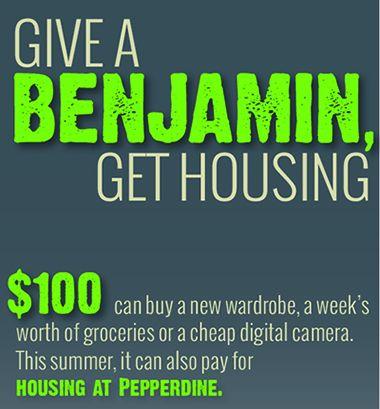 Students occupy about 25 percent of housing beds during the summer. The other beds are either filled by conference guests, or they undergo renovations or facility maintenance.

“The dean of Seaver College made the decision to reduce the room cost on the Malibu campus and eliminate the IP program fee [during the summer],” Seaver Budget Manager Jody Semerau said.

“Both incentives were to increase enrollment during the summer session and give all students the opportunity to enjoy reduced costs if they were going to attend summer sessions,” she said.

Only students enrolled in one unit or more are allowed to stay in Pepperdine summer housing.

“We want to have a great summer program, but we also want students to graduate in four years,” Associate Dean of Students Brian Dawson said.

“If a student takes on a double major or has a road block that they need to drop a class along the way, then summer classes are the best way to stay on track,” he said.

Dawson said he anticipates that a greater number of students will now attend summer school.

He said he plans to “advertise the program soon, and students can sign up for summer classes and summer housing in November at the same time you sign up for spring classes.”

Dawson said Lovernich and Towers housing will be the primary student locations for the summer.

Junior Lizzie Fichtner decided to attend summer school in 2012 because after adding a minor in creative writing, she didn’t want to take more than 18 units during the academic school year.

She said she thought it would be a smart idea to get some classes out of the way during the summer.

“It was stressful to have to pay $1000, or whatever the exact amount I paid, to be able to live on campus while I took only one class for just a short month,” Fichtner said. “My parents were mad because it was a lot of money for just one class.

“Cheaper living will definitely make summer school more worth it, and it will make more sense to live on campus during the summer,” she said. 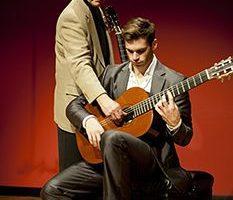 Photo Courtesy of Patrick Park Chair of Classical Guitar Christopher Parkening has a reputation for attention to detail....
Copyright 2013 Jupiter Premium Magazine Theme
Back to top