Senior Ava London has an hour-long commute from her apartment in North Hollywood’s Arts District to Pepperdine four days a week.

“I love living there,” London said. “It’s so different from Malibu and everything is so convenient.”

London said she has been living in that apartment since August, before the semester started. She decided to live there to be closer to her job as a personal assistant to a composer in Hollywood.

Although London said she appreciates the proximity to her job, the commute to Pepperdine can be an unavoidable financial strain when gas prices go up.

On Nov. 1, California enacted a gas tax that raised prices by about 12 cents. In addition to that, the Automobile Club of Southern California reported that the month of October saw an abnormal increase in demand for gasoline and as a result, caused some supply chain issues. The supply chain issues and the increase in demand drove gas prices up by 20 cents, which meant a strain for commuters, including Pepperdine students.

Marie Montgomery, a spokesperson for the Auto Club, said the average price for the Los Angeles-Long Beach area is $3.30 a gallon, which is the highest gas prices have been since September 2015. As of Wednesday, the average gas price in Malibu is $3.42.

“In 2016, we had a quite a bit of relief because domestic oil benefitted in terms of prices,” Montgomery said. “Now we’re having a week over week increase of 20 cents.” 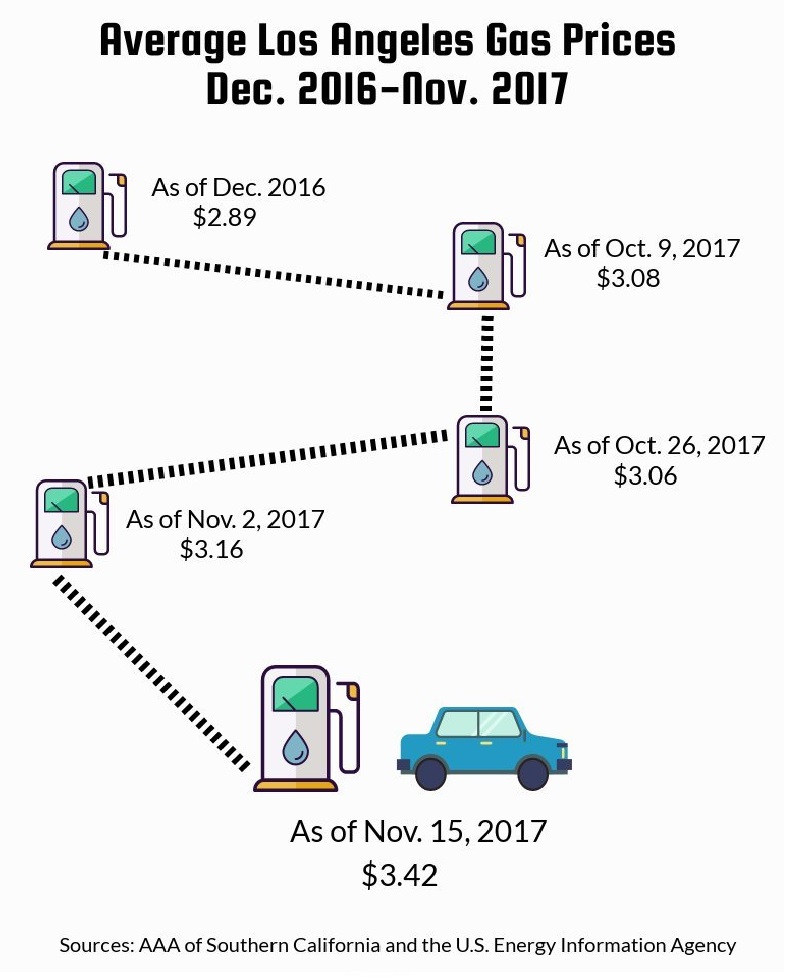 Montgomery said that when the gas tax went into effect, nine of the 12 cents of the increase came from other issues related to the national supply of gas.

“The supply issues were related to [Hurricane] Harvey in the sense that refineries needed time for maintenance but were delayed because the hurricane shut down the Texas refineries,” Montgomery said.

In addition, October saw an unusual surge in demand for gas which drove prices up. Montgomery said that the demand increased because the economy has been improving and people are more likely to go out and spend money.

“It was a historic week for gas prices,” Montgomery said. “A one week jump of 21 cents is significant.”

Senior Chris Rodgers lives on Sawtelle Blvd. where the 405 meets the 10 freeway. He fills up his 2014 Jeep Patriot about two times a week with an average of $30 a tank. Since the gas tax was enacted, he said he has relied on his Costco membership to get better prices. But it’s not always possible to use the membership because Costco gas stations can be “out of the way.”

“It sucks that gas prices are so high,” Rodgers said. “But it’s part of the cost of living here.”

Rodgers said that the gas price fluctuations have made him more conscious of how he spends his money.

“Gas prices have influenced how much I want to drive,” Rodgers said. “When they fluctuate, I don’t make extra trips.”

Montgomery said that in southern California, on average, people start to restrict driving when prices get around to $4.00 a gallon.

Although prices may not be stellar at $3.42 a gallon, Montgomery said that prices should be getting better closer to Thanksgiving.

“During the holiday season, prices don’t surge,” Montgomery said. “Demand goes down and prices go down because there are fewer drivers on the road.”

For the times when commuter students have to make do with the higher gas prices, Montgomery said that AAA has a free app feature that shows the cheapest price of gas in an area. Other Pepperdine commuter students recommend the Gas Buddy app, which lets users compare gas prices.

Montgomery also said that commuters can save money and weekly time at the gas station by improving their fuel economy.

“A lot of people feel like they don’t have control over the price of gas,” Montgomery said. “But, they do have control [over] how much gas is used.”

Montgomery said that driving at a steady speed instead of speeding and “jamming the breaks” can account to about a 20 percent savings. Likewise, car maintenance can make a big difference.

“Keeping your tires properly inflated and checking them every other gas fill up will make a difference,” Montgomery said. “If your tires are underinflated, you waste gas. Also, keeping your car maintained according to the owner’s manual, will have your car be in much better shape.”